Following the events of part eight, I spent some time running around the Ashina Outskirts. Eventually, I found the shinobi firecracker in the hands of a merchant on top of a hill. Talk about making a mountain out of a molehill. Thank you, I’ll be here all night. Tip your servers.

Despite securing the firecracker, I wanted to return to Okami’s past. I thought that if I killed Juzou the Drunkard aka Chonky McSpew, I’d complete the flashback and fill the gap in Okami’s memory. This proved a faulty assumption, but more on that in a moment. 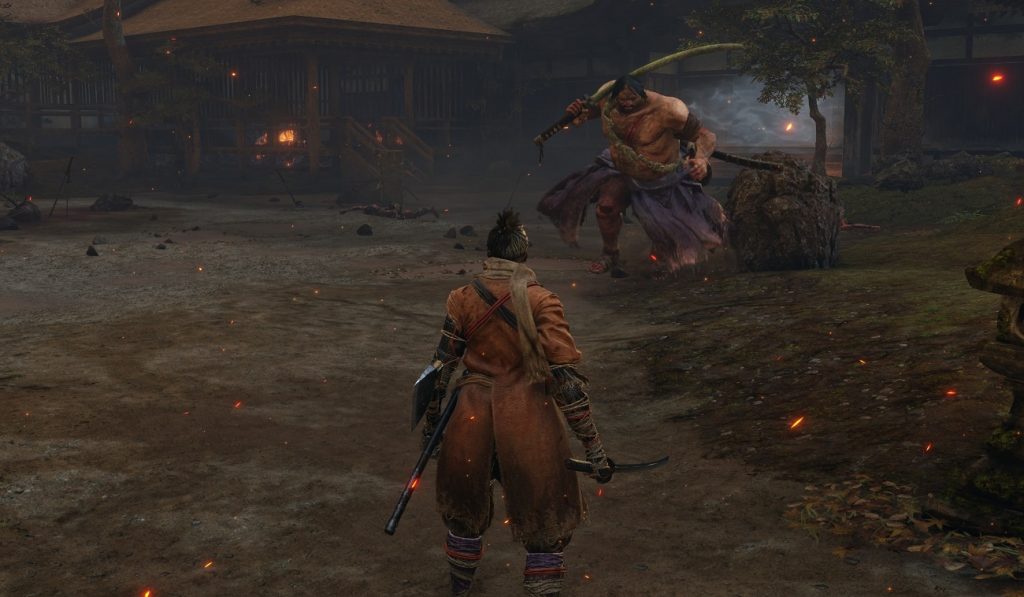 He drinks sake and spits poison…cool.

With past failures fresh in my mind, I reined in the urge to run through the Hirata Estate’s coy pond with my sword swinging. Instead, I snuck around the edges of the map, bringing down Juzou’s henchmen until there were only two left. Thus began Operation: You Run Me Right Round, Baby, Right Round, Like A Shinobi, Baby, Right Round Right Round.

If I’ve learnt anything in this game it’s that one always wants to be dueling. Even the most incompetent of swordsmen can do a world of damage when they have a two-on-one advantage. Instead of trying a simultaneous fight against Juzou’s shield bearers, I let them chase me around the coy pond like Japanese Benny Hill until I could corner and carve one of them. Only when the two-on-one advantage was mine did I recruit the samurai standing in the reeds to my cause.

This is another moment in the game where I wonder if my actions are going to have consequences beyond the immediate swordplay. If I had been just a little faster, the samurai would not have died during the fight. Who was he? Did he have a role to play beyond being another person who bade me save Lord Kuro? I suppose I’ll never know.

Much to my surprise, Juzou was not the final boss in Hirata Estate. I mean a drunk guy who spews poison seems an ideal ringleader for a group of thieves and bandits who plunder in their underwear. Or maybe they are dressed that way to take the piss out of the tendency for video games to put women in non-functional armour. This game’s politics aren’t exactly transparent. 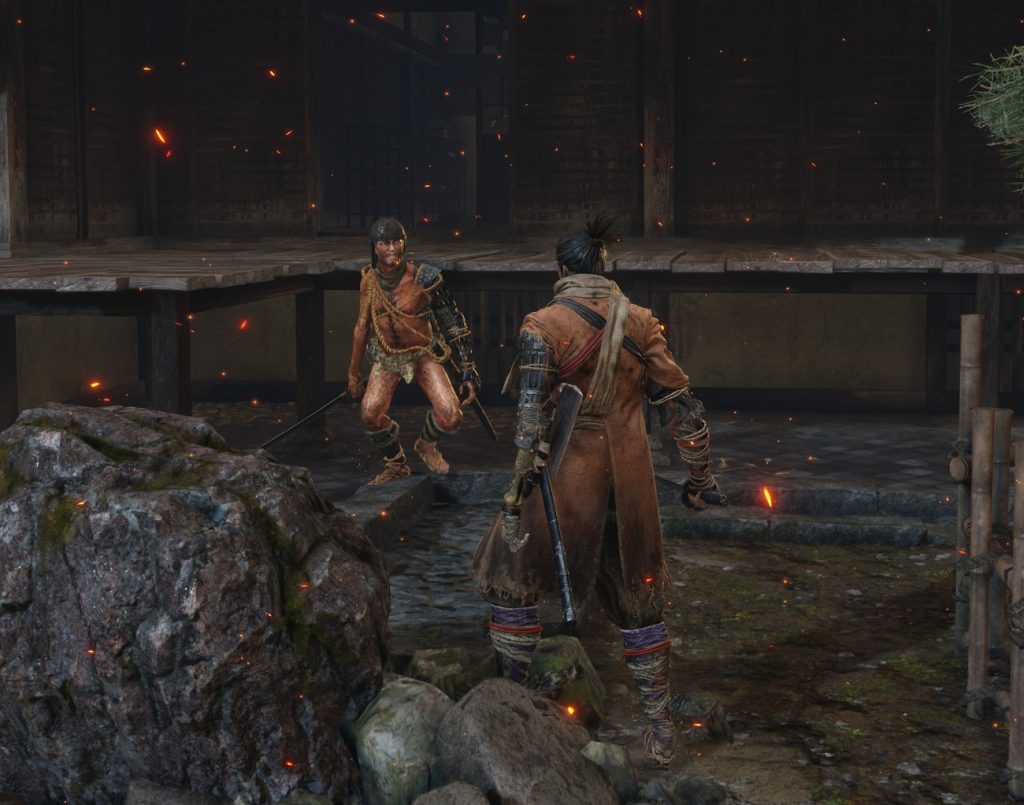 Inside the estate, an elderly ninja lady called Lady Butterfly was waiting for me.

A note to my readers: my wife observed that Lady Butterfly was kicking my ass for at least an hour and a half. Thereupon, she commented that “Madam Butterfly” seemed to be particularly adept at beating me up. I suppose opera is more powerful than any shinobi. 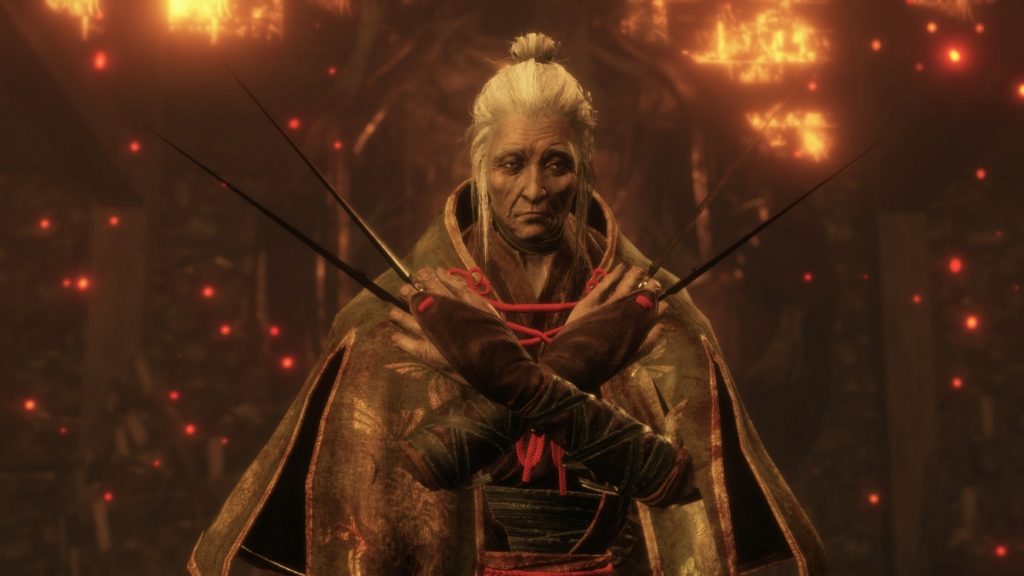 Eventually, I struggled through the fight and bested Lady Butterfly in an epic posture battle that put the entire Purple Shinobi debacle into context. It was a mighty success for Shaftoe and Okami. Then the old lady got up and the fight extended into a second round with a new move set.

I died once before fucking off back to Okami’s present.

This led me to General Gyoubu Oniwa, also known within the game as Gyoubu the Demon. I was disappointed he wasn’t an actual demon. After spending far too much time losing to Lady Butterfly’s devil daggers, Gyoubu proved to be something of a pushover. The firecrackers scared his horse, as expected, and during the windows of equine panic I chipped away at his health. The occasional grapple on to the mounted general made life somewhat easier, and balanced out his mobility advantage. Beyond that, there wasn’t much to the fight with the ersatz-demon. Block block block. Chop chop chop. I didn’t even get a good picture of him. Compared to Lady Butterfly and the purple shinobi, the general proved mediocre. 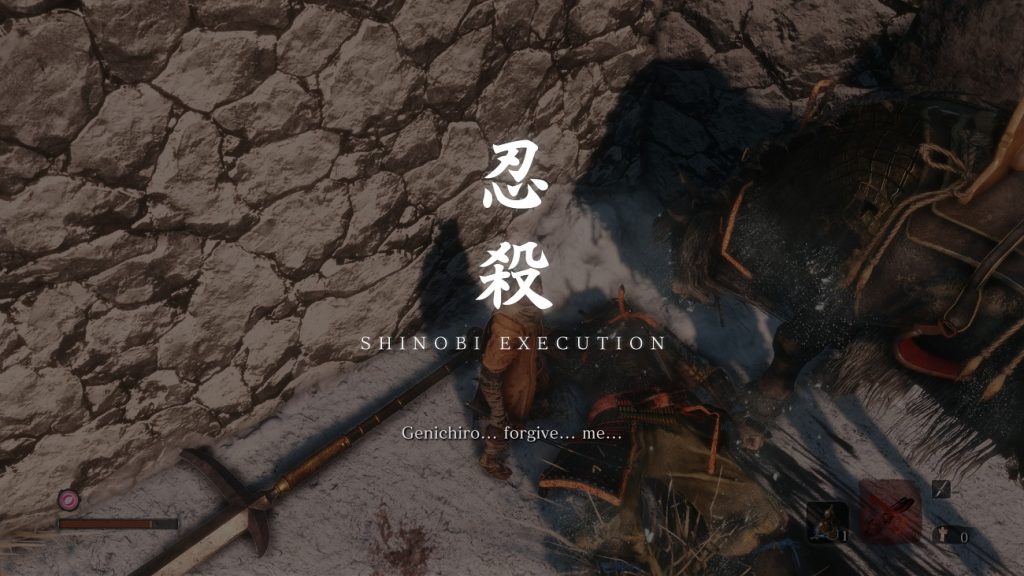 I thought he would be harder, so I didn’t think to snap any pictures until after he was dead.

Defeating Gyoubu bestowed a memory of swordplay on Okami. There was some world building bound up in this memory, and much like my first introduction to Dragon Rot, the nuance was somewhat lost on me. The bottom line is that the memory made Okami stronger, which means I intend to pay Lady Butterfly another visit to settle accounts.

In a final twist, General Gyoubu’s death sees the birth of Okami as Sekiro. As I explored around what I presumed to be the last area of the Ashina Outskirts, I came upon a man in a mask calling himself the Tengu of Ashina. He calls Okami the one-armed wolf, and then asks him to join in hunting down the rats who have infested Ashina. Since the rats seem to be more purple fucking shinobi, I said yes. He then decided that Okami needed a name and dubbed him Sekiro.

It took seventeen hours of game play for me to find out Okami is, in fact, the game’s titular character.

Before beginning my travelogue of the Ashina Castle, proper, I want to flash back to the memory between Kuro and Lord Genichiro I mentioned waaaaay back in Part 6. Back then, I was sneaking through a fortress and noticing the covered but noticeably unburied bodies. The memory between Kuro and Genichiro happens overlooking this scene of past death. 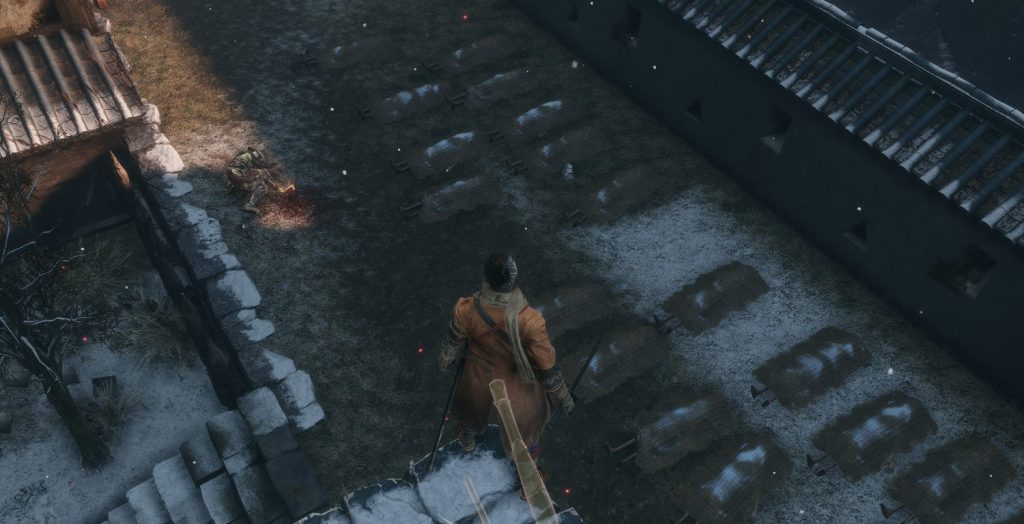 Things are not going well for Genichiro

This moment of exposition provides a sense of scope to the game’s conflict beyond the command to “save Kuro.” We know that Genichiro is a usurper. He’s brought Ashina into rebellion against…the Emperor…the Sho-Gun…I don’t know…it’s a rebellion. The general tells Kuro that the Internal Ministry’s army is too strong, and that Ashina will not hold against them. The General needs Kuro to use his dragon blood and make an army of revenants, which is why the corpses have been left above ground. Kuro, for his part, is reluctant to oblige the request. He fears that this use of his gift would create an army of monsters and twist Genichiro into a being of boundless cruelty. I mean, he doesn’t seem like a particularly great guy to begin with. Somehow I doubt that transformation would be a particularly long road.

Still, it’s an interesting scene. Genichiro seems perfectly capable of taking what he wants, but he’s trying to win over Kuro’s heart and mind. This invites a further question on why he is in rebellion. What could be so important to him that he would turn his own men into revenants? How much Dragon Rot would be loosed on the world if a hundred men, let alone a few thousand, were gifted the blood? What is the end game beyond destruction?