At the time of this post’s writing, the video game world is about a week past the height of the social media flap that was some very smart opinions on accessibility in Sekiro being met with jeers and shitty hot takes from the cheap seats. For the record, I’m neither an expert on accessibility as it relates to video games, nor do I suffer from any sort of disability that prevents me from enjoying a game. In this moment, I am two things:

So what follows is my attempt to engage with just the smallest piece of this disability narrative in a way that is hopefully meaningful and respectful.

My  heroic struggle worthy of story and song against Lady Butterfly, the final boss at the end of the Hirata Estate flashback arc, was brutal. I haven’t been keeping myself on the clock in terms of time spent per boss, but if I had to guess, I’d say I devoted three hours of my life having Lady Butterfly mop the floor with me. The two-stage fight demanded absolute focus, patience, precision of movement, situational awareness, and at least medium-grade reflexes. I came close to beating her on a few occasions, but even after beating the Flaming Bull (more on him in a moment) and leveling up Okami’s Shuriken, thinking it might do a little more posture and physical damage against Lady Butterfly, the fight was still an edge-of-the seat nail biter. It was also the first time I contemplated that I might not have the right stuff for Sekiro. And I think that’s where the crux of the accessibility debate comes into play.

The fight against Lady Butterfly proves a huge revelation in terms of building Okami’s character and developing the relationship between Lord Kuro and Okami. I was only able to experience this bit of storytelling because my body has the physical wherewithal to power through a difficult piece of game play. Physical limitations, such as carpal tunnel or even low-grade arthritis, would have stopped me from being able to lean into Lady Butterfly’s abuse. For someone with more severe issues, or someone using a modified interface to the game, I have a hard time imagining how they could ever “get gud” enough. In such a scenario, what is someone to do when the game wants to push them past their physical limitations for the purpose of artistic expression?

It seems cruel, short-sighted, and intellectually lazy to say not everything has to be for everyone. We wouldn’t propose that about any other form of art, would we? To the best of my knowledge there are no art galleries that demand a person run a four-minute mile before they can look at some paintings. Should such a gallery exist, I think we could rightly condemn its proprietor as an utter and unmitigated asshole. At the same time, Hidetaka Miyazaki is entitled to making the game he wants to make. So rather than trying to split hairs between opposing forces, let’s ask a more interesting question: is Miyazaki’s artistic vision something that is engineered to be unfriendly, perhaps even indifferent, to a certain set of people with disabilities? Or is this a case where exclusion is an unintended, but none the less extant, side-effect of design? I am inclined to think the latter, and here’s why.

First, this is a game centered around a guy with a disability. Okami’s prosthetic presents as a Swiss Army Knife of functionality, and effectively empowers him within an able bodied world. 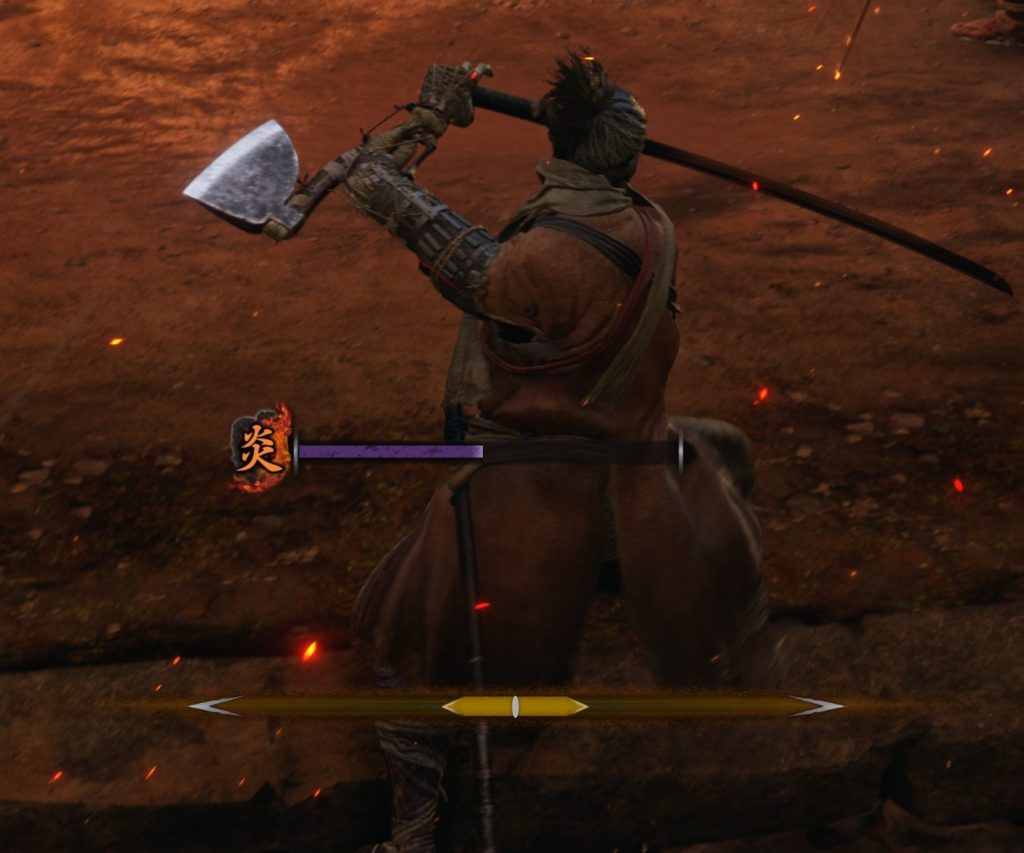 That is, indeed, an axe build into Okami’s arm. He also has a flame blower, and shuriken launcher

However, there’s no exploration of his life as anything other than an able bodied, if mechanically augmented, character. Much like Venom Snake in Metal Gear Solid V the disability becomes a prelude to super powers, and not something that makes the character (or player) feel like an outsider. Bearing this in mind, I don’t think we could say this is a game that “gets” disability or is attempting to create understanding through that lens. Ergo, it does not get a free pass. What we do see is a clear thread of empathy running through the story. My next boss fight illustrates this point.

Before I settled accounts with Lady Butterfly, I poked Okami’s nose into Ashina Castle, having defeated General Gyoubu back in Part 9. I didn’t have to do much exploration before meeting the game’s next boss, the Flaming Bull. The FB is exactly what it sounds like. I walked into an area to find myself confronted by a bull the size of a dinosaur, in keeping tone with the game’s theme of oversized animals. Some of General Genichro’s men had tied a bale of flaming hay to the bull’s horns in an effort to make a biological weapon they could use against the Shogun/Emperor/State’s armies.

Defeating the raging bull (see what I did there?) was easy compared to what I had endured at the hands of Lady Butterfly. I put the bull down on my second attempt. And in the moment that the bull fell for its dirt nap, the moment where my control over Okami ends and his actions become scripted, he crouched down and caressed the bull’s face. This wasn’t a case of the player wanting to pet the dog, so to speak. This was a conscious design choice. The wolf offering comfort to the bull. It is a surprising, but not unexpected moment of emotional resonance. Everything about the game, so far, works to style Okami as someone who kills but isn’t a killer. He, like the bull, is obliged to kill because of the system in which he finds himself. A shinobi is sworn to their master, no more able to break free from that obligation than the bull could knock the smoldering hay from its horns. In this particular set piece, the player is meant to feel compassion for all involved. 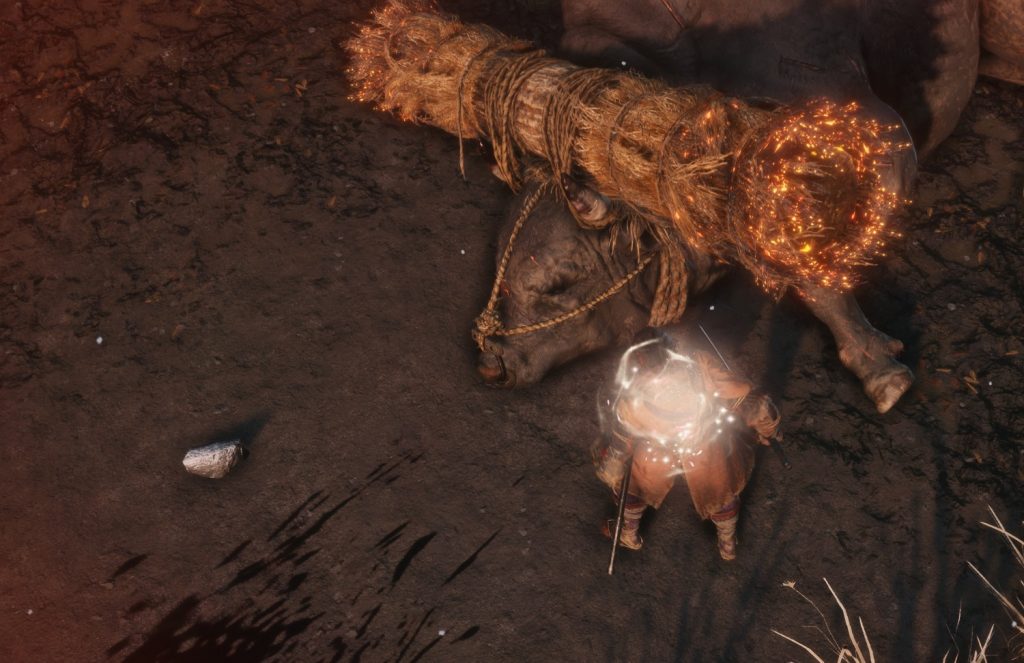 Both slaves to their system

Which brings me back to the Butterfly. Despite the fact that this duel was an absolute cluster fuck on my part. I want to pivot from the point at hand to take a moment to admire the framing of this scene. The long walk to a foe framed by burning architecture. This moment gave me pause. More than any other fight in the game, to this point, I knew that the throwdown between Okami and Lady Butterfly was something big. One doesn’t invite camera angles that bleed with majesty for just another duel. 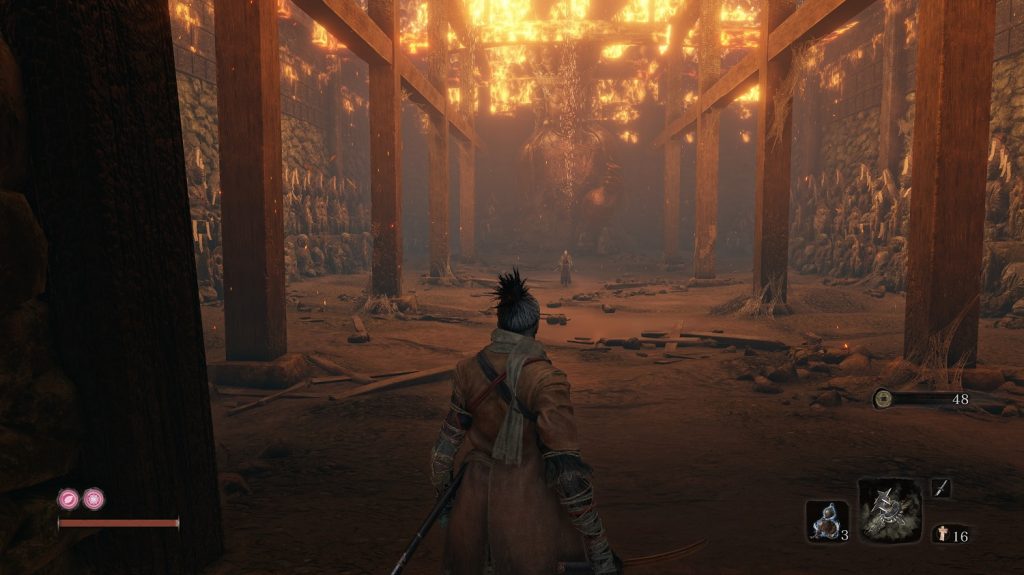 Remember, you can click to enlarge all of these. 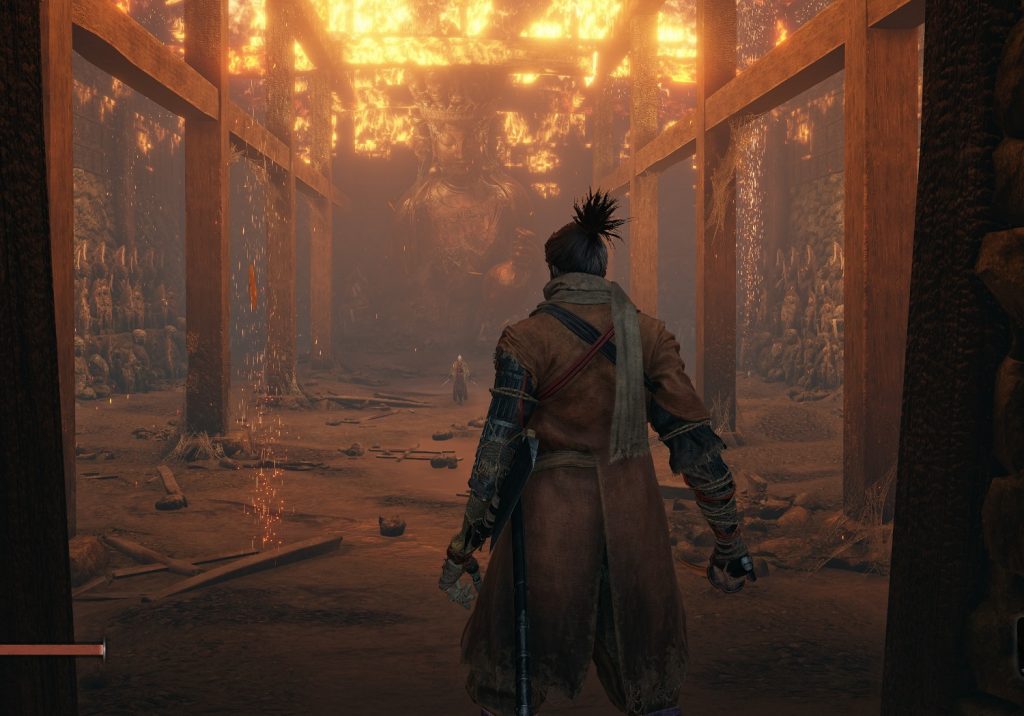 This is a shot that screams shit is about to get real.

And when I finally, after what felt like an actual hundred attempts, beat her, the game gave me my payoff. 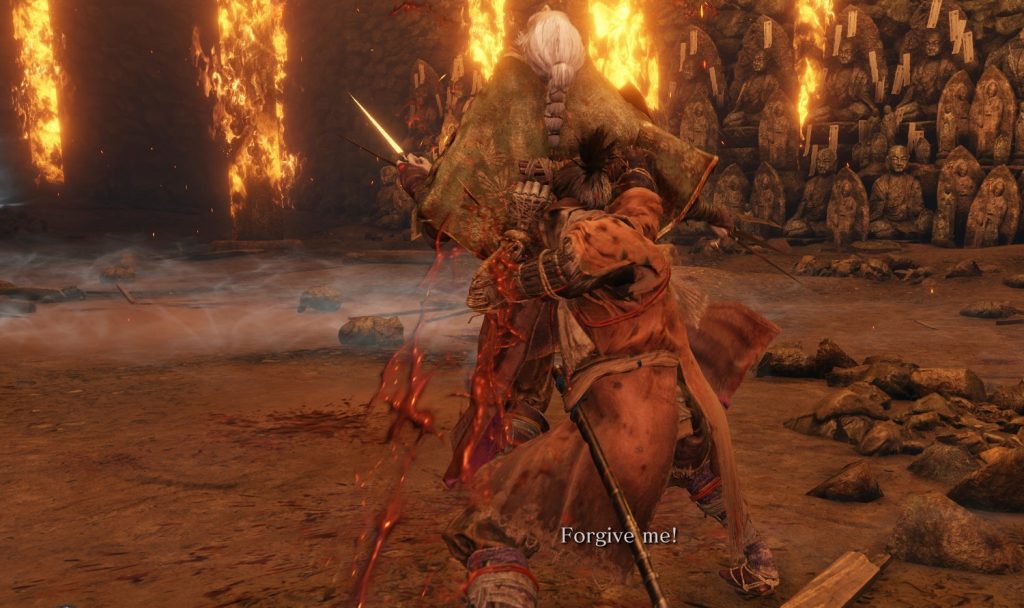 The fight was hard, and this scene was hard.

Okami’s done a lot of things, but he has never apologized to someone he has put to the sword (bonding with the Bull notwithstanding). Then, as Okami starts to do a heroic walk out of the burning estate, a mysterious sword impales him from behind. The scene fades to black, but flickers back to life amid Okami pinned under burning debris. Lord Kuro appears and begins shouldering beams out of the way before sharing his gift. The memory of Hirata Estate is the memory of Okami’s obligation to Lord Kuro becoming an eternal one – one that comes at the cost of the people around him. Perhaps that’s why he starts the game alone in a sewer. He couldn’t keep dying and coming back at the cost of people around him.

“I can not throw away such loyalty,” says Kuro.

I suppose that answers my question about if Okami was infecting people in the past. Probably not.

Upon returning to the rundown temple, I cashed in the memory of defeating Lady Butterfly for a power upgrade. It was disappointing to see the history between Butterfly and Okami relegated to flavour text. The fact that Owl, Okami’s father, retained Butterfly to teach his adopted son the shinobi arts seemed like a grander plot point. Then again, the game showed me everything I needed to know about their relationship. The difficulty of the fight, from my point of view, was absolutely befitting a student taking on his former mentor. The words, after the fact, served only to tie together the narrative fabric that was already in place.

With the fight of a hundred deaths behind me, there was only one thing left to do before taking a break. It was time to heal the world. 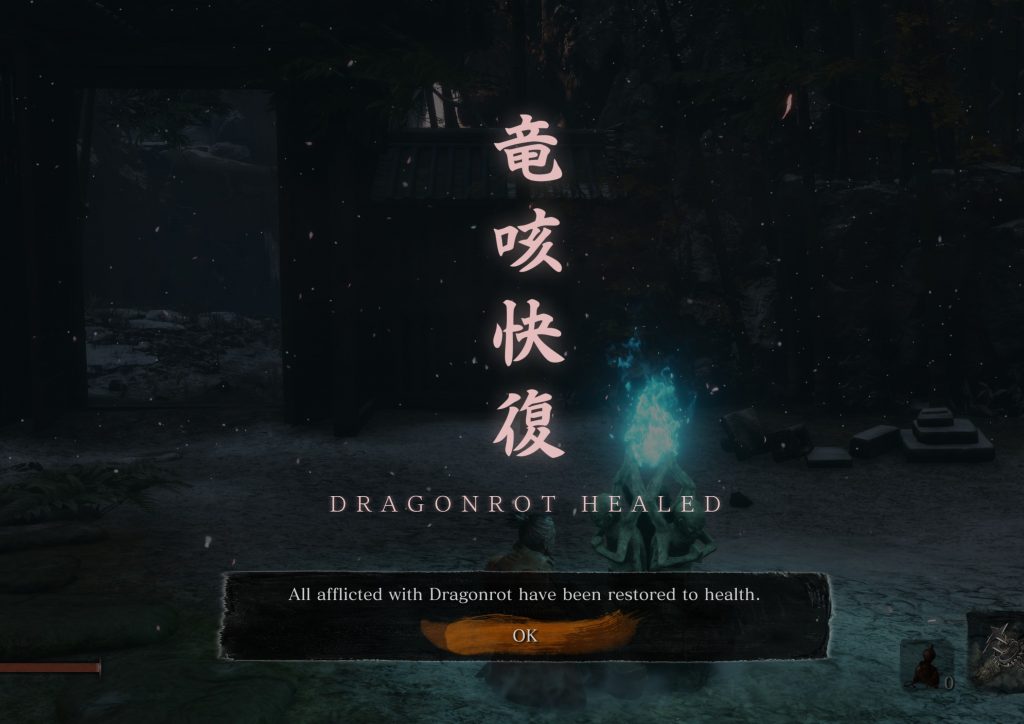 Shinobi, heal the people around you to heal yourself.

And this is why I don’t buy into the argument of intentional indifference to accessibility within the game. There are too many plot points, too many mechanics within the game where caring about other people is a first principle. The question of accessibility feels like a very big blind spot that now, in the aftermath, we should reflect upon in a meaningful way. Because this is not a game that is friendly to anybody who suffers from anything that hurts their reflexes, hand-eye coordination, or ability to hold a controller. The game stumbles on that point, but it doesn’t mean we toss the whole thing.

From where I sit, Sekiro should be something that future game designers examine to see how they can convey character development through gameplay that doesn’t shut people out. This doesn’t have to be a compromise; difficulty and accessibility can coexist. Soulsborne games are, at their core, in their DNA, not about taking pride in beating something hard. They are about completing a long personal journey. They invite reflection and contemplation, and that is lost among the loud-shouting “get gud” crowd. An accessibility success on this formula is one that allows more people to take that journey.