Having breached Ashina Castle’s outer-most wall and communed with the flaming bull in his final moments on the mortal coil, I found myself with a choice in directions. I know that Kuro and presumably Lord Genichrio are in highest pinnacle of the castle. I suspect no good would come from that path. Also, what’s the point of writing a travelogue if one is going to skip to the end? Sekiro might be the opposite of Dark Souls in every way that counts, but I’m not going to give up my Soulsian tendency toward inch-by-inch exploration.

Bearing that in mind, I set myself on a quest of my own making: I decided I wanted to get to the top of a tower. 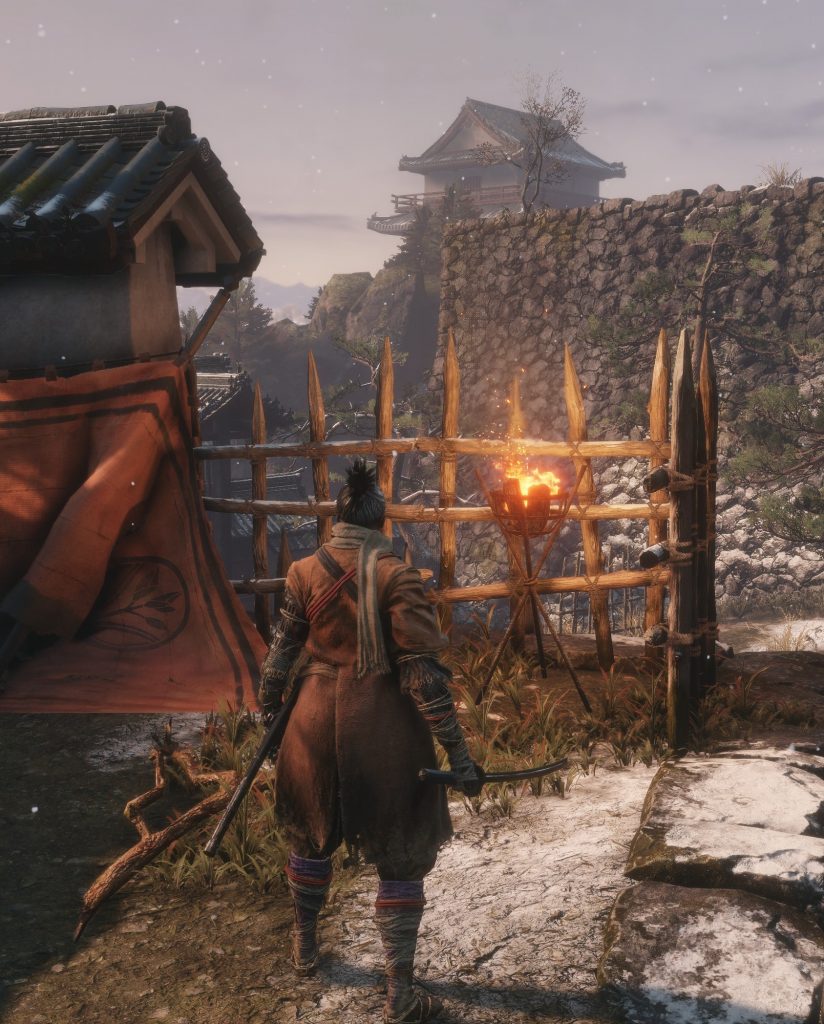 Remember that all pictures can be enlarged by clicking on them

Why that tower in particular? No idea. It seemed as good a place as any for an adventure. The trip from the Ashina Castle reservoir to that tower was mostly unremarkable, at least by Sekiro’s standards. Nothing was boring or dull, mind you. But after fighting a giant flaming bull, crossing swords against samurai, lumbering giants, and Nagate Potman’s brother, Takaya Potman, felt like standard fare. 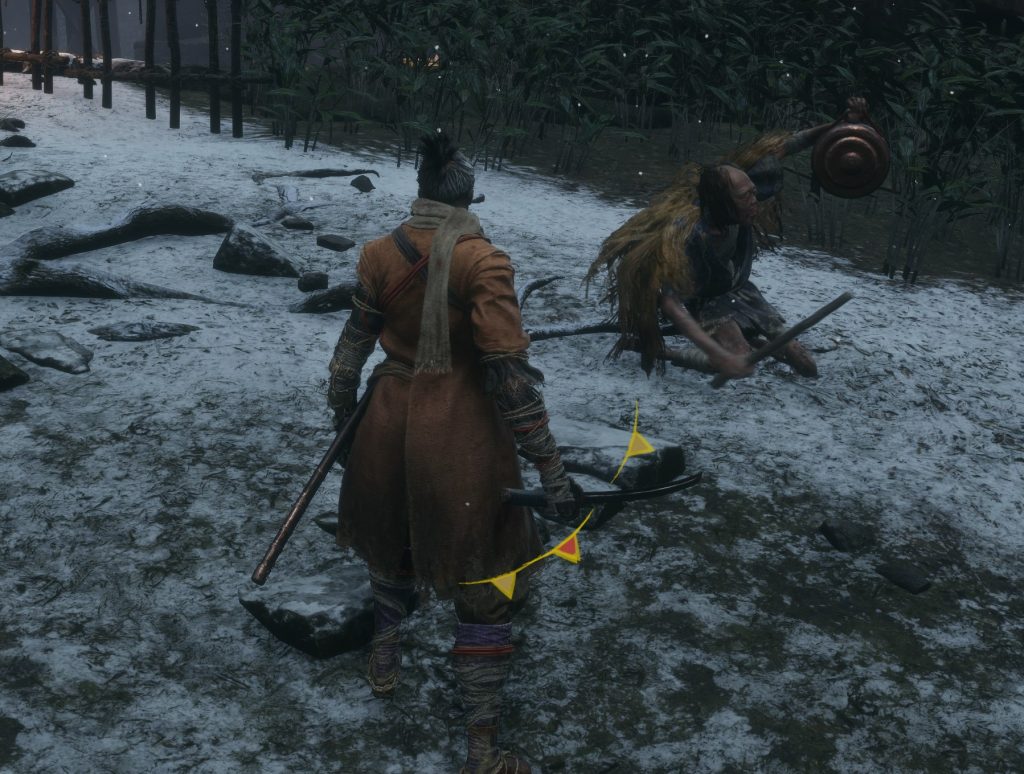 He comes from a long line of Potmans

That said, I did come across a trio of gross little gremlins wearing giant hats. On eavesdropping, I heard this particular conversation. 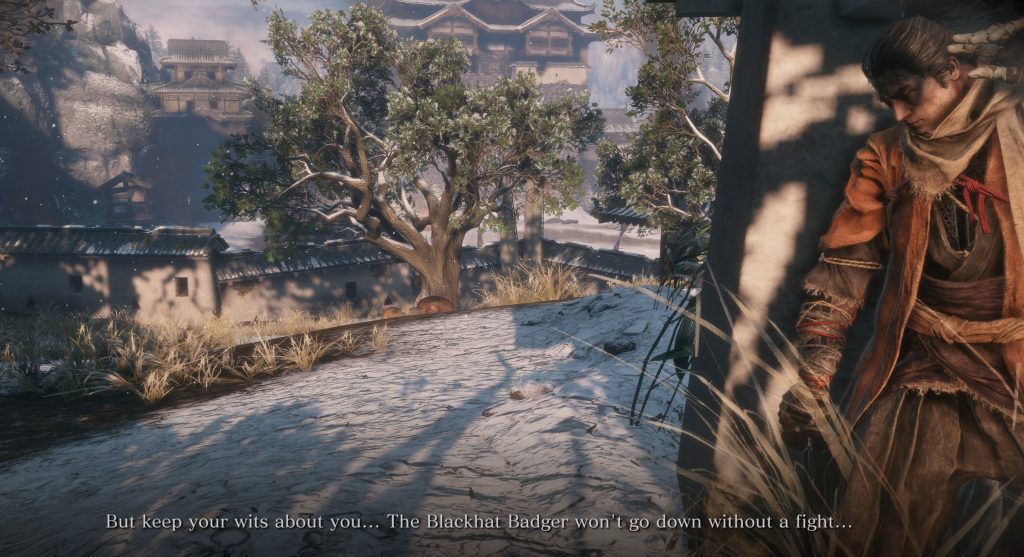 Please be an actual badger

I swear to all the gods that I will be entirely gutted if this game doesn’t present me with an oversized badger that wears a hat as a boss battle. Why does the badger wear a hat? Because the badger doesn’t give a fuck. That’s why.  Nothing will disappoint me more than the Blackhat Badger being just another samurai with an overbite and a tendency toward eating snakes.

Oh and since I’ve mentioned lumbering giants, what’s the deal with these guys? 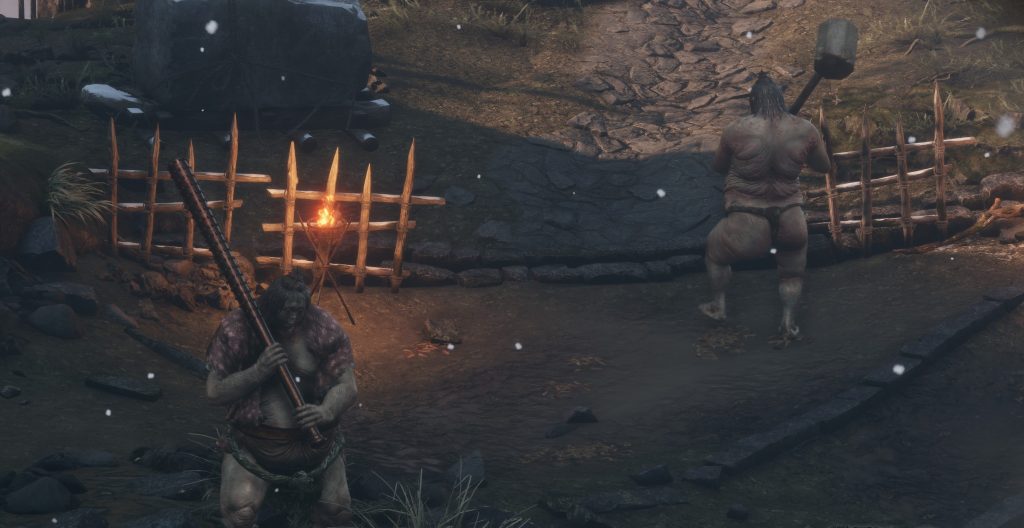 The Sekiro formula: if it is big, it must be gross

Back when I was working my way through the Ashina Outskirts I saw a giant similar to those two. He was crying and dragging a gnarly looking baseball bat behind him. The half-dozen samurai near the giant seemed entirely indifferent to the fact that this person was in emotional distress. What am I supposed to make of these giants? Are they humans, or some sort of fantasy-light take on an ogre? They don’t look like oni, based on some quick google-fu. I feel like this one of those moments where a deeper knowledge of Japanese folk lore would help me place these pathetic and violent creatures within a cultural context befitting a story where nature messes with humanity in some pretty dramatic ways. I certainly don’t see monsters when I look at these two. Their lack of trousers notwithstanding, there’s almost something child-like about them. Cleary more research is required on this point. 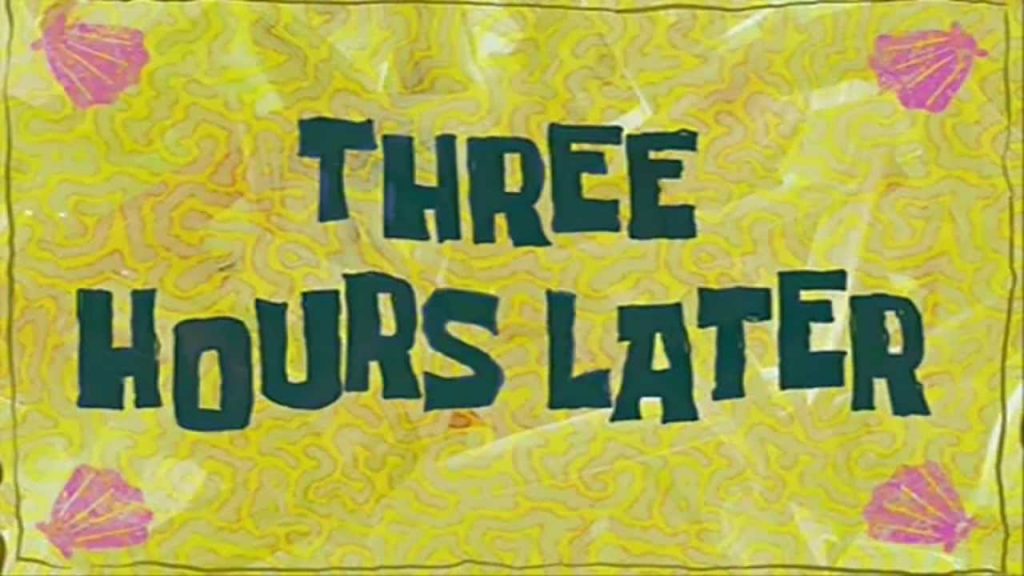 Huh, did you know that a yamako is an ape-like creature that is both cannibalistic and prone to reading minds? Damn, Japan, you are not messing around.

What was I doing again?

I caught sight of my next worthy enemy while crouching in the bushes and ambushing samurai. The game offered me two paths to him: I could charge my way up the tower’s steps and face him like an honourable warrior. Alternatively, I could sneak around the base of the cliff, working my way into the tower, itself, and then emerge behind Mr. Over-compensation and take him down a peg with stealth. 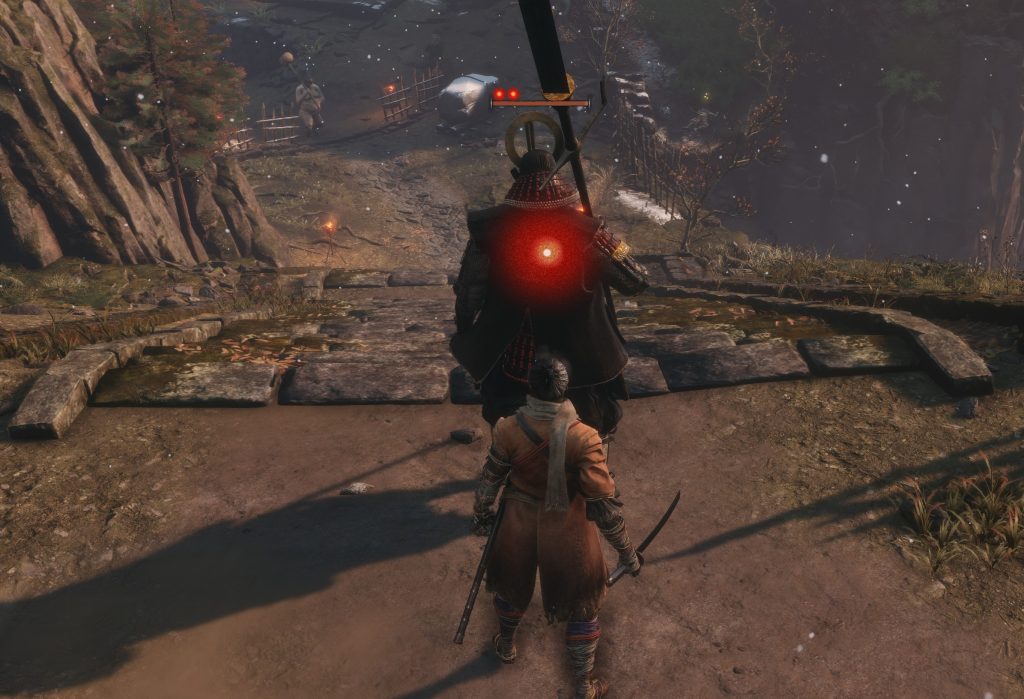 Sometimes a guy just has to get stabbed in the back.

I opted for the latter.

What? Don’t look at me that way.

The Seven Spears required two deathblows before he died, so I still had to cross steel with him. He wasn’t the easiest fight I’ve had, but ultimately he didn’t present too much of a challenge. The hours spent fighting and losing to Lady Butterfly left a mark on me. Just as she was Okami’s teacher, so too was she mine. I’m no longer afraid to stand my ground against an enemy and try to turn their blade at the last possible second. 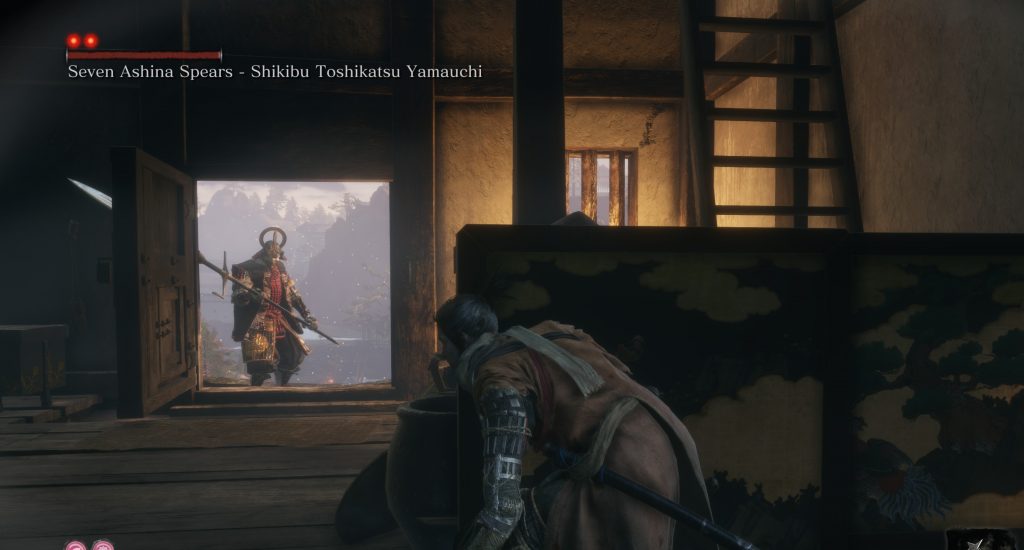 At this point I was just fucking with him.

Each cut against Shikibu Toshikatsu Yamauchi (I wonder if he is any relation to General Yamauchi from ages ago) slowed his posture recovery. Methodical surgery is all it took to bring down the Seven Ashina Spears. Deflections and Mikiri Counters broke his posture and let me land my second deathblow. Sure, he killed me a half a dozen times before I got the timing of my deflections and Mikiris down, but what’s half a dozen efforts after the double digit failures in the face of Madam Butterfly.

The interesting thing about this battle is that there’s no narrative reason for it to have happened. The tower that the Seven Ashina Spears was guarding was Lord Kuro’s old library. There was nothing inside but an imprint of Kuro’s memory and all of Kuro’s books. Why was he there? What was he guarding? Was it punishment detail assigned to him after Okami stole Kuro away at the start of the story?

Then there’s the imprint from Kuro.

I swear, if this kid dies I am going to lose my mind.