Episode 1, Angel Attack, unfolds pretty much the way I remember it: cleavage, negging, a mecha v. angel faceoff, roll credits. Notably absent is the Fly Me To the Moon refrain over the credits because, apparently, Netflix couldn’t get the rights to the music? This whole thing is for naught if Decisive Battle is missing.

Fun fact: when I was a 4th year undergrad I went out with a woman who was wayyyyy out of my league and before our second date I listened to Decisive Battle for an hour. Young Adam was strange.

I wonder what people were thinking in the 90s when they watched this first episode? Was the age difference between Shinji and Misato obvious? How did Misato’s cleavage picture, that probably says something like, “This is me, don’t you think I’m cute?” land with the audience? Knowing what I know of the show, I can all but hear Gendo telling Misato, “If you have to fuck him to make him pilot the Eva, then you fuck him. Your virtue is less important than activating Unit 01 and the salvation of humanity.”

If I cram said foreknowledge of the show into a dark corner of my brain, I can squint and see myself feeling sorry for Shinji. That, I think, is the only important piece of this episode. The flashes of him crying as an abandoned kid are a little heavy handed, but they sell the point. My question is this, if audiences follow their sympathy to Shinji, is there a reason why we shouldn’t see Gendo as the obvious enemy?

Sure, we open on a kaiju stomping its way across flooded Tokyo. An inept UN military (because the UN has a military now – up to and including a nuclear arsenal) failing to repel the angel is playing into a familiar trope: nature/the supernatural/something beyond our comprehension has turned against us. Now, we need to turn to technology to save us from said impossible force. Everything points to NERV, and its magic underground city, as the motley crew of heroes. We even have the face palming Japanese military hanging out in Tokyo-3 to serve as the classic counterpoint to NERV’s quiet competence. Never mind that Gendo is using child soldiers. Let’s also gloss over the fact that the “Marduk Institute” (insert another religious allusion) identified Shinji as the “third child”. That means there is a whole apparatus outside of NERV dedicated to weaponizing children.

Fun fact: Marduk was the Babylonian god of justice, compassion, healing, regeneration, magic and fairness. I suppose his name is invoked for ironic reasons.

“I need you now, so I sent for you,” says Gendo Ikari.

Was there ever a real reason, beyond misdirection, for us to think that Gendo isn’t the obvious antagonist of this series? The people who work for him consent to his leadership and clearly buy into his vision. I submit they could be henchmen to Gendo’s Doctor No. Maybe this series makes more sense if we see the “salvation of humanity” that Gendo is after as nothing more than one man’s selfish quest to clone his dead wife and have some sort of weird relationship with her teenage self at the expense of all existence.

Is Sachiel really out to end humanity, or have the powers that be sent him and the other angels to save us from Gendo and his grand designs? The angels don’t attack the Earth, they are attacking Tokyo 3 and the Geofront. They want NERV. Not Japan, not humanity, but NERV. Is Evangelion the story of how an abusive father recruits his son to help him destroy the world in the face of the supernatural forces that are trying to save us? There might be something to that interpretation if we look at Shinji’s transformation from bawling teen hot mess into passable warrior as a slow indoctrination. He’s not becoming a better version of himself. He’s not finding his footing and confidence amid teenage ennui and a fate greater than he can understand. Slowly, Shinji is rejecting his own morality and humanity. He is becoming the weapon Gendo needs in the face of his initial, and sensible, refusal to pilot the Eva.

Behold Gendo, destroyer of worlds. Shinji and EVA-01 are his avatars.

Five Frames to Capture the Episode – Click to Enlarge 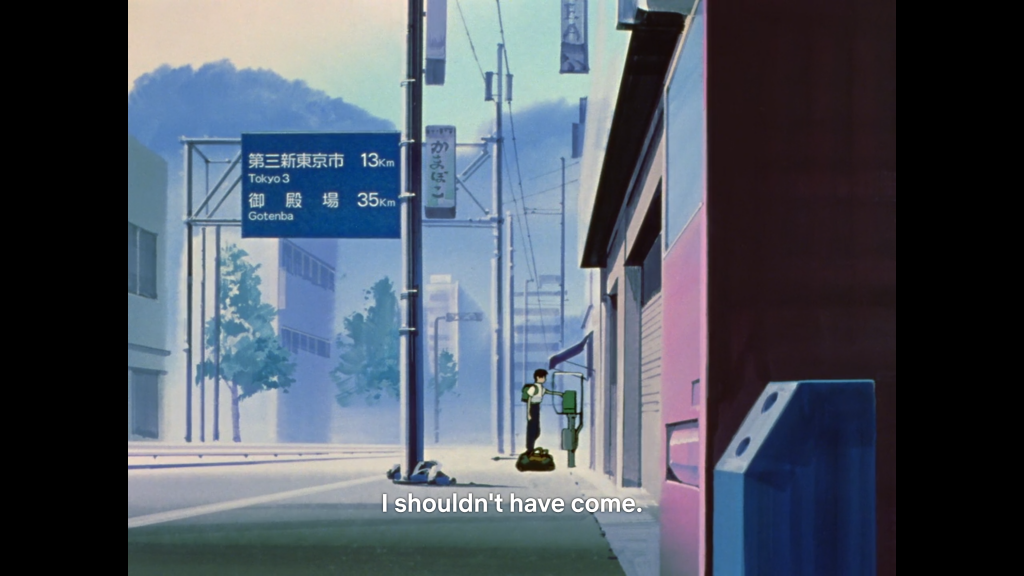 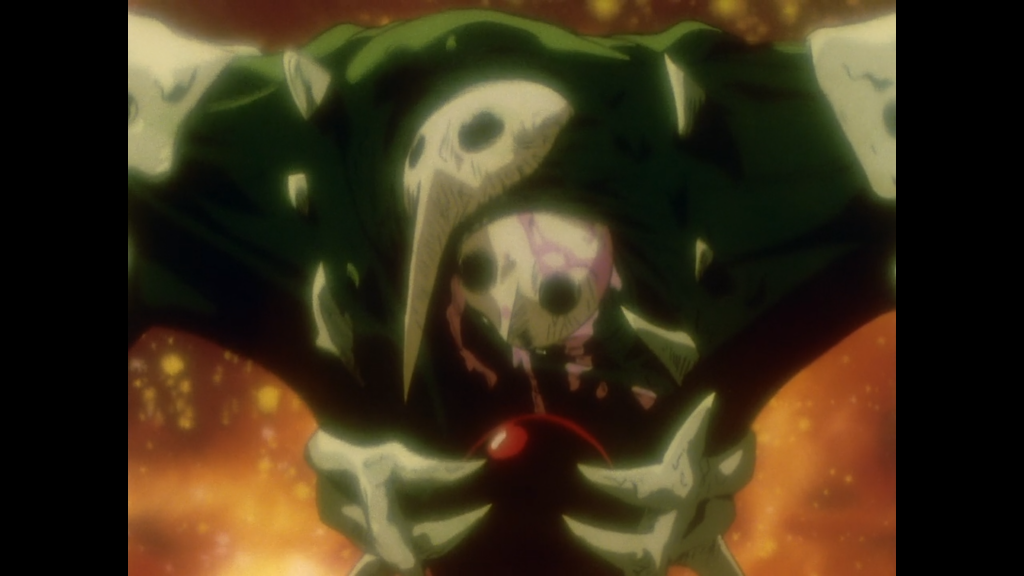 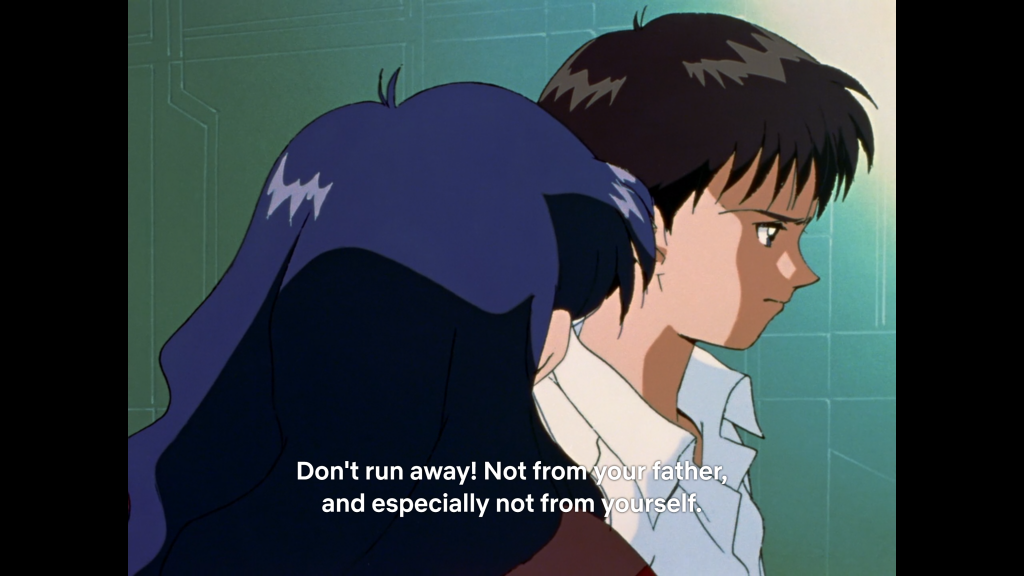 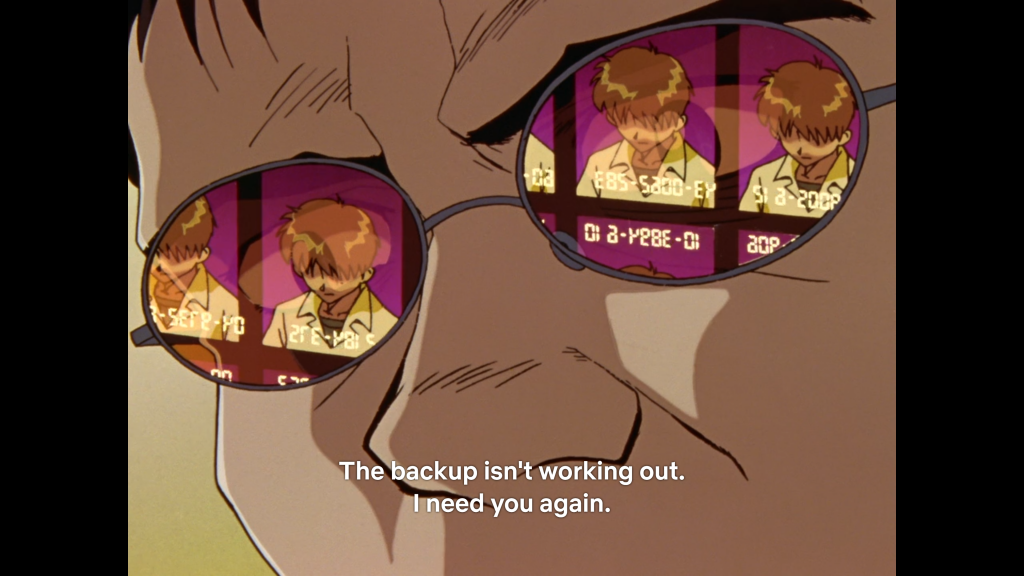 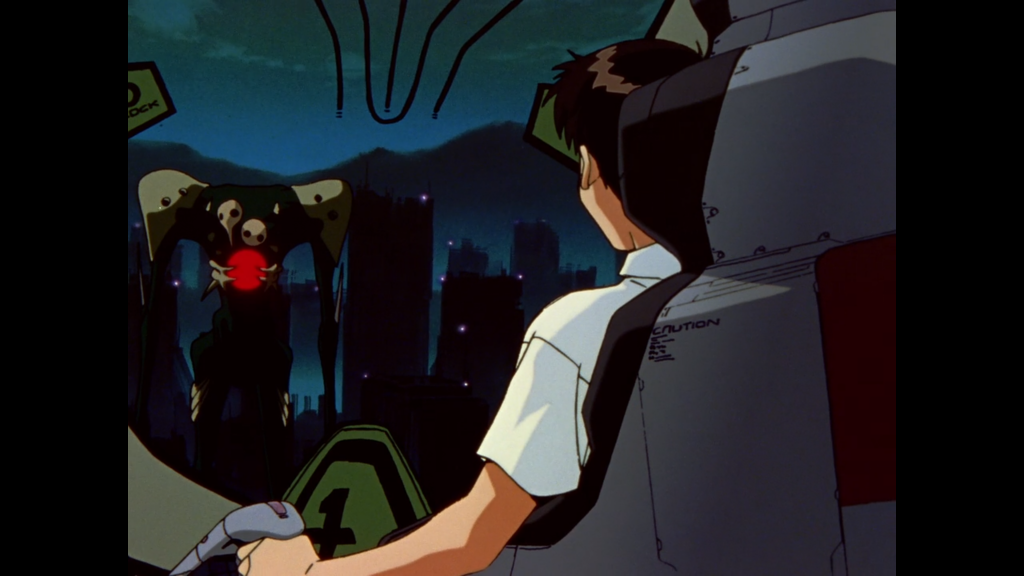