Defeating the Seven Spears and finding Kuro’s library/clubhouse proved both an adventure and something of a dead end. I could find no hidden paths or secrets beyond the tower outcropping – though the view was certainly something to take in. Rather than charging back to the gates of Ashina Castle, I decided to do a little more poking around the neighborhood. As I said back in part 10, my enduring take on Soulsborne games is that they are not about rushing. The personal journey, for both the player and the player character, is best explored through increments and reflection. Imagine my surprise that the poke around another corner led me back to Okami’s place of origin: the sewer where we find him a broken and defeated man at the start of the game.

The return to the in medias res beginning

The antecedent to Okami’s homecoming introduced me to another NPC, a wandering samurai. He claimed to have crossed Okami’s path because he was following a song. (Insert joke about THAT FRAKKING SONG IS IN THE WALLS). I saw him, and I instantly knew why he was there. It’s not to advance the plot or provide helpful insights. No, he is another person who will be made human, and then made sick as I use the dragon blood. I promise, friend, I’ll tend to your blight. I won’t let the people of Ashina suffer because of Genichrio’s ambitions and Okami’s cursed faithfulness.

The wandering samurai’s presence in the game raises another question: is there a way to protect people from Dragon Rot by never speaking to anybody? Dark Souls trained me to mash the “talk” button and mine NPCs for every precious dram of knowledge they might be able to send my way. Sekiro puts a cost on such interactions. Is there an idea buried under the mechanics? Can someone like Okami, a man sworn to the sword, only protect society through exclusion from society?

I pressed on and found myself standing inside the sewer where Sekiro began. It’s nothing more or less than a hole in the earth where Okami, like the chosen undead from Dark Souls, is called to action when he might otherwise be content to sit and wait for death. Of course, we have long since established that the difference between Okami and the Chosen Undead is that the latter sought to discover their destiny and, in turn, become part of a grander mythological cycle. Okami, a man whose immortality comes at the cost of the world around him, is summoned to attend to Lord Kuro’s destiny. Okami is the protagonist in someone else’s story.

My name is the Lone Shadow Swordsman, I’ve come to laugh at you.

The Lone Shadow Longswordman, let’s call him the LSL for reasons of authorial laziness, isn’t immediately hostile. He is, instantly, a giant fucking prick. He tells Okami how he heard of a pathetic warrior waiting to die. In the fashion of a twisted Stand by Me, he journeyed to look at the defeated man and sneer at him, presumably as an antecedent to swordplay. On the latter front, I was happy to oblige.

The fight proved harder than the Seven Spears.

Something about this particular paring that stood out. There are characters in the game that are decidedly less impressive than Okami in terms of their fighting skills. General Gyoubu, for example, was a great beast of a man, but his prowess with a blade was decidedly middling. The LSL, in comparison, felt like a mirror match. His move set was fast and devastating. No single combination of blocks or strikes seemed to phase him. What really stuck with me was the fact that he fought one handed. 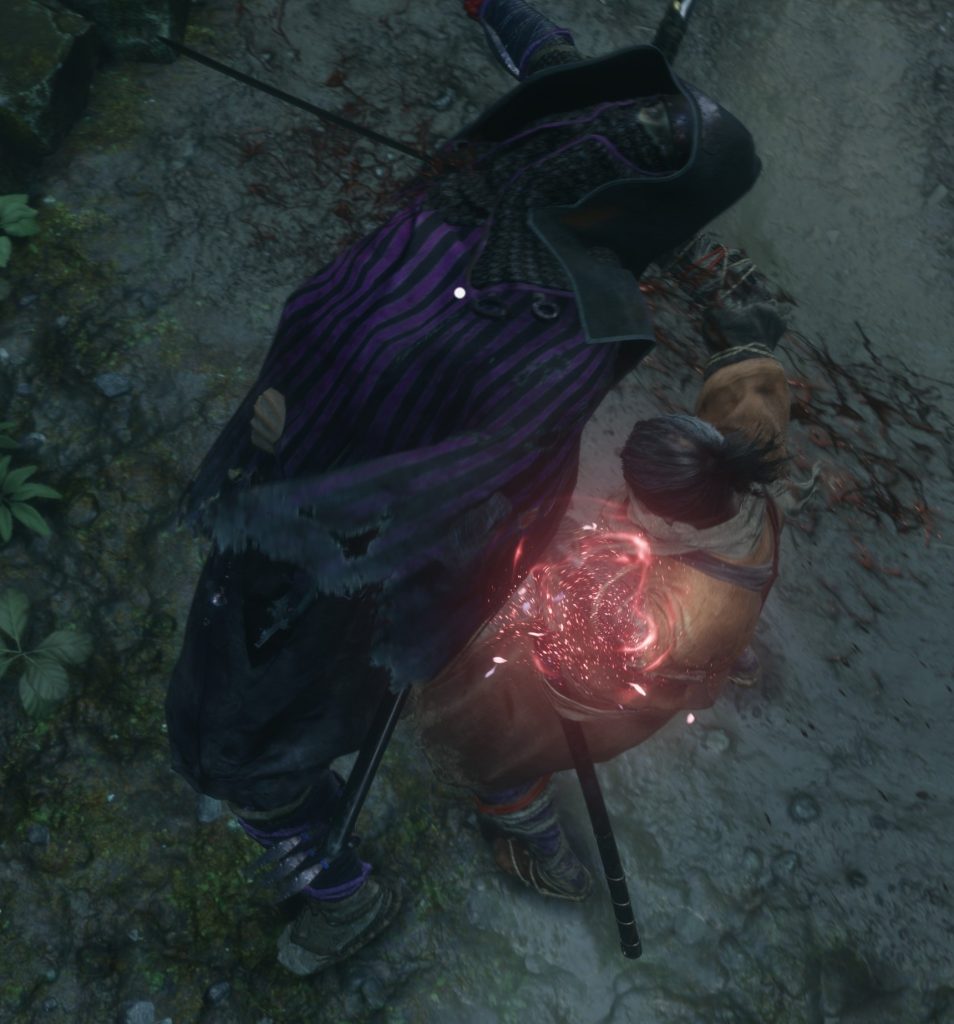 Stabbing this prick in the back proved extremely satisfying

The one-armed shinobi returns to the start of his story to meet a one-armed shadow intent on killing him. Why? There has to be something to this that I can’t quite see yet. The game has no problems playing with causality, letting me do things in Okami’s past to influence his present. Are these purple clad one-armed warriors, like that bastard from part 8, part of Okami’s future?

After that fight, I found the nearest Buddha statue amid an even darker set of dungeons and fast traveled back to the dilapidated temple.

My new hobby at Okami’s home base is getting the sculptor drunk on sake. During one of his drunken ramblings he said something about how Okami would understand better when it was his turn to start making statues. 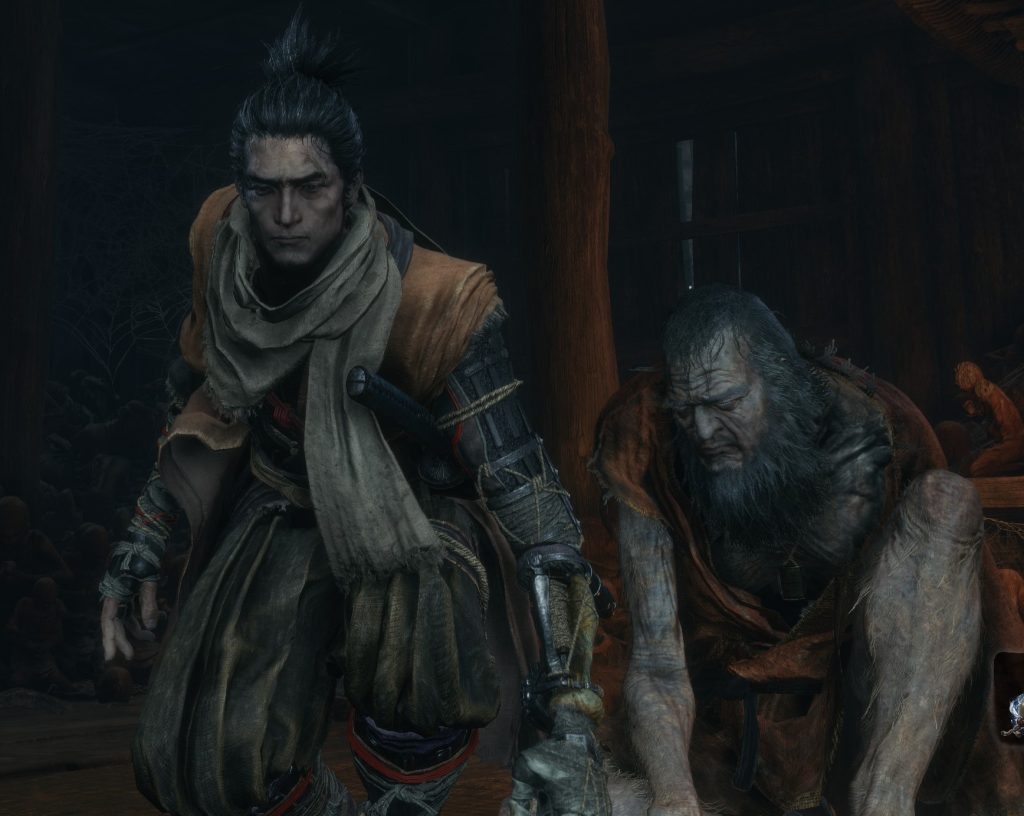 There is a more complicated relationship here than meets the eye

Does this mean Sekiro is a game about embracing one’s destiny or rejecting it? Or should I be focusing on more Matrix-inspired questions on control and the illusion of control, therein. This is about so much more than “getting gud” to win boss battles.