About a year ago I took a look at Red Hook Games’ Darkest Dungeon. Back then, it was still a work-in-progress. A couple of weeks ago the game launched its release build. And while I was generally interested to see how the final game shaped up, it was a dram or two of cynicism toward Bell’s Let’s Talk Day that finally moved Darkest Dungeon to the top of my must play list.

It’s nothing new to see a game inspired by the works of H.P. Lovecraft mobilizing mental health, in a very general sort of way, as a secondary set of health points for player characters. Anyone familiar with the Arkham Horror tabletop game, or its little brother Elder Sign, knows that one has to roll for both physical and mental health. As I said in my initial piece on Darkest Dungeon, this particular RPG is considerably more sophisticated in the way it employs psychological development as an element of a character’s overall wellbeing.

Party members in Darkest Dungeon don’t level-up in the conventional RPG sense of the word. Where something like Final Fantasy or Dragon Age treats leveling-up as a threshold for gaining powers, Darkest Dungeon uses the level-up as a measure of characters hardening themselves to the arcane horrors of the world around them. This hardness is made manifest through a general resistance to mental stress and the acquisition of personality traits, monomanias, and quirks that affect both the individual character and how they interact with the group. A particularly pious character, for example, might suffer mental stress when someone who has rejected god tells a blasphemous joke around the campfire.

To that end, there are a couple of interesting discourses at play in this game. First, there’s the notion of characters having to toughen up to the world around them. If my characters don’t harden themselves, then they are useless to me; mental strength is directly proportional to a character’s overall utility. Does any of this sound familiar to you? How often do we hear about needing to be “tougher” within the confines of an ill-informed opinion on mental health?

Lock down your feelings.

Stop hiding from things that scare you.

The other dialogue at play is one of treatment. The 18th – 19th century setting of the game parses treatment through three locations, the sanitarium, the church, or the tavern. Praying, meditating, flagellation, drinking, gambling, and whoring will lower a character’s stress. However, only a trip to the sanitarium will cure the negative (or reinforce the positive) traits a character acquires through toughening up. And here’s the kicker, removing a trait can be about five times more expensive than the short-term convenience of destressing a character. And before you ask, there is never enough money or space at the sanitarium, church, or tavern to take care of everybody equally.

Inevitably, some characters have to suffer. They go into battle stressed and anxious about what they are doing – making them that much more susceptible to losing their shit and compromising the team. As a player, I’m left choosing between sending these damaged people into the grinder, or retiring them from my quest because a cold, cruel, cost-to-utility ratio proves they aren’t worth saving.

Adam, that’s terrible. How can you think of people that way?

How can I not? Said characters become both a short- and long-term risk to the greater whole. In the short-run, their mental volatility could get the party killed; over the long-run, paying for their treatment might bankrupt my entire campaign. How do I choose to cure a character of their necrophobia when doing so means my next expedition might not have enough money for food? Thus, as the characters harden themselves, so too must the player concede to the calculus of a war against the supernatural. It’s a struggle most people aren’t fit to fight.

I will, after I show why this actually means something.

Thing 1: Darkest Dungeon is pretty much a perfect metaphor for how we approach mental health issues. The things that manage a person’s stress (e.g. drink, drugs, religion, fucking, et c.) are infinitely cheaper and more accessible than what a person needs to heal (e.g. medical intervention).

Need to see a therapist? Don’t have insurance? Well the state – at least in Ontario – isn’t sure that you, as a person, have enough utility to merit access to the scant services available on the public dollar. Probably best to pay out of pocket and hope that your personal resources don’t run dry. Alternatively, why not buy a pack of cigarettes or down a few pints, because those are so much cheaper than an hour with a headshrinker or filling that prescription for lithium.

Thing 2: Does this count as empathy gaming?

I’m the first to admit I don’t know a lot about empathy gaming. Is it about changing interactive stories to be less of a power fantasy? Is it an analogue for video games entering an impressionist movement? The likes of Dear Esther or The Beginner’s Guide seems to suggest the latter.

Darkest Dungeon’s first screen tells players that it is a game about making hard decisions. Characters will die and stay dead; battles will be lost. I’m playing the empathy card because the game is smart enough to let me get to the cost of those losses on my own. The essential horror of the game is as much a product of betentacled Cthonic fiends as it is the implications of an unmentioned but still pronounced monstrous utilitarianism. Even if Darkest Dungeon doesn’t unfurl the jeune école’s banner of socially conscious gaming (or GTFO), it certainly seems to have compassion and empathy written into its DNA.

Lovecraft, as we all should know, was a colossal racist and an asshole. His legacy is equally imaginative but tainted by his worldview. On the former point, (fuck the later point) his writings tell us we are alone against the desert of the Real. Something has always bothered me about the isolation at the core of Lovecraft’s protagonists – racial issues notwithstanding: they discount compassion and humanity as virtues to cultivate against the darkness.

Darkest Dungeon’s developers tease out the importance of humanity through the simplest of things. There is a character class in the game called the houndmaster. This character does his fighting with a canine partner. When he uses his “lick wounds” ability to heal, the animation is the houndmaster hugging his dog. During longer forays, the houndmaster’s dog pulls double duty as a therapy animal. Around the campfire he is capable of reducing the party’s stress level. I submit this genuine warmth and compassion is our defence against the abyss. In a game where healing and self-care are often underwritten by self-destruction, a man hugging his dog stands out far too much to be an accident.

However we might want to classify Darkest Dungeon, it’s pretty clear that the game wants its audience to cultivate a certain understanding of mental health as a struggle against short-term stress, and the long-term behaviors that incubate out of a life under constant and unyielding pressure. It wants players to have compassion for people who are suffering and, subsequently, think very carefully about the monstrous act of measuring people by their utility. When the game makes players choose between healing and utility, it never lets them forget the weight of those choices. All of this without preaching to the audience.

It saves preaching for the likes of yours truly. 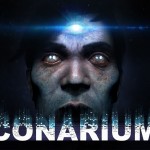 Conarium: A Place of Wonder and Terror