What the hell am I supposed to do with this episode? On the one hand, it offers layers and nuance that reward multiple viewings of the entire series. But then there is literally everything else that goes on in this episode, and I am loathed to spend a thousand words unpacking how the Shinji-Toji-Aida triumvirate’s voyeurism is essential to the psychology of the series. Fan service: it says more about you, Hideki Anno, than it does about your audience.

[Retrospective Note: Present Adam is much more annoyed about this than past Adam, so let me dig into the frustration just a little bit more. Yes, we were all teenagers. Yes, we all did stupid shit when we were teenagers. Evangelion presents that stupid shit without the slightest effort at meaningful self-reflection/correction. Whimsical takes at characters being creepy means that you, Hideki Anno, reveled in teenage boorishness; nay, you, Hideki Anno normalized it while the rest of us have the decency to shake our heads at our past selves.]

If we put a bracket around the bullshit, the episode is built around an exploration of self-sacrifice. Flashbacks to Gendo burning his hands as he attempted to free Rei from a malfunctioning Eva-00 combined with Ritsuko’s painstaking explanation of the same to Shinji, make it clear that Gendo cares more about Rei than he does his own son. The truth of this profoundly creepy relationship is teased amid more crucifix imagery forged from the debris of Eva-00’s failed test. Much later in the series we will learn that Rei is the clone of Gendo’s dead wife; she is a literal resurrection. Knowing this detail places any cross in Rei’s proximity, as well as Gendo’s act of self-sacrifice, in a clear context. The caveat on this point is that the symbolism means nothing to a first-time viewer. 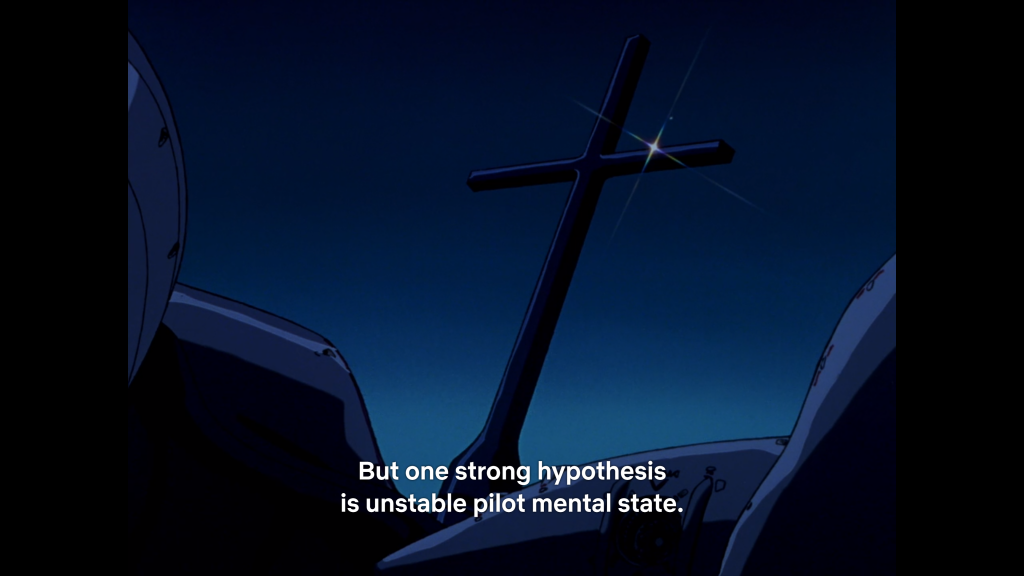 Shinji then witnesses an exuberant exchange between Rei and Gendo from the cockpit of his Eva. There’s no dialogue beyond the routine radio chatter of Shinji’s tech support team. This particular scene plays out in body posture, smiles, and an overt sense of warmth between the elder Ikari and the “First Child”. Without knowledge of the revelations to come, there’s a sense that this might be a well-adjusted, perhaps even healthy, relationship between Gendo and Rei. And while Shinji doesn’t come out and say it, he is very clearly asking himself why Gendo isn’t capable of showing him that sort of affection. I suspect the audience is meant to see this as an adjustment to the conditioning that keeps Shinji a willing accomplice to Gendo’s plans. If Shinji sees that his father is capable of warmth and compassion, will it keep him working for Gendo’s approval?

I would be reasonably satisfied with this episode if it seemed as concerned with exploring this question as I am. Instead, it takes a weird detour into uncomfortable territory that is trying to play Shinji off as being maladroit amid behavior that rapidly accelerates into the orbit of stalking.

This sequence shows Shinji’s class divided by gender, with the women swimming and the lads running track. The topic of conversation among the boys largely focuses on Toji and Aida leering at Rei and offering up editorial on her body. Shinji’s awkwardness amid the situation is hardly a condemnation of his “friends” actions – though demanding contemporary sensibilities is probably expecting too much from both Shinji Ikari and Hideki Anno. Despite that, the natural counterpoint to Shinji’s discomfort at being “one of the boys” should be the desire for a more meaningful relationship with Rei as a fellow Eva pilot. What the episode offers takes a dark fucking turn from anything that might resemble camaraderie.

While having dinner with Shinji and Misato, Ritsuko tasks Shinji with delivering a new security card to Rei’s apartment. When the doorbell to Rei’s apartment doesn’t work, Shinji takes it upon himself to barge into her home. Once he’s through the door, he decides it is a perfectly normal thing to start going through her stuff. And then, when Rei comes out of the shower, because in anime nobody can hear that anyone is in the shower, Shinji bumbles into falling on top of naked Rei. Apparently, violent gravitational shifts are a thing in Tokyo-3, as that is the only damn explanation for this scene. As a coup de grace, one that should be readily expected if someone has been paying any attention at all to this series, Shinji breaks his fall by grabbing a handful of teenage titty.

[Retrospective note: does my use of teenage titty make you uncomfortable? Good. It should. I originally wrote something tamer. Then, I realized that I wanted you, gentle reader, to feel a little of what I felt when I watched that scene.

I also want you to remember the feeling of how my words made your skin crawl, ever so slightly, the next time some Evangelion fan starts banging on about how the series is the highest of art.

Sometimes art challenges us to move outside our comfort zone, and sometimes teenage titty grabbing tries to pass itself off as art.]

Why in the name of all the gods did Shinji not slide the card under the door and be on with his day? That is literally what any sensible person would do in Shinji’s scenario. Alternatively, a reasonable person might bang on the door a few times and then wait around a minute or two. A reasonable person might assume that Rei is on the phone, on the toilet, or otherwise engaged in the things one does about their home.

Was the writing so desperate to show us the inside of Rei’s horror show apartment that it had to sacrifice Shinji on the altar of sex pestery? Was there no better way to show the bloody bandages, dirty dishes, muck-caked floors, and assembled pharmacopeia that prove Rei’s recovery from her episode one injuries left her more alone and vulnerable than Shinji waking up in the hospital?

Make no mistake, the audience needs to see that Rei’s life is physical pain in service of Gendo Ikari. In that moment she becomes an instant counterpoint to Shinji’s emotional pain in service of the same. Shinji accidentally falling into a sex pose on top of Rei’s naked body hijacks any value the scene might otherwise house. And I’m not even going to touch the utterly grotesque tight shot on Shinji rubbing his fingers together having just copped his first feel. I will, however, show you a picture because if I have to live with it, so do you. 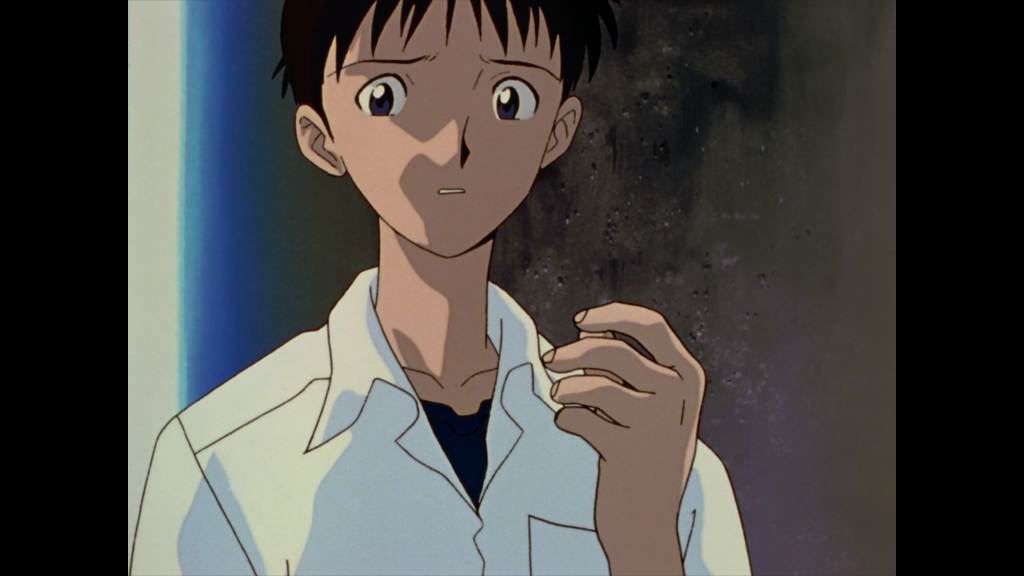 I mark this as the point where Evangelion starts to lose its audience. Regardless of if a person sees Gendo or the Angels as the series’ big bad, the writing has been positioning Shinji as an object of the audience’s sympathy. While we might be inclined to see our protagonists as flawed people once they’ve established some rapport and credibility with the audience, it’s too damn soon to accept casual home invasion and groping as character depth. The writing wants us to see inside Rei’s life, but it gets us there in a way that is chillingly uncomfortable and undermines any of the meaningful subtext it is trying to deliver. Worse yet, Rei’s only overt reaction to Shinji’s actions comes when he dares to question Gendo’s wisdom. In that moment and for that crime, Rei goes upside Shinji’s head without any hesitation.

Recall when I mentioned how the camera invited the audience to consider that Gendo and Rei’s relationship might be healthy and well adjusted? That slap establishes, even without foreknowledge of cloning, that the dynamic between Rei and Gendo is dependent and abusive. Rei won’t abide Shinji questioning Gendo, because such an action brings the necessity of her own suffering into doubt.

Thus do I return to the question at hand: what the hell do I do with this episode? Is Rei so inured to pain and humiliation, so perfect in her Christ-like willingness to sacrifice herself to anyone named Ikari that Shinji’s borderline assault can pass without mention? I’m not sure that Hideki Anno cares. If the story really wanted me to go about a deep reading, it might find other things to do beyond blowing up the relatability of its protagonist and filling the time with tangents that see Shinji and his classmates leering at girls to language like “They’ve all got such great knockers.”

That was the subtitle Netflix offered. The English-language track had one of Shinji’s classmates saying, “Get a load of those bazoongas.” 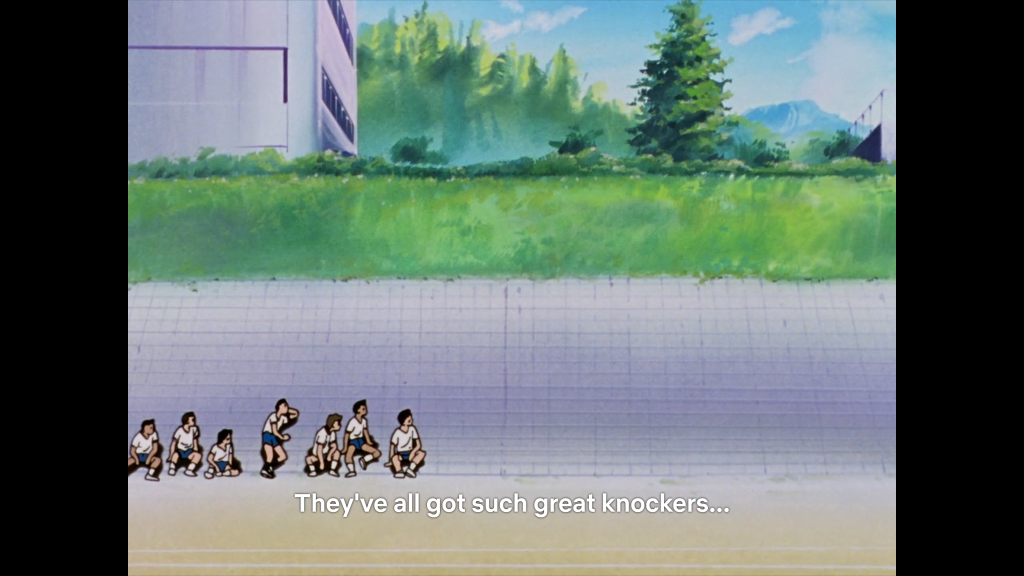 Remember, Evangelion is a very smart and revolutionary series.

If I had any sense at all, I would have recognized this episode for the red flag that it is, and started preparing my forces for a tactical withdrawal from this battlefield. Alas, I am stubborn. I tilt when I should withdraw. It’s not knightly so much as it is not wanting to throw in the towel on another long form project.

There are brilliant moments to Evangelion. I won’t deny that. However, those moments of brilliance always seem to be underwritten by trash and a long queue of fans ready to explain why the odour wafting off said garbage actually smells of roses.

From my vantage, this episode stands as the first of many examples that demonstrate how Evangelion gets in its own way. There is a meaningful subtext to this episode. Shinji seeing Rei as an abused person, someone whose love for Gendo has led to measurable suffering, should be a moment of character growth for Shinji. It should also serve as a moment to raise the stakes on the story; therein, Shinji should be wondering if he is on the right side of things. Instead, any potential for growth is lost amid groping and the literal male gaze.

And before someone gets on my back about how teenagers are stupid and Evangelion is as much about teenage alienation as it is anything else, let me spare you some effort: I don’t care. I was a teenager. I know they are stupid. Likewise, you were a teenager, and I don’t think your mileage varies that much from mine. Is a monument to teenage stupidity, featuring teenage home invasions and groping, really the critical hill on which people want to die?]