There’s a certain statement that comes with being a North American white dude that is learning Japanese. Having Latin, Italian, and French within my linguistic toolbox raises no real questions about the quality of my character. I mean, there are a few questions about the Latin, but I can hand wave those away with a funny anecdote, or two, from Caesar’s De Bello Gallico. When that fails, I can take the piss out of myself through the simple observation that I spent more time in university studying a dead language than Canada’s second official language.

When I tell someone that I have taken to studying Japanese, I open the door to all manner of bizarre inquisition and judgmental stares. Did I read too much James Clavell or other such well-crafted but also a little Eastern fetishist authors as a child? Am I still working through teenage alienation issues? Perhaps yours truly is little more than another maladjusted-otaku-wannabe-weeb, who was…what was it…ah yes, probably building a katana collection and sleeping with an anime body pillow. (Come now, did you think a burn like that wouldn’t get back to me?)

Regardless, what I say next, I say not to edify myself but to illustrate one of the challenges of engaging in a critical discourse when the subject matter at hand comes through a translator: I think Netflix is getting things wrong.

For example, Aida refers to Shinji as “Ikari kun,” but the subtitle calls him “Mr. Ikari.” Even before I cracked my first Japanese textbook, I knew that kun was a diminutive. It is an affectation shared in good spirit between equals, or a formalized recognition of hierarchy from someone older to someone younger. The only way we get to “Mr. Ikari” is if Aida addresses him as “Ikari san,” which would probably be fitting since Shinji is solidly the old man of the Aida-Toji-Shinji triad.

There’s another example of a mistranslation at the end of the episode. Aida and Toji are seeing Shinji off at the train station. Some distance away from the duo, Misato parks her car and gets out just in time to see a train pulling away. Aida says, at least to my ear, あれ, which by my understanding means “That thing/person in the distance”. The subtitles translate it as “Look!” That seems off, but I’ll fully admit to my own inexperience. Perhaps あれ is a vocative or imperative of “to look” that I haven’t learnt.

[retrospective note: nope, it’s not. The imperative of みる (to look) is みろ and that sounds nothing at all like あれ. High fives past-self through the space time continuum.]

I’m not dwelling on these examples to dunk on Netflix’s translator, who probably knows much more にほんご than I do. My point is that precision in translation seems like a very important thing amid a series that is built on religious allusions and deeply layered metaphors. If a neophyte with sixty days of training at the time of these words composition has grounds to question the translation, what would someone fluent hear? Even at this point, well before Kaworu’s much maligned mistranslation, the difference of a word or two could have a night and day (second) impact – see what I did there? – on how I read this episode’s emotional beats.

[retrospective note: I think a lot of what I’m about to say next in terms of Aida and Toji being part of Gendo’s master plan is eventually proven wrong. It made sense when I watched this episode, but looking back, I think I’m offering the narrative too much credit. I thought it was playing Quantum Chess, when what’s on offer is Rock, Paper, Scissors, Lizard, Spock. Gendo would never be bothered to get this far into the weeds on things.

The narrative flow is simply that Shinji has gone from feeling bad ass to feeling bad. Friends provide him with external validation, which, in turn, makes him get back in the robot. Thank you for coming to my TED Talk.]

Accurately interpreting emotions is an essential experience because this episode shows Shinji driven by a need for affection and approval. If high school was a crucible in the previous episode, something that isolated Shinji and made him dependent on NERV for validation, this episode shows the other function of the high school in weaponizing Shinji. Therein, high school creates a sense of community among people who would otherwise would never be brought together. In other words, Aida and Toji can then be seen as two more pieces on Gendo’s playing board.

When Aida offers the slightest bit of human compassion to Shinji, he begins to rethink his plan to run away from NERV and go back to his old life. Toji showing up at the train station to make things right following his actions in the last episode all but cements Shinji’s decision to get back into the robot. Misato’s last minute arrival, particularly after giving Shinji back-to-back bollockings, is little more than icing on the cake of emotional manipulation.

At the same time, Shinji only accepts Aida and Toji’s support with the caveat of announcing to them that he isn’t really worthy of their showing up. Shinji says that he is dishonest, a coward, a sneak, and a weakling. He says that he’s the one who deserves a beating – not Toji, who insisted that Shinji punch him so that the two of them could bury the hatchet. This last-minute confession is in stark contrast to the last gleaming of cocky maverick Shinji we see in the episode’s front end.

During the cutback to Shinji’s debriefing after the battle with Shamshel, Misato drives home the point that Shinji’s charge into battle was reckless and disobedient. Shinji shrugs off the criticism with a series of hai (Japanese for yes) culminating in a statement that he’s the only one who can pilot Eva-01, so he will pilot it. Shinji also mentions that he could never put the burden of piloting 01 on Rei, who really hasn’t said or done much this series other than be seen in various states of undress (because anime) or in facial bandages. So what the hell is actually happening here?

Shinji’s indifference bordering on smugness certainly undermines the subtext the episode seems to be after. Consider that during Shinji’s flight from NERV, he seemingly strolls through a Van Gogh painting. Impressionist sunflowers in the fashion of an artist who was never appreciated in his time is a fairly clear way of telling the audience that they are dealing with a tormented character.

[retrospective note: a compelling sequence but also not news for us at this point.]

Is the deeper idea that so long as Rei exists as someone who is obviously the most hurt person in the room, Shinji’s is never going to feel like there is space for him to feel bad about things? If so, perhaps Shinji can only show any of his vulnerability when he is completely removed from NERV. Such a state of affairs would line up with Shinji’s confession of self-loathing to Aida and Toji. I would also observe the number of paragraphs it took us to get here, and note this is neither a particularly clear narrative direction nor is it a particularly accessible subtext.

And before we let ourselves be tempted toward applauding Shinji’s courage at being seen, recognize that his actions proved that he is absolutely capable of looking at a wounded Rei and walking away from NERV. Shinji is also able to spend a night camping with Aida, and in the process begin to form a friendship with an age-appropriate human, yet this doesn’t stop him from deciding that keeping said friend alive should be someone else’s responsibility. 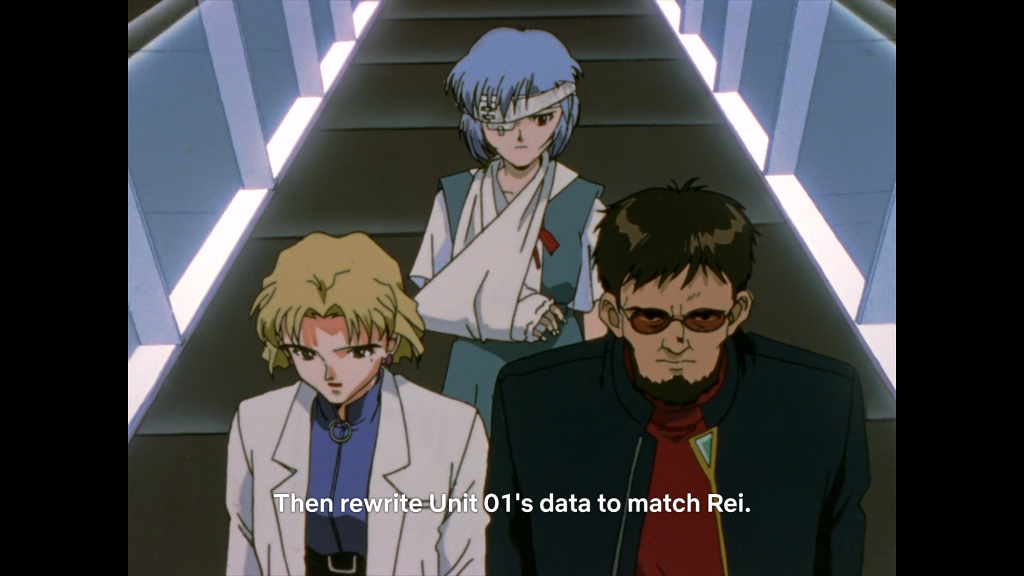 Overtly, being seen as a peer by Aida and Toji may have kept Shinji from getting on the train and leaving NERV behind. Concurrent to that decision the writing confirms everything that Shinji says about himself in his confession. For all his bluster, he is a scared shit weasel that would let a wounded Rei fight in his place. Thus do we see shame and guilt as potential motivators for keeping Shinji in Tokyo-3.

The episode leaves me to contemplate the moment when Shinji looks across the platform to see Misato and says ただいま (I’m home). Is Shinji finally feeling an ounce of the acceptance he has craved since his mother’s death? Or is the audience meant to see Shinji telling himself a lie to make his self-evident truth, that he is a coward who would leave Tokyo-3 to its own devices, a little easier to live with?

On a related note, I honestly don’t remember if the drawn out periods of musical silence amid dramatic friezes were always there, or if this is the result of Netflix not getting the series’ music rights. Either way, they are having the impact of making certain scenes a little more emotionally resonant. The solitude of a character who is afraid of being alone with his thoughts, hence the endless headphones, feels more poignant amid external silences and the sonic ephemera of riding a train.

The deeper I got into this show, the more frequently I thought about shelving this entire project. Taking notes on an episode, let alone writing it up, left me feeling emotionally drained. At first, I thought this was the general sort of malaise that comes with any long project. I was about two-thirds of the way through when I came to the realization that Evangelion is exhausting because engaging with it requires an approach to analysis that is much more like playing amateur psychotherapist than art critic.

As the product of a creator who is very forthright about writing their depression and alienation into the series, Evangelion drags the critical audience into a miasma of primal emotions and anime-impressionism. Understanding the story requires getting deep into the mind of an imaginary character whose self-loathing rivals that of the most manic stand-up comedian. At episode four, I had the energy to dig into that quagmire. Once I was into the teens, I found myself out of gas. These characters, and their creator, take so much from the audience and offer nothing in return. They are parasites, feeding on calls for pathos until all that remains is exhausted bitterness. It is the feeling that explodes in a volcano of truth and regret when that one friend who refuses to get any actual help talks about moving to LA for the ten thousandth time.

This is why the tone of this installment is very different from what you will see later, gentle reader.]