Before we begin, a moment of gratitude for an entirely straightforward episode of Evangelion. The Showdown in Tokyo-3 is light on emotional manipulation, offering just enough of a nudge to get Shinji back in Eva-01’s pilot seat for a technobabble battle with Ramiel, the fifth Angel. These events pivot to a place where we can see Shinji as a generally amiable sort of character, and not a sex pest in the making. At the same time, the episode’s focus the practicalities of a battle between mech and monster presents as Evangelion with the least to say to its audience on matters metaphisycal and emotional. Despite this, it still manages to up-end a few expectations inherent to the subgenre.

[Retrospective note: I think I’m happier when Evangelion has less to say, since so much of its dialogue with the audience comes in the form of erratic shouting.

HUMANITY HAS MADE NEW GODS TO USHER IN A PARADISE OF OUR OWN MAKING.

WHO HAS TWO THUMBS AND ISSUES WITH THEIR FATHER AND CHRISTIANITY?

I LOVE EVERY WOMAN THAT I SEE, BUT I ALSO HATE EVERYONE IN MY LIFE.

I see absolutely no problem with Evangelion taking a step back from foisted philosophical subtext amid endless mystical ephemera. Evangelion might be trying to subvert anime tropes (i.e. children have special connections to mecha that allow them to be more capable than adults) but robots versus monsters is what got people in the door. It’s about time we give the people a little of what they want.

What? Don’t look at me that way. Sometimes I want to see a big robot beat the hell out of a kaiju. And if this episode does anything, it is to prove that Evangelion is more than capable of iterating on anime tropes without completely alienating the audience.

Consider that the battle with Ramiel is not what one might call a conventional anime set piece. Various Gundam series wax dramatic about dropping space colonies on planets, but do they ever stop to talk about the amount of delta-v required to send a self-contained habitat careening toward the Earth? This particular episode of Evangelion bucks the trend of asking the audience to roll with so many mecha suppositions. Instead, it spends the lion’s share of its airtime engaging with the logistics of battle rather than the battle itself.

The decisive battle between Eva-00, Eva-01, and Ramiel lasts all of 2 minutes. And if there is a hero in the episode, it has to be Misato for her ability to get disparate groups of engineers to hit a deadline on what becomes a massive public works project in support of defeating the Angel. Shinji might have pulled the trigger to kill Ramiel, but Misato, a consummate middle manager, hijacked 180GW of power from across all of Japan and focused it into a single point. If I may invoke the common parlance: sex is great, but have ever had all your work teams hold to the critical path and meet project deadline?

The fixation on logistics and operations as the paramount consideration to defeating Ramiel allows for very little interplay between Shinji and Rei. This is fine considering where those interactions went in the last episode. The Eva pilots’ most meaningful scene occurs after Shinji wakes from a medically induced coma following a first disastrous battle with Ramiel. Rei, who now gets an eyeful of naked Shinji – because making someone naked is the only way Hideki Anno knows to express vulnerability in a visual medium – informs Shinji that they are both expected to participate in a second sortie against the Angel. Shinji is at a loss to understand how anyone can expect him to go another round. With the weathered world-weariness of a combat veteran, Shinji opines that nobody who had gone through what he endured would ask someone else to do it. 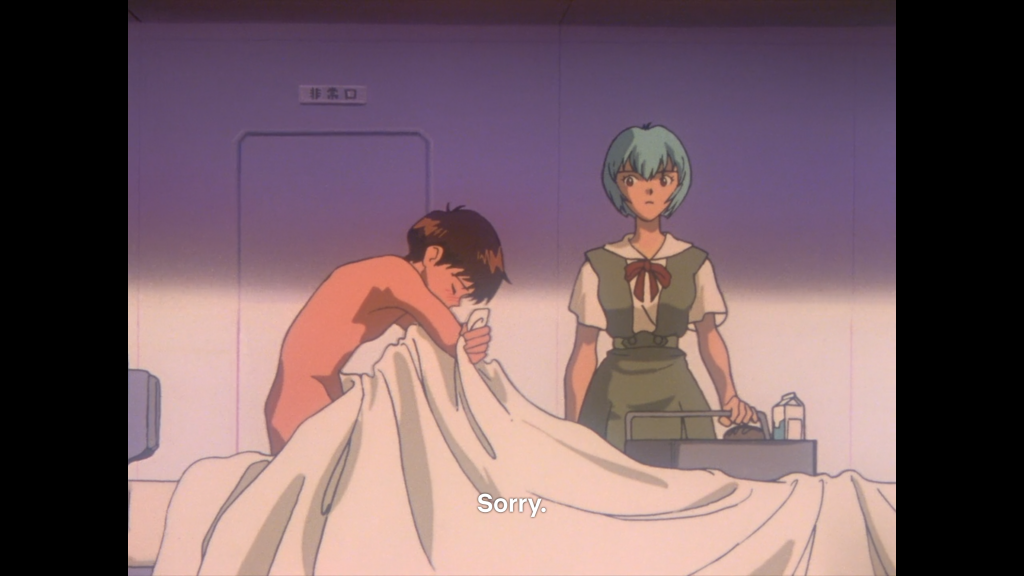 Once again, I find myself wondering about the world building that went through Hideki Anno’s mind when he was writing this episode. Was Rei the only person that could be spared to bring Shinji a bedside meal and tactical briefing? Or did Gendo and Ritsuko send Rei to Shinji knowing that her tendency toward self-sacrifice – her belief that her only connection to humanity and thus her value as a person comes through piloting the Eva – will engage Shinji’s compassion and force him back into the pilot’s seat? The question lingers within the margins of the episode, but it doesn’t get in the way of the story moving forward.

I’m also brought back to the idea of Gendo as the series’ antagonist and the Angels as an unknowable force trying to save humanity from its own excesses. Ramiel, the fifth angel, is not a typical kaiju. Where Sachiel and Shamshel both had the appearance of otherworldly monsters, Ramiel is a double sided pyramid. Its attacks are limited to threats against it, and its goal is to drill into NERV headquarters.I don’t know why I never saw this singular focus from the Angels as atypical when I first watched Evangelion. Perhaps a childhood nourished by the Zentradi attempting to capture the SDF-1 created a blind spot where alien obsessions are concerned.

Three battles into the series and it’s clear that the Angels have no interested in the civilians or the structures of Tokyo-3, save for when they are collateral damage in retaliation to attacks from NERV/the UN. The Evas, themselves, cause more property damage given their tendency to rampage under Shinji’s and Rei’s imperfect control. The only thing the Angels want is NERV HQ. Specifically, the crucified lady alien/Angel that is housed within NERV’s bowels. Also something about the geofront being an egg?

With this in mind, I find myself giggling at the overt phallic imagery of Ramiel’s purple exetendo-drill burrowing under the city such that Misato can ask this question. 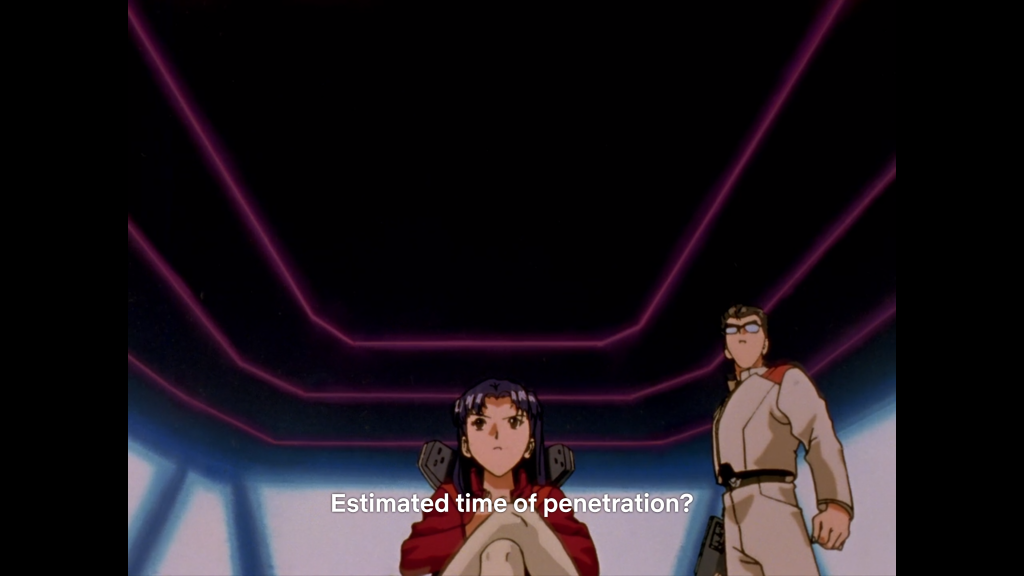 [A note from a version of me who has finished watching the entirety of the series, for a third and final time, and is now free to connect the dots that past-Adam could not quite see: I’m not sure that present-Adam has much more to say about this episode. Showing the logistics of a giant robot battle, really spelling out the impossibility of this kind of technology, is unexpected and happily subverts anime norms. Would that the entire series brought this energy to the table.

It’s almost as if there are two Evangelions. The first Evangelion is like this. It’s a good science fiction series with more going on under the hood than it is letting on. It gives serious thought to the world in which it lives and the limitations of modern technology scaled up to ludicrous purposes. The characters are flawed, but the writing is letting the flaws speak for themselves rather than using character flaws as a stand-ins for narrative conflict. We will see this again in episode 10, but I struggle to think of another episode that hits quite this same tone. I like this Evangelion, and I’d be willing to give the entire series a lot more latitude if it tried to bring the audience along in this fashion.

Then there’s the other Evangelion. That Evangelion is an impressionist hot mess of raw nerves, weird dialogue, shouting at the audience, and character actions that range from manic to the downright alienating. It kicks down the fourth wall like the Kool-Aid man, and then gets mad when I recoil at its intrusion into my personal space. I hate that Evangelion. I want to load all of it into a rocket and shoot it into the sun.

Yes, I know shooting things into the sun is harder than shooting them into an orbit of Jupiter’s radiation belt. The effort is justified when the characters start as dysfunctional weirdos and only descend into even worse people. Then, at the last possible minute the biggest weirdo of them all, the one who has earned the least redemption, has a change of feelings that is 100% unearned and is met with the literal applause of the creator congratulating himself for his self-tuckerization. Fuck that.