The hottest take I ever offered about Evangelion was that its entire conflict arc would implode if there was a single therapist working for NERV. Only now do I appreciate that Shinji repeating “center the mass, pull the trigger” like a catechism is proof that there must be a number of psychologists on the payroll. Shinji’s dead eyed stare and manic muttering amid a training simulation make it very clear that Ritsuko and her colleagues are conditioning him to be an ideal child solider. Perhaps I was blind to this realty on previous viewings because the cliché of military training is the binary of Sergeant Hartman and Gomer Pile.

Ritsuko uses routine, memorization, boredom, and the systemization of the unbelievable (i.e. being a giant robot pilot) to seemingly break and reshape Shinji. She doesn’t need to bark orders or humiliate him. Her tools are measured and professional. She plays Shinji’s need for acceptance as a carrot to keep him focused. She builds herself as a tether amid his isolation from the world within the Eva’s entry plug. Then, as a coup de grace, she – or more likely Gendo – sends him off to high school.

I never understood why high school was part of this story. It seemed so much fodder amid a show that wanted to be about the end of the world. In terms of internal consistency, it makes sense for NERV to keep potential replacement pilots close at hand. Sending Shinji there, as if to create some sort of normal life for him, always struck as injecting a bit of tedious slice-of-life into the science fiction. Now it seems as obvious in its brutality as Toji – one of Shinji’s classmates – giving our Eva pilot a beating. Gendo and Ritsuko would want Shinji to be around people who hate him to reinforce NERV as the only safe place for him.

Toji becomes the avatar of all the people who are hurt through Shinji’s half-ass piloting of Eva-01. This isolates him from the rest of humanity and subverts any expectation of gratitude that he might expect for doing his job. Where Ultraman rated a parade or two for fighting aliens and saving the Earth, Shinji’s first lesson in being the public face of NERV is ridicule and isolation from the people he is fighting to defend. I suspect this is why Shinji gets back in the cockpit to fight Shamshel, the fourth angel – which is technically only the second one that we see. How does that make sense? Don’t worry about it.

Shinji begins the battle with asking himself why he is going to fight when his father is not in Tokyo-3 to see it. I submit, he’s doing it because NERV sold him on the idea that his only value is in piloting Eva-01. Moreover, the only approval he is going to get for going into battle will come through the adults gradually turning him into a weapon.

The only thing that seems to throw a wrench in Ritsuko and Gendo’s conditioning program is that Shinji keeps getting his ass kicked. Despite weeks of training, Shinji remains a terrible pilot. He’s the “chosen” one, but being chosen doesn’t make him automatically competent. Shamshel tosses Shinji and the Eva around like they are rag dolls. Shinji only wins the battle through another berserker charge with the Eva’s holdout weapon. [retrospective note: I now know the progressive knife is not a holdout weapon. It only seemed that way in contrast to Shinji being trained on rifleman tactics with the Eva. Don’t @ me because Hideki Anno likes to interject post-hoc narrative whiff-whaff that contradicts those details which are immediately gleaned.] The victory is dumb luck amid rage, and uncontrolled rage is the opposite of what Ritsuko would want from effective conditioning.

On a related note that risks getting us stuck on the rocks of technical details – a most undesirable place since I don’t think Hideaki Anno was particularly concerned with any such attentions, therein – I’m curious if the arm wrench from Shinji’s previous battle indicates that Shinji always feels the pain of the Eva’s damage. The intentional shots on the human hands under the Eva’s burnt armour got me wondering if Shinji is feeling a physical pain in protecting Toji from Shamshel’s laser whips. Is the ordeal of fighting the angel made even more poignant by the physical pain that comes from having to defend the people who hate him? If so, I have another question: at what point does this just become piling on? 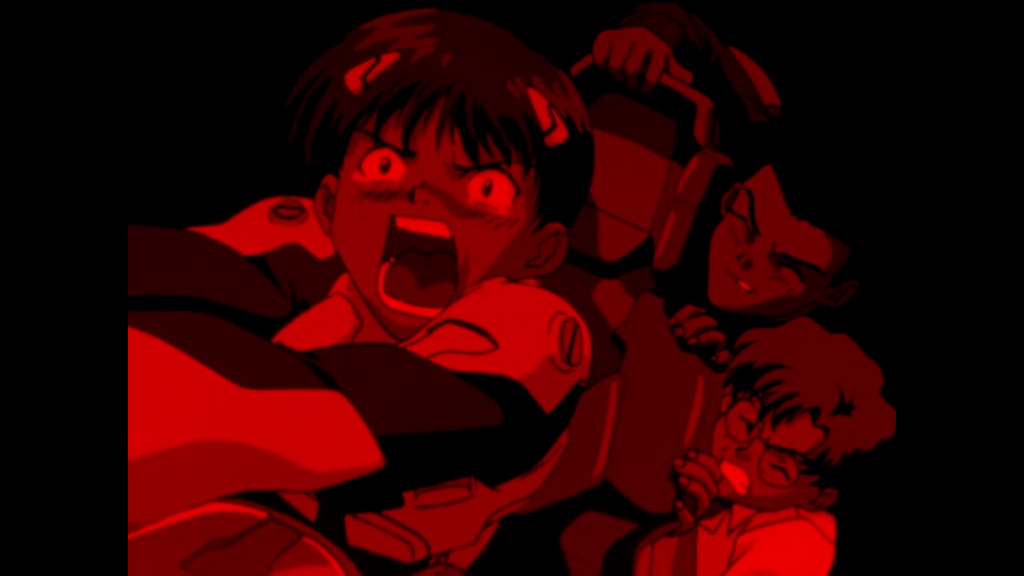 I’m three episodes in and it’s pretty clear that Gendo is the bad guy. Shinji, as the point-of-view character, is a totally unreliable narrator. And the series is pulling no punches in grinding Shinji down. He’s a mess of a person after only 60 minutes. Where does a story, any story, go from there? Granted, I’m seeing more to Evangelion now than I have in the past. At the same time, I know everything seen now has to be squared with a third act that is, the last time I checked, a conceptual and narrative nightmare. Perhaps we end up with Evangelion’s ending because there’s nowhere else to go when the first act is such a gong show of brutality.

Where does this version of Shinji go? How does the cold eyed killer in the making that we see in this episode become a squabbling goober that has to learn mixed doubles Eva piloting through Dance Dance Revolution? Recall what I said in my previous note from the future. Evangelion is a zoo of emotions. This episode shows a steely mecha man who we will never really see again. There’s no natural progression from this beat to the next. There’s no attempt at framing life in school / in and about NERV as things that catalyze change. This Shinji exists in service of the story at hand. For this episode, the writing dials up the alienation that comes with being the un-thanked hero – the owner of a phone that never rings. The next episode will have none of this steel as Shinji runs away from home.

That doesn’t mean episode three is doing anything wrong. In fact, I quite liked it. But knowing that the longer gambit at hand is not one that I particularly respect, this episode becomes an example of how, despite being smart and layered, Evangelion is often less than the sum of its parts.]