Days past a new Star Wars would have been grounds for celebration and anticipation. I would be bounding off the walls, counting down the minutes until those magic words landed on the screen: A long time ago in a galaxy far far away. I reveled in sharing contemporary mythology. Now? Jesus I don’t even know.

I can’t be the only one who feels like this used to be a lot more fun, and I mean that on every level. From the experience of seeing the movie to putting pen to paper on a review, there was a joy to new Star Wars. Past Adam was genuinely excited to write his review of Chuck Wendig’s Aftermath. And then, every asshole and their cousin watched The Last Jedi and anointed themselves the second coming of Mr. Plinkett – something the world absolutely did not need. Now I want to put the entire enterprise on a rocket, and shoot said rocket into the sun.

Case in point: every Star Wars panel I have been on or attended at a convention in the last two years has inevitably turned into a forum for some mouth breathing, neck-beard-having troglodyte shouting down the women on the panel. I once saw a Star Wars panel that was all women and the first woman to speak didn’t get through her introduction before a dude was interrupting her. Conversations about Star Wars have become things that I dread, as they inevitably herald someone showing off their ass on points of racism, sexism, or merely being a blazing asshole.

Why the hell are we like this? How have we allowed imaginary play time pew-pew lasers to become such a formative part of fragile psyches that people are willing to become radioactive nightmares of puss spewing villainy. Then again, I suppose that might be a faulty assumption on my part. I assume that people have become gargantuan shambling horrors of bigotry. The likely truth is that people were always like that, and now they’ve found a hill to die on.

Meanwhile, one of the largest corporate entities in the history of *checks notes* human civilization now leans back as an endless flow of vitriol directly translates to profits via hellsite marketing algorithms. Good work if you can get it. 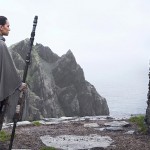