On Thursday night, a friend and I went to a preview screening of Star Wars: The Last Jedi. For the record, we both felt pretty good about the entire experience. I don’t want to turn this story into a review, but I’ll say that it struck me as something a little more nuanced than The Force Awakens, and much more in the tone of Rogue One or The Clone Wars TV series.

Returning to the story at hand. My friend and I were ten paces from the theatre’s exit when two guys, probably in their early twenties, stopped us.

“Hey, hey guys. Did you guys just come out of seeing Star Wars?”

My friend answered before I could. “Oh, it was shit. Absolute and total shit. Probably one of the worst movies I have ever seen.”

Now my friend is not a bad person. He’s one of the best people I know. He also happens to have a penchant for deadpan that can obfuscate the demarcation between his sarcastic and serious faces.

I was about half a heartbeat from jumping into this piss take. Then I had a moment where I could see time slowing down for these two fellows. The quiet one looked like we had just told him Megatron stepped on his cat while having sex with his mom.

I didn’t have the stomach to sire this kind of unhappiness, even if it proved temporary.

“Lads, he’s fucking with you. It was awesome. You’re going to have a great time.”

Great story, Adam. Is there a point to this beyond you managing not to be a dick for once in your life?

At the risk of overstating the obvious, I want this story to serve as a reminder that people hold powerful emotional attachments to Star Wars. Characters become sources of strength when the banality of real life would grind us down. Like all myths, Star Wars allows its audience to see something of themselves in a story beyond anything they will ever experience. In doing so, the story has the capacity to inspire the audience to become something grander.

Of course all of this high-minded idealism has to be weighed against the fact that Star Wars fans and fandom can be an utter and complete garbage fire. I have personally witnessed the shitty behavior that emerges when emotional investment turns ugly. There is no defense for weaponizing one’s affection for a thing as a tool to silence others.

That said, I want my personal post-credit scene to be a call for everyone to take a beat amid the rush to come up with the hottest take, sickest burn, cleverest think-piece, and smuggest admonition of The Last Jedi. I witnessed a couple sentences between strangers deliver enough force to up-end a person’ day. Perhaps this is one of those circumstances where we really owe it to ourselves and each other to try and do just a little better. Maybe we should think a little less about our own critical voices, and affronts to our own emotional attachments, and a little more about how those voices might shape the days of other people. 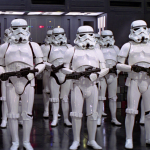