Remember a few years ago when Seth MacFarlane performed that song at the Oscars? You know the one I’m talking about.

Is the song gross? Or is Seth MacFarlane doing what a comedian does in holding up a mirror to Hollywood’s inherent sexism? Imagine if a hideous, shambling, multi-tentacled monstrosity thought itself Venus reborn. If the monstrosity gazed upon itself for the very first time and then flew into a rage, should it be mad at itself or the reflection?

Wait, please, don’t go. I feed on your validation. I’m promise I’m not trying to make a zombie out of a cultural meme most people would rather/have already forgotten about. I am, however, trying to make a clone out of it.

Yesterday I read about Fox trying to screw Gillian Anderson out of a pay cheque equal to David Duchovny for whatever season of X-Files is starting tomorrow. Does such shitty behavior surprise anybody anymore? In a world where Oscar winners use their speeches to call out gender-based pay inequity (among Hollywood’s many, many other sins) what made Fox think they could get away with this? My guess, cocaine and lots of it. How is this relevant to anything?

Fast forward to today. I was making lunch and humming We Saw Your Boobs. My wife walked into the kitchen and naturally proceeded to roll her eyes at me. I headed off the inevitable discussion on why Seth MacFarlane is/isn’t funny with a picture of our cats sitting on her desk. We decided they had the appearance of a cat-themed promo picture for the new season of the X-Files.

Cats led to a general discussion of the X-Files. X-Files led to pay discrimination. Pay discrimination looped back to Seth MacFarlane and a brilliant idea to retool We Saw Your Boobs into We Ripped You Off.

And on and on the song could go.

So there you go Seth MacFarlane. Have your people call my people and we can work out the licencing rights. 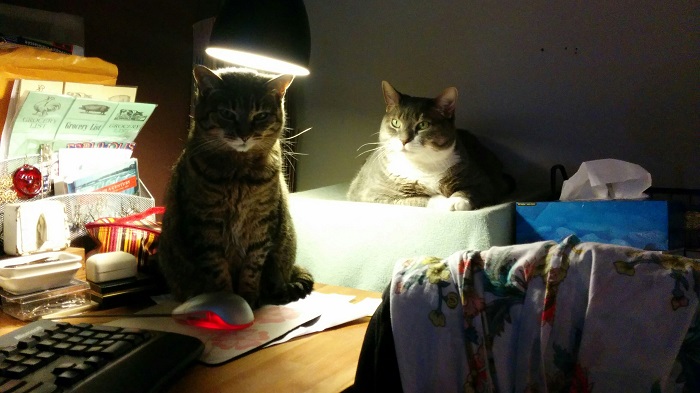 The Truth is Meowout There