Let’s take a moment to talk about Gendo Ikari’s office. I want you to look at this this picture. 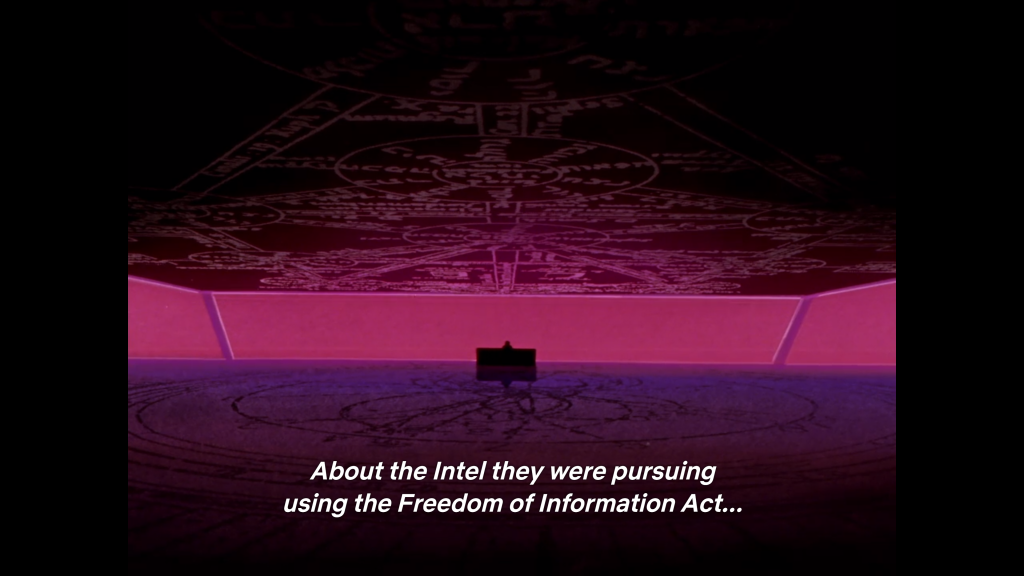 Now imagine this office as the pinnacle of a techno-pyramid that is an underground city’s seat of power. The floors and roof of the office are adorned with symbols and scribed Hebrew that skew between religious iconography and esoteric mysticism. A desk and chair are the only furniture. There is no need for artifice to suggest station or rank because the emptiness tells visitors all they need to know about this space and its owner.

Now ask yourself a very important question: is this your office? Can you conceive of yourself as the owner of this space? Or is this the dominion of a megalomaniac who believes himself to be at the locus of human salvation? I struggle to see a middle ground.

How did I never see Gendo’s Cthulhu-cult level bullshit on past viewings? What is it about this anime that made me oblivious to something so over-the-top that in any other story I would have cried foul over the telegraphing?

[retrospective note: You know the answer, past-Adam. You’re just afraid to say it for fear of being unpopular. That’s why I’m here to say these things for you, my sweet summer child of…really only six months ago? Life comes at you pretty fast.

You missed it on past viewings because everybody said this show was art incarnate. You didn’t want to be the philistine who disagreed. So you went with the flow because it was easier that way.

Fortunately for you, I’m in charge of this operation, and I’m not afraid to say that this series is pretentious bullshit that would be lucky to get published in a penny per page zine.]

Perhaps I can be forgiven on the grounds that this episode creates an incompetent corporate counterpoint to NERV, and I have an inherent dislike of corporations. Even within a fictional world, I revel in a singular catharsis at the sight of corporate failure. Call it the lingering influence of Paul Verhoeven colonizing my brain with RoboCop at a formative age. The more I see the Dick Joneses of the world sitting on their own balls, the happier I am.

Consequently, the mistake past-Adam made was in thinking that NERV was a heroic counterpoint to the incompetence of the Japan Heavy and Chemical Industries Consortium and their “Jet Away” mecha/drone. If there’s a single lesson to this episode, it’s that NERV is just another shitty corporation. Gendo, as NERV’s CEO, is not beneath protecting his government contract (which he will then subvert to take over the world) with some corporate espionage, sabotage, and a bit of good old fashioned corporate raiding.

The episode’s A-plot is about how NERV “solves” a disaster with Jet Away’s nuclear engine. Except that Gendo and his shadowy operatives, one of whom is revealed to be Ritsuko, hacked the controls and reactor safeties on the Jet Away in the first place. Why would he do this? Because NERV was burning through its discretionary budget on post-battle clean-up duties in Tokyo-3. Given these rising costs, a viable alternative to the Eva series might lead to NERV losing its funding.

[retrospective note: I had a guaranteed sale with ED-209. Renovation project. Parts for 20 years. Who cares if it didn’t work?]

Gendo Ikari is so desperate to sit upon his throne that he turns Jet Away into a walking bomb. The NERV team, including Shinji piloting Eva-01, are seen to be the heroes of the day who disarm Jet Away’s engine, despite the fact that Gnedo was in control of it the whole time. We can only assume that this exercise in engineered humiliation ensures that all of Gendo’s future budget requests get the rubber stamp. NERV makes OCP look like Google in the early 2000s, and we’re still meant to see them as the heroes of this story.

The episode reduces the fate of the world, or at least Gendo’s plans for the world, to the banalities of funding, which would actually be interesting if anybody could be expected to understand those stakes without having gone through the series a few times. For the newcomer, this is still robots vs monsters featuring creepy kids.

This continued focus on logistics and other mundanities when there are monsters to be punched translates over to the B-plot: Shinji and Misato’s weird fucking boss-meets-bad influence older cousin relationship. Shinji the child solder embraces the morning routine of toast and coffee. In doing so, he comes to resent Misato’s rolling out of bed to crack open a couple of beers and lounge about in her underwear before going to work.

There are things to be said about Misato’s obvious alcoholism, but the more interesting narrative beats are the juxtaposition of the happy morning routine music, complete with an adorable penguin to add some light to the darkness, against the fact that this routine and Misato’s role in it works to make Shinji that much more of a pliant little soldier. Her seeming lack of professionalism is an alienating force on Shinji, which, in turn, makes him want to be that much more of a professional.

The only thing that pumps the breaks on this potential for dysfunction is the fact that Aida and Toji take the time to point out the trust that Misato offers in letting Shinji see her without her mask of professionalism.

[retrospective note: this is further evidence that high school isn’t an attempt at creating a social control over Shinji. Or if it is, it is a poor effort as Toji and Aida, people he never would have met outside of school, are giving Shinji an ability to connect with Misato rather than resenting her.]

This is an unexpected moment of kindness from anime Rosencrantz and Guildenstern, to be sure. But a critical audience should be quick to remember that these two pull no punches in telling Shinji how much they want to bone his ersatz step-mother.

Teenagers, am I right?

Speaking of teenagers, why is this angle necessary? 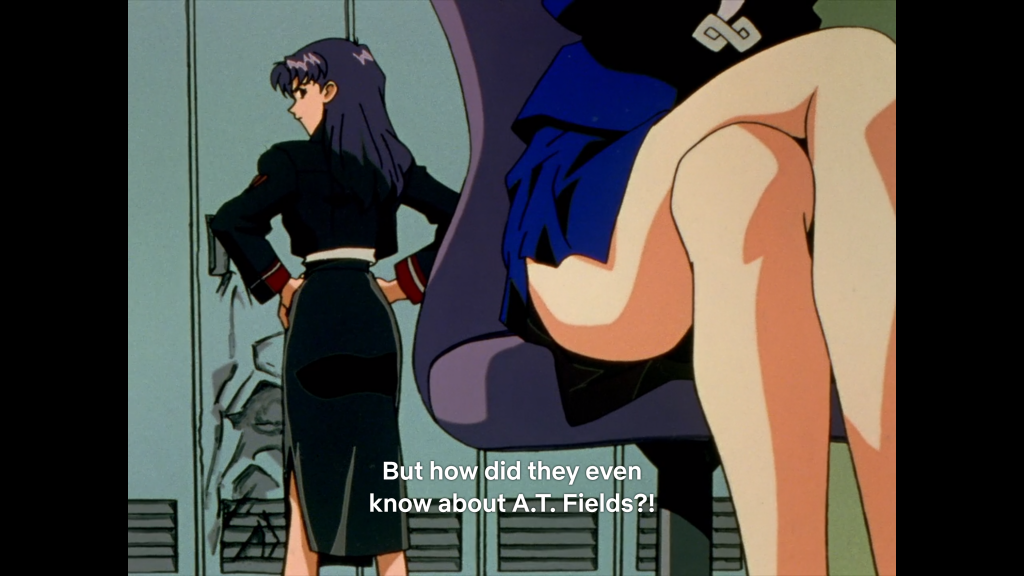 Back in the A plot, the gentlemen from Japan Heavy and Chemical Industries Consortium call Ritsuko a hysterical woman (no, for real, they call her hysterical and thus incapable of reason). Is it really necessary to frame the follow-up to this chauvinism with a borderline upskirt? This is not the first time Evangelion has offered up some dubious camera angles. Moments like this one, which are nothing but intentional efforts to gratify a leering audience, make it really hard (shut up) to lean into the series’ philosophical beats.

I know, I know, things don’t have to be monolithic. But it’s one thing to have the camera catching Shinji being a creep. Perhaps, if we squint, we can see his creepy self-loathing manifest as consequence of the world passing him around as a weapon to be used at the leisure of others. In contrast, the above moment of voyeuristic fan service really makes me wonder about Hideki Anno’s intent.

Did he feel like having a leer? Did he not trust his teenage male audience to endure a scene of women talking about chauvinism without giving them something to gaze upon? I fail to see the value here.

I can see my past-self turning away from the lofty ideals of this review series. He’s getting tired of Evangelion. He desperately wants to keep to his mission statement for this long form review – to see on a third viewing of Evangelion that which he missed in the past. Instead, he keeps running headlong into stories that feel half-baked.

Some part of him is still afraid that people will think he is stupid if he doesn’t fawn all over the series. I am now free of such fears. I’ve burnt away the last lingering bits of Shinji Ikari that drive my past self towards needing approval. I’ll say what he won’t. Nothing of value happens in this episode. It builds intrigue for the sake of intrigue, but most of it could have happened off screen. It hints at a bigger game, which is good, but said game is never going to materialize.

Episode 7 offers a trail of breadcrumbs that will carry through the end of the first act, as seen in episode 8, and then continue through the entire second and third act right up until the third-to-last episode. The only thing Evangelion does well with this protracted imposition on patience and persistence is making its audience think that the truth is just around the corner. Watch one more episode and things will make sense.

It will keep throwing out broad appeals to pathos so the audience feels seen, but it won’t ever actually get around to doing anything that approaches coherence or a narrative payoff.]