I wanted to draft this review on a Saturday. Alas, this episode left me so torqued up and full of the beans, which is how I describe my cat when he is irrationally ill-tempered, that I thought to give myself time to mellow. A Sunday afternoon viewing offered no calmer insight into Lies and Silence. Now here I am, on a Monday, and while the beans have subsided, an overall sense of boredom and frustration persists.

To wit, you can’t dump a bunch of gimmicky back story into a series and call it character development. Furthermore, after fourteen episodes, nobody is going to make the mistake of thinking that anybody at NERV is well adjusted. Why then does episode fifteen devote itself to…let me just check my notes here…ah, yes, showing that everybody at NERV ranges from overtly terrible to cripplingly maladjusted? There’s no contrast to be found in such an exercise, because the audience already knows NERV’s crew are a bunch of maladapted weirdos.

Here are the bullet points:

We see Gendo as equal parts distant father and obsessed with Rei.

We see Shinji as someone who lives in his father’s shadow while being weirdly obsessed with his mother.

We see Asuka as the worst fucking co-worker and roommate ever.

We see Kaji being mysterious and playing his own agenda.

We see Rei being enigmatic and weird.

We see Ritsuko being obsessed with her work.

We see more sexual tension between Misato and Kaji.

None of this is new knowledge. What sort of recap episode double play is this? Is it at all possible for Evangelion to come up for air, or maybe just move the plot within the confines of a whole episode rather than shoehorning the story in as an after thought? Is there an artistic reason for the audience being subjected to the characters revisiting the same old traumas before the writing pitches hard toward a study in the banality of people going about their work? 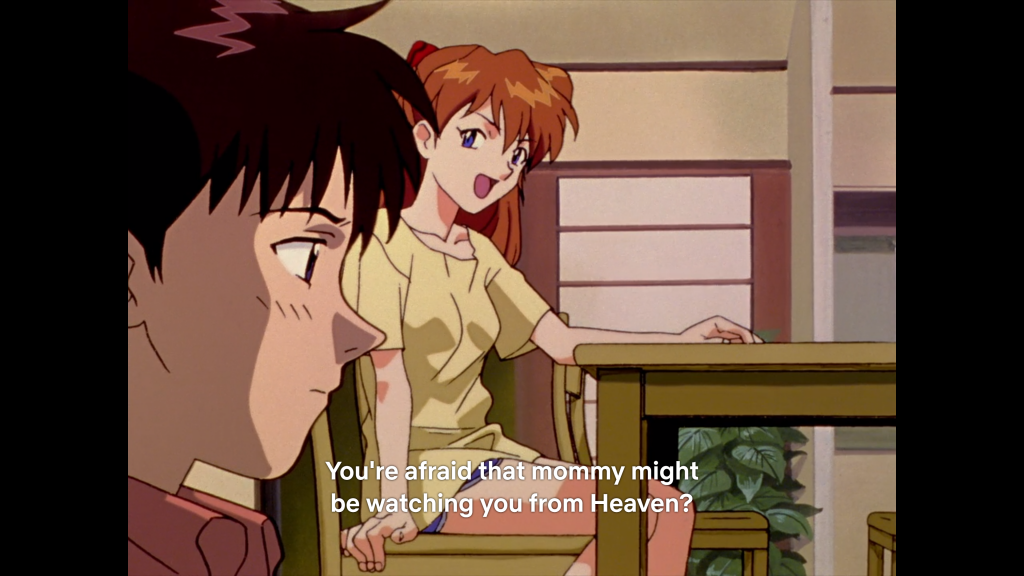 I mean, I get it. People hide their pain. People make decisions, questionable or otherwise, because of their pain. Let me say, for the record – because it may not have been clear for the people in the cheap seats – the pain is acknowledged. It was seen ages ago in this series. Once again, I find myself asking the not unreasonable question “now what?” only to find that Hideki Anno putting on another pain pantomime. What else is there that I can work with as critical clay in this story? Because in the absence of anything resembling substance, I’m left to ponder on drunk-Misato telling Kaji that she was afraid to be a woman with him, and that’s just a big middle finger to some of my previous theories on depth in this series.

[retrospective note: you wanted to see so much in this story, Past-Adam, and it disappointed you. Hideki Anno asked you for faith, you gave it to him, and he returned nothing. And so help me, I do not want to hear any of you nerds lean in and say, “that’s the meta-narrative on religion within the series, Adam.” No. The absence of a story is not a story. You don’t get to fill a room with farts and declare yourself air freshener when the room clears of its own devices.]

We’ve known that Misato is a wreck of a human being from almost word one. Case in point, Misato lays claim to the following: weird relationships with teenagers; an alarming frequency of breakfast beers in the fashion of a celebrity rehab candidate; a singular ability to compartmentalize her mess and pass as a functional adult. Back during the single digit episodes, I thought she acted this way because of guilt and shame over turning Shinji into a weapon. I thought she was a willing accomplice to Gendo being a monster. Instead, this episode’s Misato revelations are about…boy problems?

She sees herself as a coward, going so far as to compare herself to Shinji, because she wanted to find a man who was like her father, but she also hated her father. Well there goes my “complicit in creating a child soldier” theory. I remember when I saw something of myself in Misato, but that was when her flaws made her more relatable. Now they are reduced to a façade amid an utterly textbook excuse for an infodump. In vino veritas: that’s the episode for Misato. 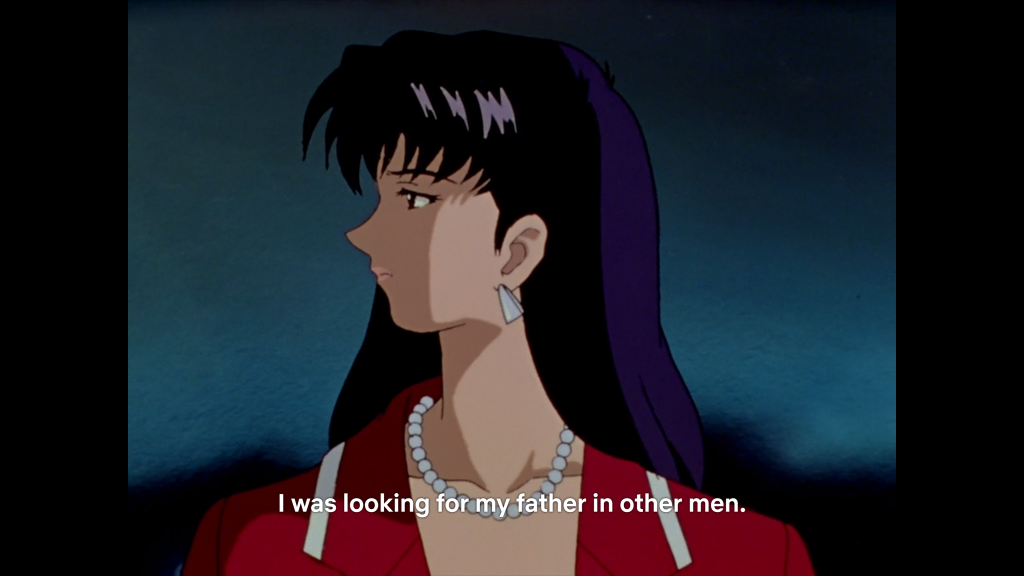 I’ve said it before, and I’ll say it again right now, Evangelion doesn’t know how to stay out of its own way. There were other ways to put Misato and Kaji together in NERV’s basement for the big reveal that Gendo has been keeping Adam, the first angel, crucified against a wall. Oh yeah, that’s a thing now. It took six hundred words to get to NERV keeping an angel in the basement, because that’s how little this episode cares about that reveal. What are the implications of Adam being a crucified monster thing? I have no idea. The episode literally spends four fold more time on Misato barfing, Kaji helping to haul her drunk ass home, and Asuka gargling after kissing/erotically asphyxiating Shinji.

How does this angel connect to Seele’s threats to have Gendo stripped of his leadership of NERV? Again, I’m not sure. All we learn in this episode is that Kaji is, at once working for NERV, and working for the Japanese government. In the latter capacity, he appears to be looking into the dummy corporations owned by the Marduk Institute, which if you go way back to episode one is revealed as the group that identifies the children who are fit to become Eva pilots. Somehow, Seele, Marduk, Gendo, and the UN are all at odds with each other, despite Seele insisting that Human Instrumentality is of the utmost importance. So, the guys who wants Instrumentality don’t know or wouldn’t approve of an angel in the basement?

[retrospective note: I know this is going to be revealed as not Adam in the basement but Lilith, who is…mom of all humans or something? I honestly don’t remember, and I don’t care to look it up. This is how little this reveal matters in any tangible sense. Parsing the difference between Adam, Lilith, the Angels, and the Evas doesn’t actually matter to the story. Shit is going to happen, and the series doesn’t really care if it is bringing the audience along for the ride.]

A further question, is this the same Adam that was trapped in a brick of bakelite back in episode 8? Have they been growing Adam from a fossil, and that’s what Gendo means in the top of this episode when he says the Eva project, the Dummy Plug project, and Human Instrumentality are all interconnected?

[retrospective note: it doesn’t matter. It is a pointless question.]

I could go on like this but I really feel like the effort would be wasted. If Evangelion isn’t going to care about maintaining a cohesive plot, then why should anybody else invest the time in bringing order to chaos? Episode 15 really makes me question the strength of the writing’s master plan. In a post-Lost/Battlestar Galactica world, we want to believe there is a solution to the mystery box. Maybe there isn’t in this case.

Evangelion might be a mile wide, which is an impressive accomplishment, but this double-down on showing the misery at the core of the human existence really makes me think the metaphor is only an inch deep. The audience’s role might be nothing more than to internalize the creator’s pain/the pain felt by the characters. Said pain mostly tracks back to Gendo/parents actively making things miserable for their children/wards. The thesis of this series can’t be that simple, can it? Everybody is mad at their dad featuring big stompy robots?

I mean, I know I’m being cheeky there, but strip away the religious imagery, and a lot of what drives this show is relationships, some very oedipal, with one’s parents. Case in point: while cleaning their classroom, Shinji observes Rei wringing out a rag. Later, at NERV HQ, he says that she wrung that out like a mother and that she might make someone a good housewife one day. 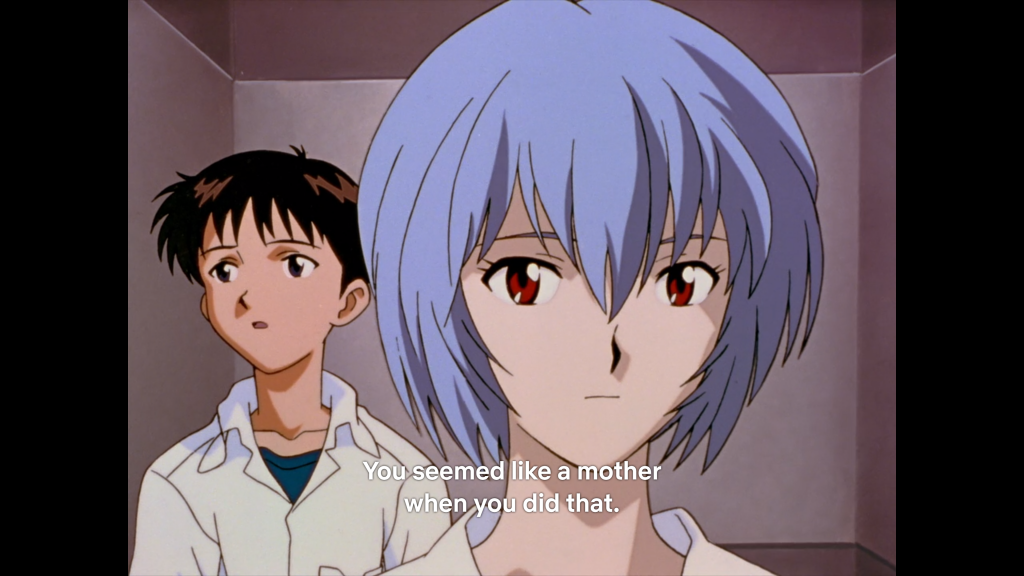 To recap: Shinji hate/loves his father while fostering a weird crush on the clone of his dead mother, who is constantly at Gendo’s side. This episode takes that a step farther with Shinji and Gendo visiting the grave marker of the late Yui Ikari; thereupon, Gendo says that the only things that are important are the things we carry with us. A NERV jet then fetches Gendo only to reveal that Rei is aboard the ship. Who needs a picture of one’s late wife when they can breed an army of her clones?

How have I written so much about an episode that says so little?

Yeah, that’s a great question, Past-Adam. I suppose a better question is this: how does Evangelion go on so long with so little to say.]