Oh good, it’s a recap episode. This series absolutely calls for a recap episode that engages in the shallowest YouTube mashup of angels getting destroyed. This is where I started losing patience with the series in the past. In part owing to my hate for recap episodes, but also because once we are caught up on the anti-climactic montage of robot-on-angel slap fights, the story veers hard into the first of what will prove to be many incidents of Rei performing conceptual beat poetry.

I have so little time for Rei asking, “Who am I? What am I?” while speculating on “did god make man” or “did man make god” for the same reason my adult self bounces off Frank Herbert’s Dune: both assume the audience has bought into internal mythology to the same extent as the creators. Even amid this, my third time watching the series, I barely grasp the importance of Rei saying that she feels like there are other versions of herself. Despite this knowledge, I struggle to care. 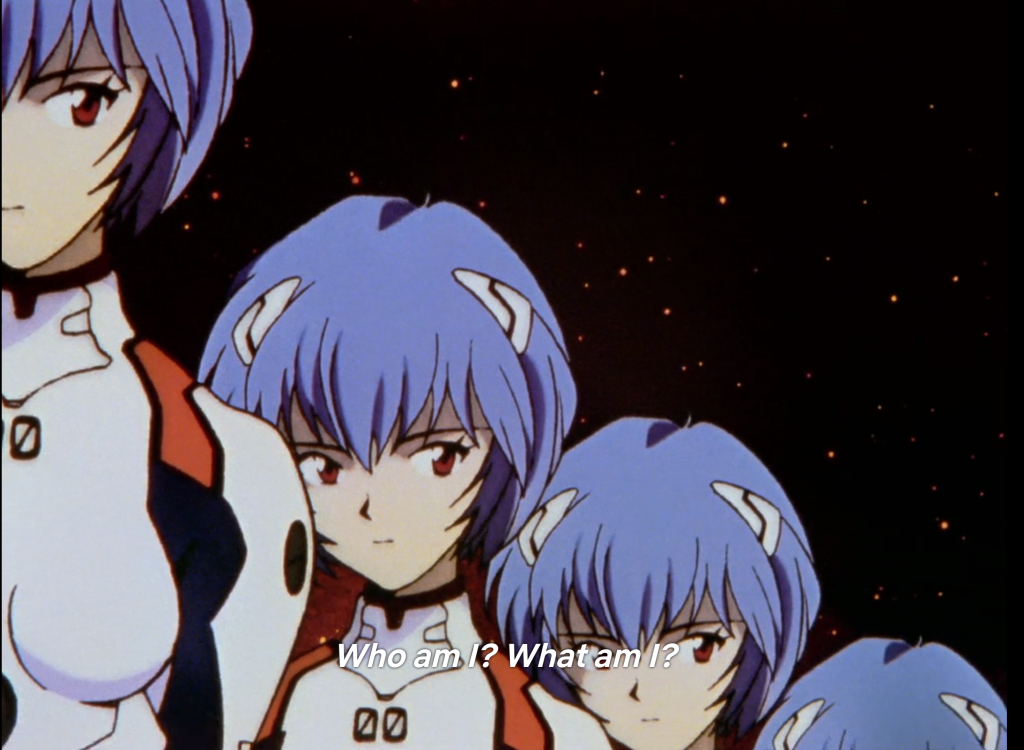 On first blush, the image of multiple Reis, as well as Gendo’s fixation on Rei, would come off as little more than a continued extension of creepy power dynamics between NERV’s commander and the first child. At its worst, the entire sequence is off putting and weird. It is the sort of sequence that satire writers send up as examples of vanity and pretension. Tracing the oasis of sense that comes with Evangelion’s first delve into the desert of high concept nonsense is only possible due to the vague recollection that Rei is a clone of Shinji’s mother, I think. It also helps to know that Gendo is trying to reduce humans back to their primordial state as a gestalt creature.

Likewise, Ritsuko blaming herself for Eva-00 rampaging has more context now than it did before. But like so many things I have talked about in this series, the moment is wasted if one doesn’t know that Ritsuko and Gendo are/were fucking, and Eva-00 is connecting with Rei’s past life memories. Thus, the big robot wants to smash Ritsuko in the mouth for fucking around with her husband/father…I think.

Hey, am I dumb, or is this show dumb?

[retrospective note: the show is dumb.] 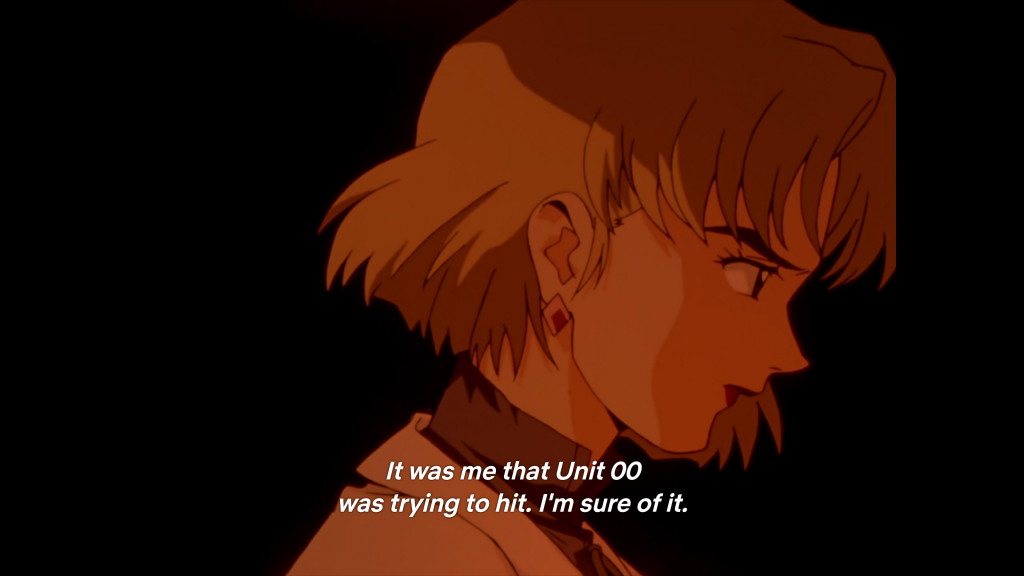 Because in this moment I’m willing to entertain the notion that I am being too petty. Could I be writing off something deeply layered as deeply obnoxious?  [retrospective note: Stop it, Past-Adam. You’re not. A story that requires multiple viewings to understand what the author is about, when the author is about little more than public therapy and nebulous metaphors, is one that forfeits any right to the benefit of the doubt.]

I had this problem when I watched The Good Place. I immediately saw that the scoring system of the Good Place was inherently unethical and assumed that the show was being frivolous. It was a great day when Michael echoed my exact thoughts two seasons later, but I almost quit the show before getting to that point because I saw the game for what it was. Is that what is happening here?

[retrospective note: No, Past-Adam, that’s different. First and foremost, you were right. You saw through the game after three episodes. You out Martianed Veronica Mars. The other issue is that we thought The Good Place was a sitcom in the style of The Office. Our sin was in not paying attention to the right things, like episodes laid out as chapters. Moreover, The Good Place’s reveal happened early enough, and with enough gusto as to bring you in on the joke. None of that is happening in Evangelion.]

Try as I might, I can’t think of an example of how Evangelion is looping back on past narrative constructs to deliver a story someone should care about. Where is the payoff for knowing that Adam is the seed of all life on Earth and NERV shipping it across the ocean was a big deal? Where is the sense of growing consequences to Asuka’s endless crappy co-worker syndrome? What happened to Shinji’s growing coldness and distance from humanity as NERV turned him into a weapon? This episode shows him waking up in the hospital after Eva-00’s rampage, and he’s more annoyed than anything else.

Meanwhile, Gendo’s super villain mood remains menacing, but it has also shifted into idle. There’s no evidence of forward motion. Sure, he’s lying to Seele aka the colour coded council, but what else is new when it comes to Gendo lying to the government to advance his agenda? This makes the episode’s revelation that everything is proceeding according to the timeline laid out in the Dead Sea Scrolls somewhat frustrating. It’s a framework that adds an air of artificiality to the story. Gendo waiting for his plan to unfold, rather than actively doing things, feels like something that deflates any sense of tension. It is as perfunctory as the front end of the episode rattling off the battles with the angels. Now the audience is left to wonder if the Gendo pose is about planning or looking cool as one waits for things to happen.

[retrospective note: it also means that we should never expect character deaths for anybody important because the Dead Sea Scrolls are effectively acting as plot armour.]

The series needs to do more than convey Gendo’s scheming through the visual metaphor of him playing chess at his desk. If we can’t see Gendo getting into the game, then why should the audience get engaged? What I’m saying is that there has to be something more to Evangelion. Despite the high concept trappings, the series still feels inchoate beyond the initial themes that were much more impactful back in the single digit episodes.

Alternatively, I’m just not smart enough to see what this show is doing.

Moreover, a lot of the perceived religious metaphors kind of fall apart under even the slightest bit of scrutiny. I think the writing banks on nobody looking up the Dead Sea Scrolls to see that they largely contain a Hebrew telling of the flood and various Judeo-Christian apocrypha that didn’t make the director’s cut of anybody’s bible. Specifically, the Book of Enoch, whose fragments were found within various scroll fragments, details the creation of demons, giants, and certain angels falling from heaven. Demons, giants, and fallen angels – sounds a bit familiar, doesn’t it?

Could it be that the alleged deep religious symbolism that Hideki Anno weaved into Evangelion is closer to his plumbing the depths of Christian mythos for some cool stuff? It is okay if he did. I’m not judging the approach. Blizzard did the same thing with Diablo, and I love Diablo. In this case, I don’t see a problem with taking lesser known Christian ephemera and throwing in some kaiju.

Christianity has no shortage of weird stories that pair well with actual historical events. If someone pitched a series about George of Cappadocia betraying the Praetorian Guard to fight a literal dragon, who is also the personification of Emperor Diocletian, I wouldn’t say no. I also wouldn’t read too deeply into such an assemblage of Roman Catholic-themed action. Just the same, cross-shaped explosions and robots holding a Spear of Longinus doesn’t automatically make Evangelion smart. It establishes a mood, but a mood is not a story.

I mean, I spent an hour looking through the absolute bowels of the internet to find some meaning to the name Ireul, the computer virus angel. Once I got past the copious Evangelion fan pages, write-ups on the 72 names of the Christian/Hebrew god (and or god’s angels – of which Ireul was not one) I landed on a Kabala webpage that told me that having the name Ireul meant I could have lower back pain or kidney problems. 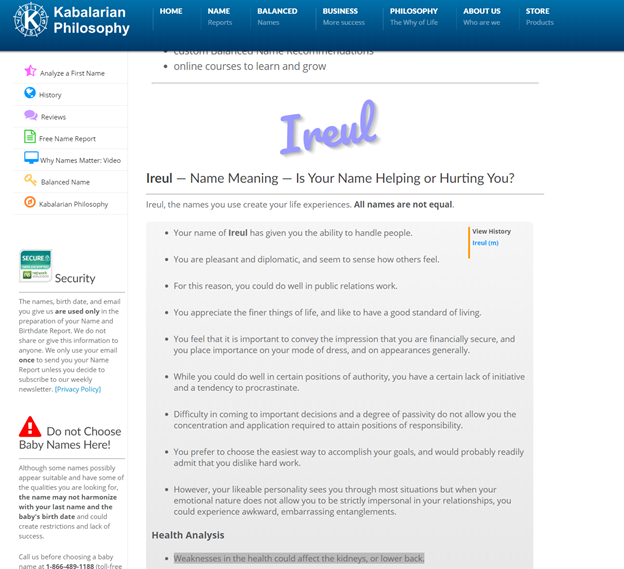 Past-Adam may have been a dick in how he went about interpreting this show, but perhaps he wasn’t as wrong as I thought. Certainly, I was blind to the emotional beats that the series was putting out in its early episodes. However, that focus on emotional turmoil is no longer as well executed as it was. The writing reached a point of suffering and then walked things back, perhaps realizing that it could not keep up that kind of intensity for 26 episodes.

Which brings us to the ultimate question I take away from this waste of an episode: if the emotional content has ebbed, and the big bad plot is largely on autopilot, what am I supposed to be caring about? Why shouldn’t I skip to the end if the battle with the angels is all part of a deterministic plan?

Morbid curiosity is the only thing pushing me forward at this point.

There are still twelve more episodes of this shit to get through. Fuck me.

You know, this show wouldn’t be half bad if it leaned into its own absurdity with a bit more of the Diablo flare. It is possible to be both bonkers and serious without having one’s head shoved firmly up one’s ass.

I could even let Evangelion’s indulgent self-seriousness slide if the series gave some indication that it had any sort of internal memory to what it was doing. There’s no sense of cohesion to Gendo’s big bad plan. The slipshod way in which plot threads are picked up and dropped makes me feel like the story brought to life was an unpolished first draft. The series’ narrative mess is entirely dissonant to Gendo tenting his fingers and waiting for his grand order to reveal itself. Characters in the series might buy into the façade, but since I’m not in the market for a new religion via Hideki Anno, I have no reason to take the series on faith.]