There’s a single word that captures the tone of this episode: slapstick. Asuka’s completion the Evangelion pilot triumvirate is choc-a-bloc with pratfalls, physical comedy, cringe worthy sexual innuendo, and Misato’s business professionalism evaporating into so much grappling for a microphone with a navy admiral. And because this is Evangelion, all of the not-so-harmless shenanigans are bracketed with the final proof that Gendo is Dr. No.

Most of my issues with this episode return to the question of foreknowledge. If one doesn’t know what is coming, how much of the interplay between Toji, Shinji, Asuka, Misato, and Kaji (Misato’s ex-boyfrend who also works for NERV, because of course) could be played off as the writers having the worst day of their lives? Consider that Asuka is introduced to the series as the end point of Toji chasing his baseball cap across the deck of an aircraft carrier. Why did Misato bring the kids to an aircraft carrier transporting Eva-02? Literally, shits and giggles. She thought it would be fun. Cool. Great move from an operations officer. I can’t see any flaw in bringing kids to a ship transporting humanity’s mutant alien mecha.

Asuka announces herself to the audience as she stomps on Toji’s cap. Toji’s attempt to free the hat from under the beskirted Asuka plays out exactly as you might think. The winds of anime doth blow up Asuka’s skirt, a la Marylin Munroe, but without the bashful attempts to rein things in. Toji, naturally, gets an eyeful. Asuka then goes upside his head.

*retrospective note: if only it had ended there. It would have been weird but we all could have got on with our lives. Instead, we are going to talk about this for another 500 words. Look, if I had to suffer through this bullshit, so do you.*

Asuka punctuates the slap by saying that it was “the cost of admission to the show.”

Like Rei and Shinji, Asuka is supposed to be fourteen years old, but she’s talking about herself and her body with a creepy level of agency. The experienced viewer knows that she’s putting on airs. Rather than diving into routine as a coping mechanism for being weaponized – a la Shinji – Asuka hides behind a veneer of ersatz adulthood. Misato says that she’s grown, and Asuka responds by saying that she is “filling out in all the right places, too.” So when Toji gets an eyeful, Asuka deflects the violation through transactional language. That is some next level shit coming from a teenager. But does it mean anything to an audience who doesn’t come primed with the foreknowledge of what is going to happen/has happened to this character?

*retrospective note: no, it doesn’t. It’s uncomfortable as shit, and not in any way that pushes the audience to self-reflect. This is not art up-ending the status quo for the sake of a message. It eventually gets there, but by then it is as an answer to a question the audience has largely forgotten. And by that point we are deep into Kubrickian introspection, and that is its own kind of alienating.*

A better question is this: are those two lines of dialogue that augur Asuka’s emotional state and backstory going to stick in the audience’s memory when the immediate follow-up is Toji whipping out his dick? I’m not joking. That is literally what happens next. He leers. She slaps. He decides that the appropriate response is to drop trow and pull a 90s version of a ‘deez nuts’ bit. Naturally, the adults in the group visit absolutely no consequences on Toji for his actions – because anime.

The other indicator of things to come, which might not mean anything to anyone except MFA students and people who know what is coming, is the UN navy’s naming conventions for its ships. 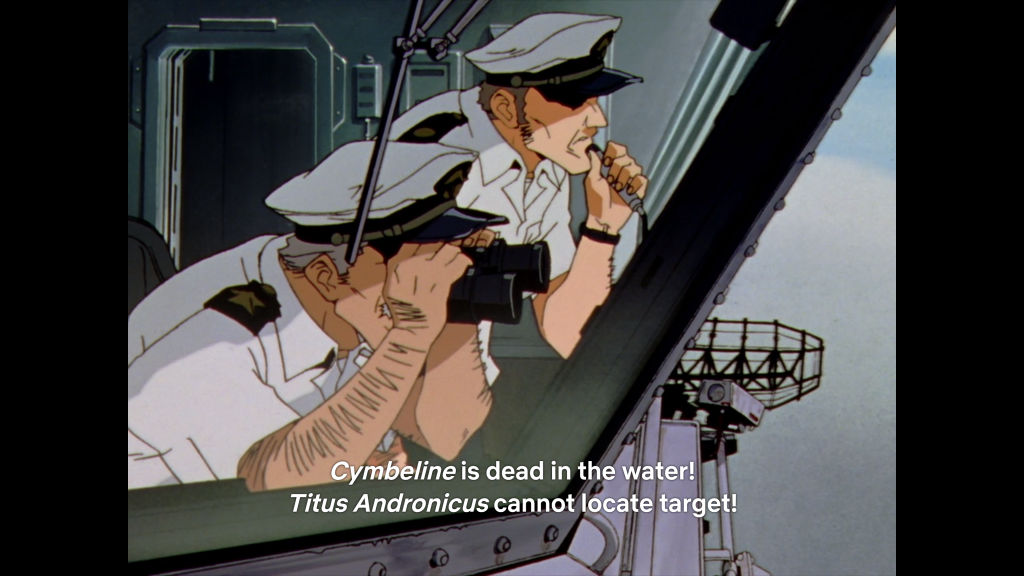 When Gaghiel, the sixth angel, begins sinking the UN navy as if it is, in Misato’s words, searching for something (hint hint), battle chatter reveals ship names like Othello, Titus Andronicus, and Cymbeline. These are neither fun plays or well-adjusted characters. Old Titus could give Gendo Ikari a run for his money as world’s greatest dad. Othello is driven by insecurity and jealousy as a racial outsider among Italian aristocracy. Cymbeline is indifferent to his daughter’s personhood save for her capacity to produce a suitable heir to the throne of Roman Briton. The plays house all manner of codependent relationships, family affections twisted to ruthless ends, and monstrous cruelty of both the emotional and physical variety.

The darker impulses at work within these plays, their grand scope of human misery, is only captured later in Evangelion as the working relationship between Asuka and Shinji metastases. And so we return to the fundamental question, is this obvious effort at layering a deeper reading into the story evident amid Asuka and Shinji pushing and shoving inside the cockpit of EVA 02? Does the comedic awkwardness/utter cringe of Shinji catching Asuka half-naked while changing into her combat suit hijack the deeper narrative?

I think it does. I think you really have to work in cruel thesis defense of Evangelion to see the merit in its subtexts. Taken episode by episode, shit falls apart. Now that said, some of the creepy shit in this episode does come, retroactively, into focus as broader markers of trauma. I think the problem is one of balancing nuance amid conventional anime tropes. It’s not uncommon for comedic anime to play fast and loose with characters doing creepy things (e.g. upskirts, peeping, piling on with innuendo). However, the line between subversion and leaning-in to deconstruct a trope  only reveals itself later in the series and after multiple viewings. In light of that, it entirely fair for someone to look at an episode like this one and write it off as so much flotsam. 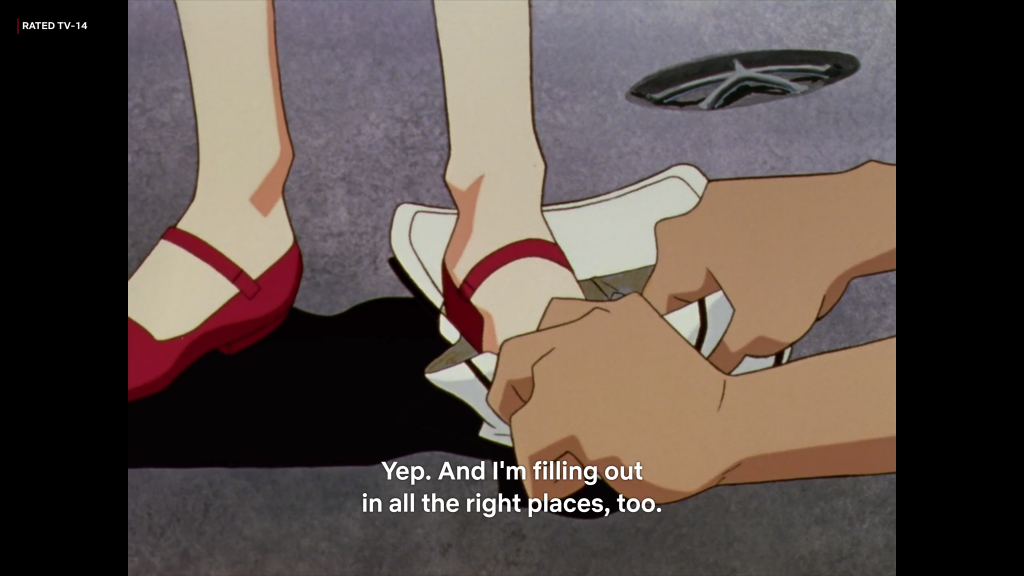 Beyond the confines of so many narrative train derailments, two scenes in Gendo’s super villain office manage to frame the grander conflict. In the front-end, Gendo reports that “the package” is being transported on the UN’s pacific fleet. The audience is meant to assume that he is talking about EVA-02. However, a scene transition mid-episode shows the audience that there is a literal package in Kaji’s room (yet another reward for an audience who watches the episode more than once). Only at the episode’s end does the audience see the package for what it is. Kaji was transporting a remnant of “Adam” the progenitor of all humans and the key to the mysterious Human Instrumentality Project.

With foreknowledge in hand, I know this is why Gaghiel attacked the UN fleet. It didn’t care about EVA 02, it was after Adam. For an audience absent the insider baseball, I feel like this is the first time Evangelion meaningfully illustrates the long arc within a single episode. One might see shades of Gendo’s plan in the previous episode, but that could be written off as simple corporate raiding. All the cringing and awkward screwball comedy that happens in this episode – up to and including an admiral’s editorial on being a glorified babysitter – drowns out the fact that Kaji’s arrival at NERV is the most important narrative beat.

With this in mind, there might be case for saying that the distraction was intentional. Is it a meta level of storytelling where both the audience and characters are made to look away from the actual story? I won’t rule it out. But after everything we’ve been through up to this point, I don’t see what one could hope to gain by trying to perpetrate such a gambit with the audience.

It took eight episodes to show that Gendo is the architect of something more dangerous than any rampaging robot. What is gained by narrative sleight-of-hand after taking one-third of the series to set the actual conflict? One would think that such slow pacing would encourage a more honest relationship with the audience. I said this when I was writing about Cowboy Bebop, and I’ll say it again here: the audience will only buy so much on credit before demanding a payoff, or at least a divided for their time. From where I sit, Evangelion is not paying out nearly enough for the investment it demands.

This was the episode where idealistic Student Adam died and Critic Adam took over the pilot’s seat. I’ve spent enough time editing my own work and navigating my own thought processes to see the shift. Let’s mark part eight of this review series as a watershed moment. Therein, the series’ bullshit could no longer be bracketed as a means of focusing on the empathy and trauma so often touted as this series’ virtues.

I could not bring myself to care anymore.

I wasn’t quite ready to say those words aloud to myself at the time, mind you. That would have felt a little too much like admitting I wasn’t up to the task at hand. What is clear is that the cognitive dissonance of suggesting one needed to look past upskirts and dick showings to have compassion for the characters and the creator’s pain was a bridge too far. And so I shifted gears from a space of vulnerability to a place of literary criticism. It was a defense mechanism against the fact that all of the one-ness that Evangelion is driving toward – the themes of compassion and empathy that it revisits for the purposes of showing Shinji as a tortured lonely soul – stopped meaning anything to me.]