Let’s shake things up, and open with the retrospective note. Why? Because this episode bored me. An angel falling out of space to smash NERV to smithereens should not be boring. Yet, defying all laws of gods and men, this episode was as boring to watch as it was to write about. I didn’t really know what to say. I went on talking about bullshit in the hope that some idea would dawn upon me.

The thing about this episode is that it is the absolute lynch pin to the rest of the series, but there’s no way to know that until the very end of the series. To wit: every shitty thing that Shinji does, every selfish decision and creepy choice – including having a wank over his comatose co-worker in The End of Evangelion – is going to come back to the lone atta-boy that Gendo offers in this episode.

I don’t want to be overtly cruel and dismiss the power that emotionally distant or abusive parents can have over their children. This is a real power, and it is an absolute tragedy that people have to negotiate life with those specters haunting from the margins. At the same time, I’m not inclined to extend that sympathy to Shinji Ikari or any other character in this series. The shoddy story telling noted to date makes me so very not interested in diving into Hideki Anno’s emotional baggage as offered through Evangelion. I am not your confessor, Hideki Anno.

Certainly, this episode offers a glimpse of feeling seen for people who have suffered through manipulative or abusive parents/bosses/authority figures. It is understandable that someone could bring their own sense of alienation to this series and in doing so they might see something of themselves and the control dynamics that enthralled them. I’m not shaking my head at those dynamics or people, so much as I am pointing a finger at Hideki Anno for manipulating the audience into thinking this series, this episode, is some sort of dialogue.

The audience is not meant to be seen.

Hideki Anno makes this clear with his dumpster fire of a series coda and two title cards that all but admit this was about his relationship with his parents and not, gentle reader, anything you might be offering. If there is empathy at play between the audience and the narrative, it is most certainly a one-way street toward Evangelion. Moreover, a genuine empathy between creator and audience shouldn’t require multiple viewings and 40,000 words of half-baked analysis to be understood. It should be as honest as it is self-evident, but as past-Adam so eloquently noted, Evangelion is a show about lying, self-deception, and exploitation.

And now, the balance of the review, such as it is.]

What is the worth of a miracle if it can be forged by man? Is it truly a miracle, or is it science compensating for the inherent weakness of humanity? Early humans endured because of our ability to be smarter than environmental threats and predators. We rose to be masters of the world around us through our relentless belief that one can always build a better mousetrap. This is the arc of humanity, and in this episode it is as self-evident as it is absolutely mundane.

Here’s the summary: NERV, but mostly Misato and the kids, pull off a miracle in defeating Sahaquiel, the tenth angel. They then go out for a bowl of Ramen because Misato is poor. Roll credits.

The battle sequence is, once again, near-to-being inconsequential. Though the stakes of the episode are described, they are never really felt. Case in point, Ritsuko takes a couple of opportunities to tell Misato that the odds of using the Evas to catch an angel that is going to hurl itself from orbit into NERV HQ are worse than a million to one. Misato shrugs and says she is betting on the kids and the EVAs to make a miracle. The most pressing part of the entire exchange is the prolonged camera shot on Misato’s ass. 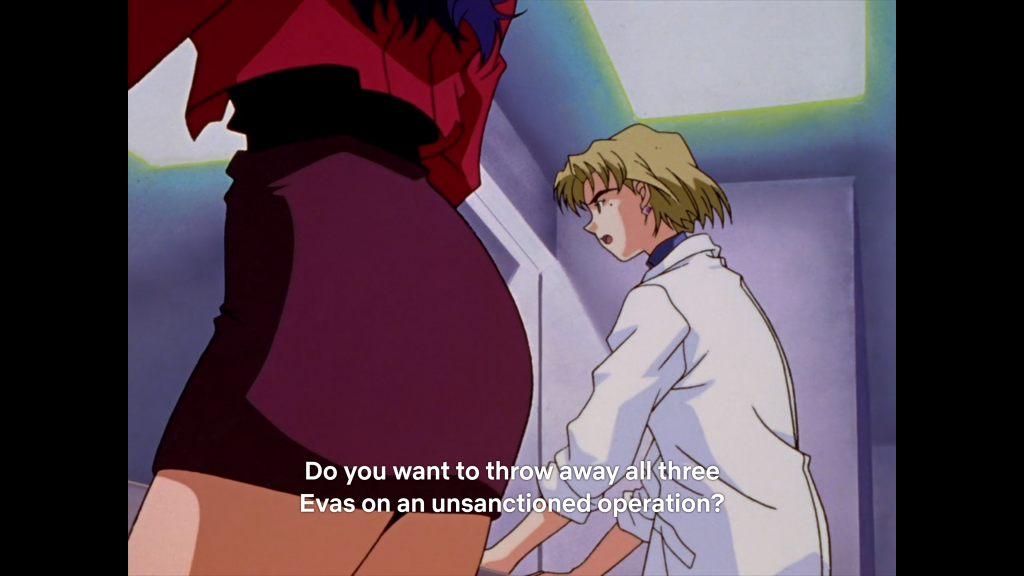 Why, Evangelion. Why are you the way you are?

Even if I didn’t know what was coming, this show isn’t the type to kill off its characters when its protracted thesis is a study in their suffering. So there is never really any tension to the episode. The only purpose to this story line is in showing the way everyone at NERV lies to everybody else.

When Misato briefs the kids on the mission, she does so with a smile on her face and unwavering confidence in her plan. The kids, in turn, refuse to fill out their wills in the face of a near suicidal mission. Asuka blusters that she doesn’t plan on dying. Rei says that a will is not necessary (though we know that’s a reminder that she has nothing to bequeath other than a busted pair of Gendo’s glasses).

[Retrospective note: It’s also such a slow play foreshadow on the fact that Rei isn’t a person so much as a “soulless” clone.]

And whatever fear Shinji might be feeling is effortlessly shoved into the back of his psyche. Misato then offers a steak dinner as a reward for completing a job so bonkers she refused to tell the kids the odds. Naturally, the kids are dutiful in their enthusiasm.

The episode reveals itself in the moment the kids go from smiling idiots to their true selves. 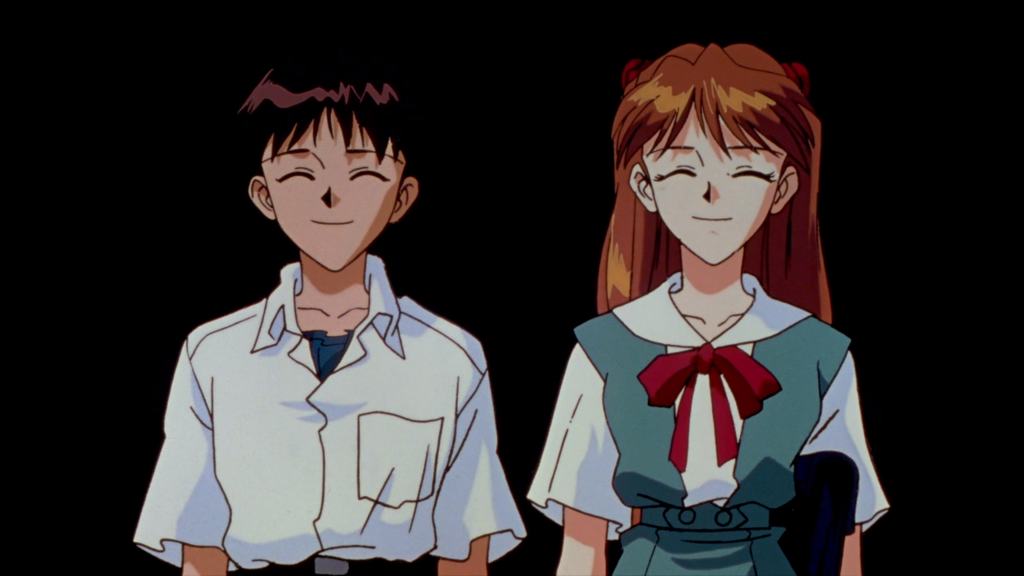 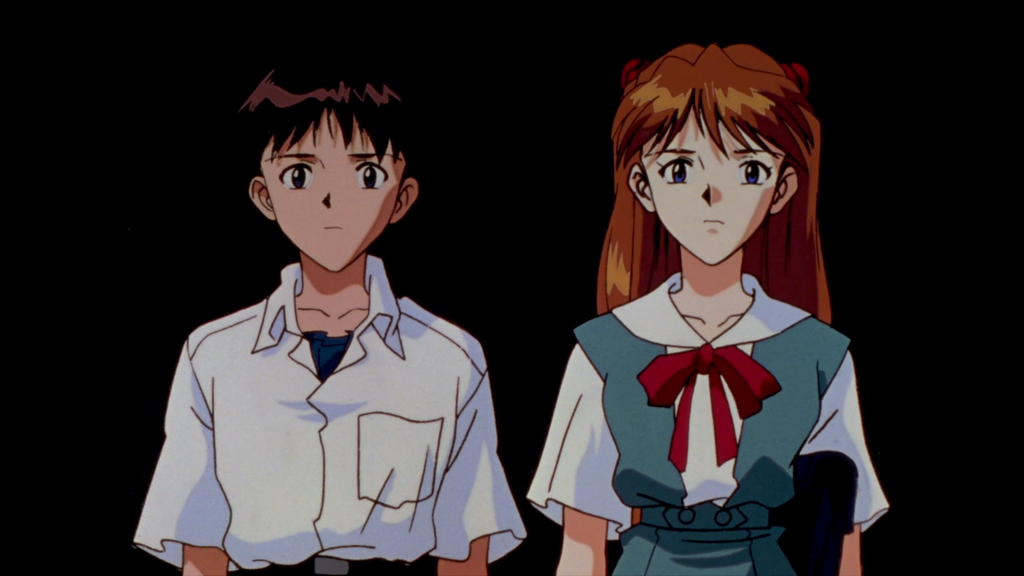 Asuka, who remains the world’s worst co-worker, tells Shinji that he was laying it on too thick with his “yay!” Shinji cuts right to the bone by saying that if his enthusiasm will make it easier for Misato to run the operation, then he’s going to give it to her. Welcome to NERV: everybody lies.

Yet this is where we start to see some of the nuance in the lying. Shinji and Misato lie to spare the other from the pain of their work: Misato will order Shinji to his death if the situation calls for it; Shinji will smile and obey because he’s been manipulated into loving her. Asuka lies to herself, and in doing so the world, because she feels that her only value is in piloting an Eva.

[Retrospective note: Welcome to capitalism, kid, where your only value is your job. Not that Evangelion comes anywhere near making that sort of a point. This is Hideki Anno subjecting us to his therapy sessions, after all.].

Gendo lies because he’s a Bond villain that wants to conquer the world under the aegis of saving it from the angels.

Even the scenes that are meant to convey normalcy show how the façade is beginning to crack. Aida and Suzuhara throw a party for Misato – because apparently it is totally normal for thirteen-year-olds to throw parties for women in their 30s – on the occasion of her promotion. The stupid up-beat at home with Shinji and Misato song plays as Misato phones in the effort of enjoying the spotlight. Shinji sits stone faced as Suzuhara, Aida, Asuka, and the class rep take to arguing with each other. The music plays on, like the relative at a family dinner who is desperate to defuse the tension, and Misato leans over to ask Shinji if he still has problems in social situations.

At least this episode offers some contrasts and shades between perpetual black and white of sad Shinji always being sad and party girl Misato always living like there is no tomorrow. The performative nature of these personae was something to be inferred in past episodes, particularly where the audience’s foreknowledge might be in play. In this episode, there’s an overt nature to the performances. The act might not be wearing on the characters’ souls quiet yet, but at the very least it is acknowledged as an put on.

This casts Shinji’s big get for the episode, praise from Gendo for his work piloting Eva-01, in a very interesting light. There are no visual clues that help to parse Gendo’s intent. The audience only sees the impact as the disembodied voice of Gendo Ikari tells his son he did a good job, and Shinji is rendered almost speechless. In the wake of being told “good job” from his father, all he can manage to stammer is a simple hai – a word Netflix brainlessly translates as “thanks” when it should be more accurately read as a “yes sir.”

Shinji’s relationship with his father, such as it is, is that of a military commander and a solider. His hai is all of his desire for parental approval running headlong into the day-to-day psyops required to keep him and Eva-01 viable military assets. So which Gendo was speaking? The father who is proud of his son? Or the Bond villain who will say and do anything to achieve his goals. There’s no point asking which Shinji we are seeing. Shinji the lonely son and Shinji the soldier are effectively one and the same in this moment.

In the past, I suspected Gendo the father was at hand. I wasn’t committed to seeing Gendo as the antagonist of this story. Time has changed that stance. Now I see a moment of kindness weaponized like everything else Gendo touches. Shinji’s admission at the ramen bar that he fights for his father’s approval is perhaps Evangelion’s greatest tragedy to date. If only Shinji could have stayed the steel eyed mecha man from so long ago.

So, what’s the value of a miracle? I suppose that depends on who is exploiting it.