Throwing “the cruel” in front of every episode title was never meant to be anything more than a bit that riffed on the theme song. Applied to this episode, one is left to consider who is the cruelest magma diver of them all: Asuka and her endless snipes and barbs, or the adults intent on manipulating her into an attack on the larval eighth angel? Welcome to children attacking children: the series. At least this episode is clearer cut than the previous one. 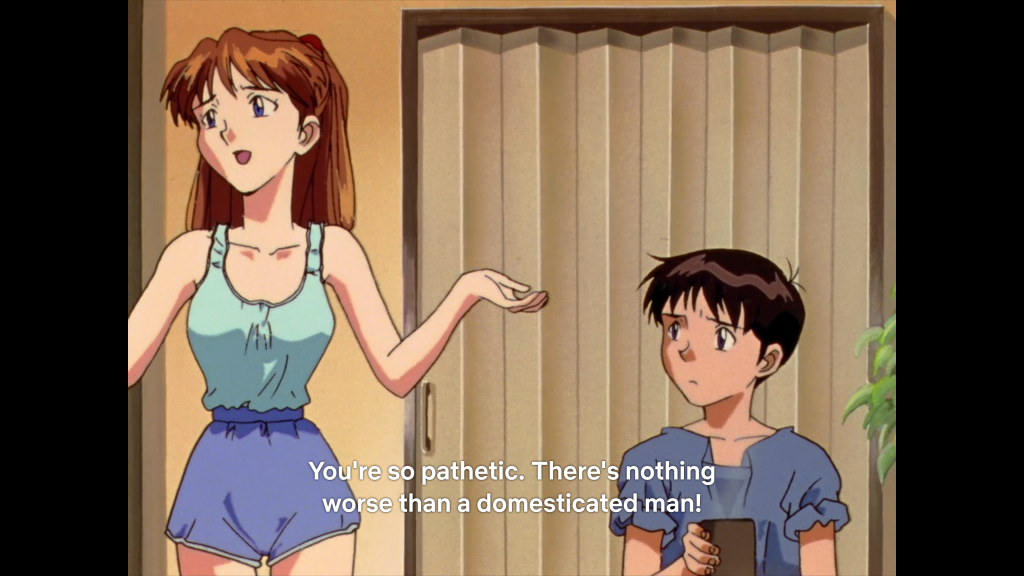 Open on Aida, Toji, and the rest of the eighth grade sideshow flying off to Okinawa for a school trip. Shinji, Rei, and Asuka have to stay on stand-by in Tokyo-3 in the event of an angel attack. The episode, itself, flows from a place of “drama” to action and then back to “drama” again. Let’s start the “drama” with a question: is Asuka trying to berate Shinji into fucking? The fact that I have to ask this question makes me feel profoundly creepy and explains the overuse of danger quotes. With that said, I am only working with the material at hand, and at some point Hideaki Anno must have asked himself that same question. He apparently decided that whatever all of this is, is more important than answering the initial query.

The episode features Asuka shopping for bathing suits with Kaji (because reasons). Then, while the team are hanging out at a NERV pool, she shows off her new bathing suit for Shinji (also creepy), who is sitting by the pool and doing his homework while staring at Rei (creepy intensifies). Asuka then leans over Shinji’s table, giving him an eyeful, while Shinji bangs on about thermal expansion (wait for it). The punchline to this creep sandwich is Asuka asking if her boobs might get bigger if they were warmed up (and there it is). Shinji says he wouldn’t know anything about that. Asuka then says Shinji is a complete bore and leaves him to his science.

*Retrospective note: Hello, Evangelion apologists. I’m waiting for you to explain the art to me. Do feel free to tell me how this is actually something sophisticated and deeply layered, and not a giant pile of uncomfortable horseshit. Because those parentheticals in the last paragraph, those were from Past-Adam, not me. He wrote those long before all 26 episodes of this series and The End of Evangelion made me bitter and weird.*

Is this an act of seduction from Asuka? Is this about power dynamics? Is she simply torturing Shinji because she’s bored?

*RN: These are not normal questions one should have to ask of a TV show featuring teenagers.*

There’s a temptation to see this sort of behaviour as what one would expect from an adult in a war story. On that level, Asuka is the soldier asking to feel something before she dies. At the same time, this is also the worst sort of anime fan service. I suppose one could argue that Evangelion is using anime cleavage as a tool to show internalized trauma masquerading as sexual bravado. It pairs nicely with the revelation that Asuka is a wunderkind who graduated from university in Germany before being forced to attend high school in Japan.

*RN: Yeah but that argument doesn’t work until a bunch of episodes later when we find out that Asuka’s mom had a psychotic break and her father started railing Asuka’s mom’s doctor. It’s putting the effect before the cause, and by the time we get to the cause, we may have forgot about the effect. The slow burn is too slow.*

One could certainly make that case that this antecedent to battle is an attempt at building sympathy for Asuka, but I don’t know that it lands. Since the action phase of the episode is 100% underwritten by adults manipulating children into battle, my gut reaction is not, “poor Asuka,” so much as it is marveling at the ice water running through Misato’s veins.

The eighth angel appears not as a rampaging monster but as a larva found inside a volcano. This puts NERV, which has been reactive to this point, on the offense. Asuka jumps at the chance to lead a high-profile strike mission, at least until she finds out she has to wear a bloated “plug suit” to protect herself from the heat. 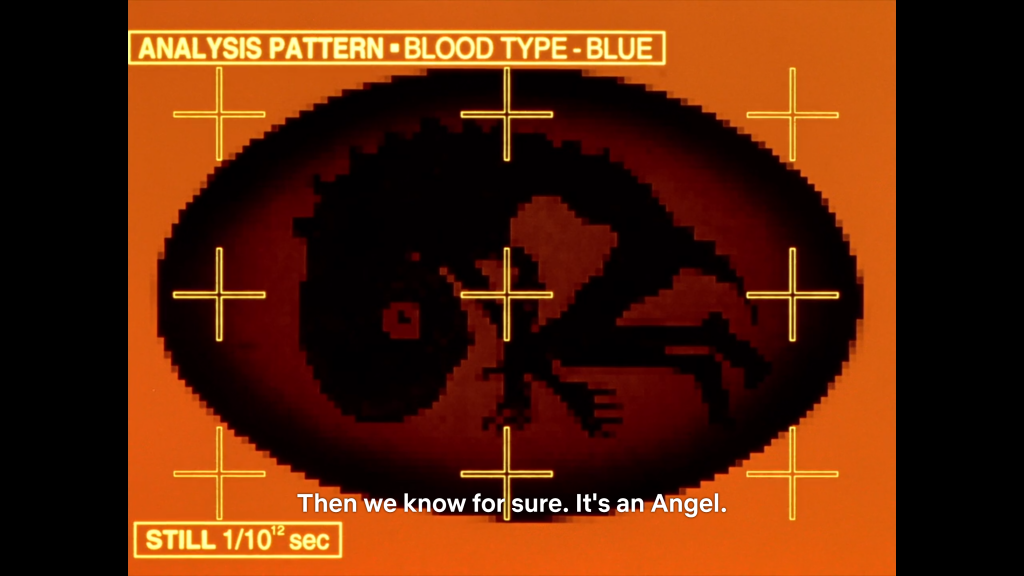 It is fascinating to see how vanity plays such a role in defining Asuka’s character. Everything about her is a performance designed to let her cling to the illusion of control over her life. This is how a stay-puff marshmallow man suit can become a bridge to far for her. Once that rubicon is crossed, only manipulation can get her into the robot. First, Kaji swaggers by and says he was looking forward to seeing her in action. Then, Rei’s offers to pilot Eva-02, and in doing so force Asuka to take on the mission, lest she lose face before Kaji.

The actual operation against Sandalphon is lifted out of every submarine movie in the history of cinema. In lieu of a surly captain, Misato orders Eva-02 past the magma suit’s crush depth. When NERV’s personnel point out that she’s not commanding a drone, that there is a real person in the suit, she orders the mission to move forward. And in that moment, there’s no difference between Gendo and Misato: the mission has to be more important than the children. Misato even has it in her to pivot to a pandering mom voice as she says that she’ll take Asuka to a hot spring after the mission. This is in such stark contrast to the steel-eyed woman who is unflinching in giving orders that are just as likely to kill Asuka as they are to capture the angel. The Magma Diver is elegant proof that everyone is manipulating everyone else in this series. Gendo might be the puppet master, but below him are other secondary masters who pull even more strings to execute Gendo’s will. This is not a healthy team. Then again, why should anybody expect the probable antagonists to be a functional squad? 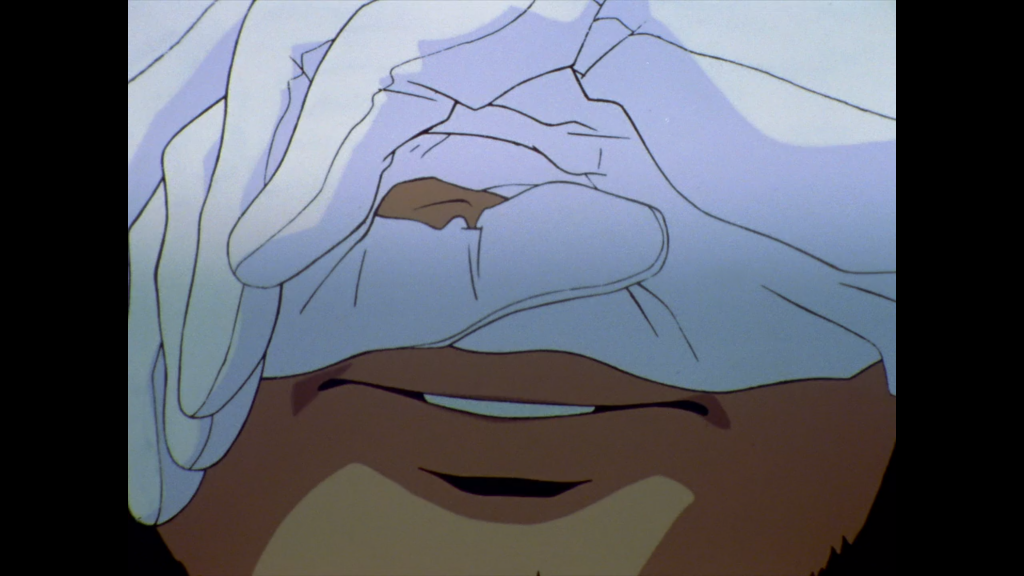 The aftermath of the otherwise unremarkable battle, one that shows how thermal contraction mentioned in the first act will be used as a weapon in the second act, returns to “drama”. Once again, I find myself at a loss for the many ways in which this writing gets in its own way. Misato does indeed take Shinji and Asuka to a hot spring. Therein, poor Shinji gets to hear the girls larking about on the women’s side of the sauna. Things take a turn for the absolutely weird when Misato starts commenting on Asuka’s supple skin, knowing full well that Shinji can hear all of this from his side of the sauna. The denouement is the Penguin – because of course a sentient bird is the straight man for this bit – staring at Shinji’s boner amid Asuka declaring that she’s ticklish.

*RN: Still waiting for the explanation of how this show is just so much smarter than anything else that was going on in the 90s. I don’t recall penguin dick jokes in Gundam Wing or Tekkaman Blade.*

In theory, the episode’s final scene – one of Asuka and Misato sitting naked on some rocks – is important to informing both of their back stories. Asuka stares at Misato’s chest and asks about a scar. Mistao goes on about the Second Impact. Asuka talks about her life before NERV. The nudity is meant to convey vulnerability, but when its antecedent is a literal teenage dick joke, it’s hard (shut up) to indulge the pivot.

At the very least, I get why Misato drinks. If my day job were ordering my surrogate children to death, I would crush a few brews before heading out to the office.

This, however, illustrates what I think is the challenge with Evangelion: it expects that the audience will keep reviewing its notes. Things that happen as a matter of course in episode two only make sense in episode ten. Yet individual episodes are constructed in such a way that their worst sins can hijack the greater narrative. Look at how much ink I spilled talking about pool time banter and penguins. I could have, and have in the past, taken the most direct reading of this episode and made a case for it being nothing more than an appeal to base fan service.

Even amid an effort to do better, I am still left contemplating if this series asks too much of the audience? Are its efforts to use anime against anime’s worst sins too subtle? At this point, I don’t have a solid answer. For the time being, there’s nothing for me to do but plod on and continue asking these questions.

Evangelion gets in its own way. That is probably the most succinct way of summarizing this show’s problems. It say smart things, but it undertakes those actions while running around with its trousers around its ankles. Is the audience really going to pay attention to the man spouting philosophy while his dick is flapping in the wind? Or are they going to run in the other direction from the naked, raving weirdo.]