Upon watching the first episode of The Last Kingdom, I can foresee the tediously outraged op-eds of two weeks hence.

It will not be pretty.

Because whatever sensible conversation we might have on rape depicted in a dramatic series, historical or otherwise – looking at you, Game of Thrones – is going to get hijacked by sophomoric oversimplifications that will further be reduced by readers as a slap fight between evil feminists who want to censor everything and dudebro MRAs screaming about how Obama is the cause of low testosterone in men.

Then, some third-year undergraduate at an Ivy League is going to use this discussion as justification for writing a letter to the Washington Post about how their history professor gave them PTSD by making them go to the reserve desk of the library. Instead of being a bellwether for farce, the letter will fuel another week of strawmen and ad-hom “think” pieces.

Ultimately, the dialogue that may have been possible with the first wave of op-eds will be drown out by a million tweets worth of this… 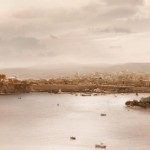