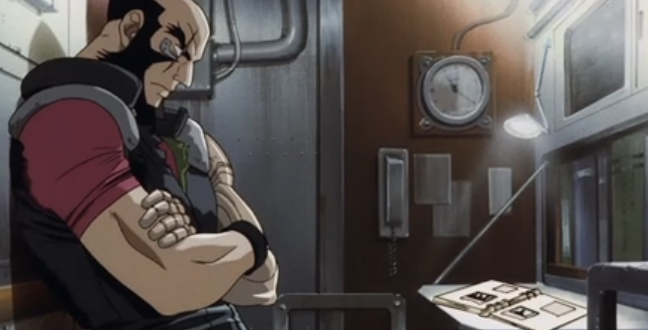 Black Dog Serenade presents as an interesting sort of puzzle. On first blush, I thought it to be a straight forward and generally okay episode of Cowboy Bebop. During my second screening, I saw the episode as a collection of tightly woven set pieces. They got me thinking about how this episode is nothing if not a rosetta stone for understanding some of the broader story elements at play in Cowboy Bebop. Why, then, am I not jumping for joy at an episode that has given me what I’ve been after since Gateway Shuffle? Because Black Dog Serenade is somehow less than the sum of its parts.

The only way this episode works is if the audience isn’t paying close attention to the through line that should connect the episode’s three main players: Jet, Fad, –  Jet’s old partner from the ISSP – and Udai Taxim – a former syndicate assassin that Jet “blames” for the loss of his arm. Those danger quotes begin to demonstrate why the mortar that should hold this episode together is actually something closer to sweaty play-doh in its consistency.

There’s too much action in the word “blame” for it to really describe Jet’s feelings toward Udai Taxim. Any easy permutation on “blame” as a verb still feels like it houses too much fire for the ever stoic Jet. When Fad first proposes that Jet join him in hunting down the hijacked prison transport shipping Taxim out to space jail on Pluto, he says that the statute of limitations has long since run out on avenging his arm. I struggle to imagine a more clinical and dispassionate way for a person to talk about a disability than comparing it to a case file that automatically closes itself. Jet doesn’t even bother to ask about possible bounties. He has no interest in Udai Taxim on either a personal or professional level. At least until he looks at a photo album. Because Cowboy Bebop is nothing if not a show where people are somehow both slaves to their past and, simultaneously, indifferent to their past.

At least Jet turning up to tilt at the windmills of his past life tracks with him being “the black dog that never lets go.” It’s a callback to the fact ISSP Detective Jet Black was something of a single-minded control freak – hence his ex-girlfriend dumping him as well as her general disgust at seeing his face on Ganymede in Ganymede Elegy.

However, the choice also calls the consistency of Jet’s character into question. Before Jet meets Fad on Ganymede, he endures some of Faye’s complaining about the broken showers on the Bebop. Her incessant prattle cajoles Jet into agreeing to fix the fixtures. Things take a turn when she asks him why he doesn’t get his arm fixed. She notes that the technology to regrow his arm is relatively inexpensive. This question brings forth some rarely seen steel in Jet. He looks Faye square in the eye and says, “This is my ship, and this is my arm.” It is a sensational mic drop moment. Only Jet Black can shut down the well-meaning discourse on “fixing” disabled people with a stare and a barb that amounts to “fuck you.” But if we consider the emotional and ethical strength of this scene, why should the audience be expected to buy into the plausibility of Fad somehow being able to tease Jet into going after Taxim?

It feels pale. The fabric of the story wears even thinner once a person starts considering all of the contrivances that happen to Jet aboard the prison ship. Jet corners Udai only to find out from the hitman that Fad is a dirty cop. On the orders of one of the Sol system’s syndicates, Fad put a sniper’s bullet through Jet’s shoulder. Apparently, the Black Dog wouldn’t stop running down syndicate activities on Ganymede. To hear Fad’s explanation, cops who cross the syndicates either quit the police or end up dead. Never mind the third option where you become a paid goon for the crime lords a la Fad; two options make for much more dramatic and menacing threats.

What none of these revelations or conversations explain is why Fad would go to all this trouble to bring Jet back into the police game over a prison ship that has no bounties on it and is out of Fad’s jurisdiction. If he wanted to finish the job he started when Jet was a cop, then he could have just shot him in the back of the head on Ganymede and shoved him into the ocean. They didn’t need to go all the way out to Europa, get involved in a space battle, kill a bunch of escaped convicts, and then have an ersatz gun fight.

Why ersatz? Because after killing a bunch of the escaped convicts (because it’s totally cool for cops and bounty hunters to carry out extra-judicial murder), Fad loads a single bullet into his revolver. He spends that bullet on shooting Taxim just before the assassin can settle accounts with Jet. That should be the end of things, but then Fad makes his confession and raises his pistol as if to shoot Jet. This leads to a showdown where Jet puts a round in his old partner to the click of Fad’s empty gun.

Perhaps we are meant to hear the episode’s serenade as a song of atonement. Is this a story about Fad finding some sort of redemption? Surely it would have been simpler to confess his sins in a bar on Ganymede. Fad could have spilled his shame over a drink before sliding his revolver across a table chipped and stained with the history of hook-ups, break-ups, and souls in various states of burden. Instead, we get this episode where the conflict is obtuse, at best, and the through line for the story is highly tenuous.

And yet, I don’t think we should write-off this episode. As a series, Cowboy Bebop is a patchwork of roughly hewn together micro-stories. These snippets might not tell the most complex conflicts, but they are evocative and detailed when it comes to shading the details of Cowboy Bebop’s setting. The set pieces of this episode reflect that trend toward detail over conflict on a micro level. There’s so much happening in the following examples, but also they are entirely disposable:

There is little to these individual scenes beyond adding detail from the margins, but they are so well done it is hard not to feel more connected to the setting, space, and characters. I’m torn between wanting to place this episode as a piece within a bigger puzzle, or accepting it as a mishmash of random nonsense and bad planning.

As the episode ends, we see Fad dead on the deck. While the ISSP is swarming the prison ship, Jet puts the former cop’s pistol back in dead hand and limps out of the scene. It is all very symbolic. Likewise, one might see Fad loading a single bullet into his gun before going to confront Taxim and Jet as the character saying, “this is the last thing I have to do.” As much as I heard that subtext, I also heard the echoes of Nobumoto and Watanabe smacking their foreheads and proclaiming that they really needed to do another Jet episode. Returning Fad’s gun to him is at once a gesture of respect and the final act of a forced story that doesn’t really track with the structure of the rest of the series even if the tone is in place.

So once again, Cowboy Bebop has managed to take a simple premise and twist it into something that presents as more complex than it appears. And because I’m clearly some sort of idiot, I’m putting aside my doubts that this is a shoddy one off and taking it on faith (because all the big bad things in this show involve churches) that all of the elements on display in this episode are playing toward a bigger game. On a unit level, this is not Bebop’s best offering. It has all of the elements of a strong episode, but they come together in such a way that knowledge of the series to this point undermines the premise of the episode. Simply put, Jet is not this dumb, and Bebop cops are not this smart.

But more important to the purpose of this review series (seeing what Cowboy Bebop has to teach its audience about good writing), I don’t know that this episode really respects its audience. It’s not pandering, but it’s also not engaging beyond a surface level. It’s showing people that backstory is somehow a replacement for conflict. Granted, this is very good backstory. At the same time, I shouldn’t care more about 10 seconds of Ed and Ein having a wonderful time watering plants than I do the actual conflict of the episode.

Perhaps the lesson here is that this episode is not only a Rosetta Stone to Bebop, but it’s also a master class in world building. Small set pieces can draw the audience into the story. The key to applying this lesson is in understanding that world building is only a part of the story. World building absent a conflict that tracks from A to B to C…is just Cowboy Bebop.

Revangelion: The Third Impact – An Introduction