Hey, you. Yeah, you over there. The guy (because of course) who still longs for the glory days of living with six other dudes as a second year undergraduate and spending your nights playing hacked ROMs of old SNES games on your buddy’s 32 inch tube TV. Have I got a show for you.

Castlevania is based on the video game franchise whose voice acting is typically much worse than you remember. It now comes to us courtesy of Netflix, Adi Shankar, the gentleman who thought that the Mighty Morphin’ Power Rangers needed a grimdark reboot, and a cabal of dudes who seem really angry at their fathers and want the world to know it. And gods help me, I kind of want a third season – or a second season if you don’t consider the not-quite-feature-length film that was cut into quarters a first season.

There’s nothing sophisticated or smart about Castlevania. The first season is so utterly disposable, such a neophyte’s insisted upon prologue, that it is aptly summarized in the first five minutes of the second season. All one needs to know is that in an alternate past, or maybe some sort of future-past, version of Europe there are vampires. The biggest, strongest, and smartest vampire is Vlad Tepes Dracula (Graham McTavish), and he would like to see the world burn because the Church burnt his wife as a witch. And if that man pain isn’t enough to make you see him as a tragic figure, there is a lot of sulking and Gendo posing to really spell it out. 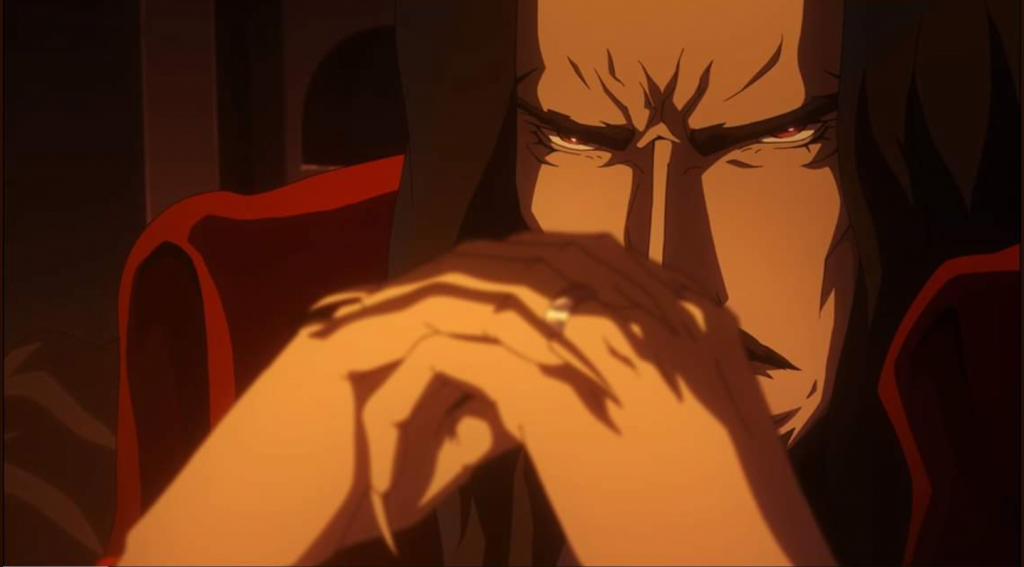 Ol’ Drac has a son called Alucard – because as a baby his mother knew he would be “Dracula’s mirror”. Al is a day walking half-vampire Adonis voiced by Gaius Baltar (James Callis), and he dresses like Jerry Seinfeld’s take on a pirate. Form an orderly queue, ladies. Naturally, Alucard is angry at his father to the point of wanting to kill Dracula, so he forms an alliance with Trevor Belmont (Richard Armitage) the last son of a disgraced and excommunicated family of vampire hunters, and Sypha Belandes (Alejandra Reynoso), a magic user and oral historian.

Together, Belmont and Alucard hurl insults and f-bombs at each other like teenagers who have just discovered their teacher is cool and won’t send them to the principal’s office for swearing. The dialogue is chilling in its mediocrity, as if it aspires to be the living shadow of angst and petulance engaged in an aggressive make-out session. And yet, it works just well enough to transmute the machismo into something that evokes the occasional laugh. There’s something very honest to Armitage’s and Callis’ maximum effort delivery of lines they took so they could put in a pool.

Bearing this in mind, one should not come to Castlevania if they are looking for a mile-a-minute action slash-up. The anti-Church guts and gore of infamous anime Berserk offers a much more action-focused catharsis. The questing inherent to Castlevania the video game takes such a back seat to snark and cheeky wordplay that it feels like an over-correction from a creative team. It is as if they feared their show would be branded as so much video game plop that they tried to turn Castlevania into a brooding CW Network drama. This was a misstep, because it is the Viking vampire Godbrand talking about how pig blood gives him the shits that evokes more eye rolls (and giggles, because I love me a good poop one-liner) from yours truly than anything found in the series action sequences.

In fact, the battle against Dracula that takes place in the second season’s penultimate episode is immaculate in its delivery. The fight between the heroes and Dracula’s minions is perpetually kinetic and accompanied by high-concept remixes of old 8-bit Castlevania chiptunes. The only problem is that amid all of the brooding, glowering, and vampire intrigue, the pacing took one too many shortcuts around the level bosses to get to the end of the story. Slaying Dracula shouldn’t be the culmination of the first act.

There is no better way to summarize Castlevania than through capturing an essential tableau of the series. Alucard and Belmont snipe about who has had a harder childhood while Sypha reads books, learns powerful magic, and shakes her head at her compatriots, wondering what she did in life to end up in this place. A viewer with Sypha’s patience will likely see past the preening of would-be auteurs that are desperate tell you how hard core they are, and find some charms to the series. Anyone else will wonder what else they could have done with three hours of their life. 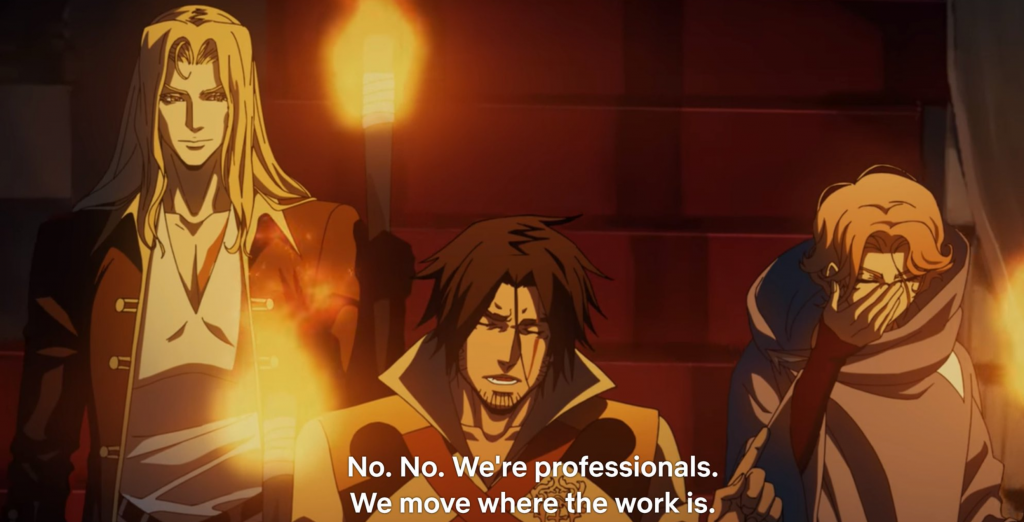 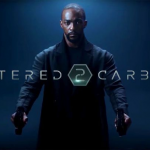