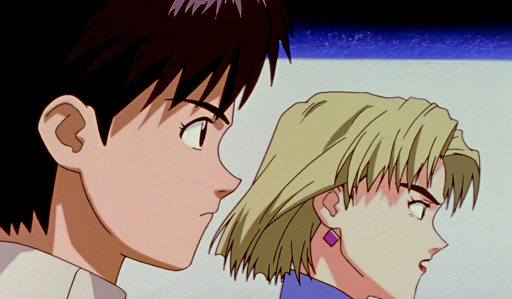 My original purpose in writing this series was to reflect on what feelings Evangelion evoked in me. I wanted to give myself the freedom to wander from one subtextual thread to another without getting caught up in plot summaries and the typical expectations of a review piece. I wanted to get past hot takes of good and bad, and try to get at something deeper. There are times when it seems like Evangelion is going out of its way to make that mandate harder than it needs to be. Because there’s no getting around the fact that Angel Infiltration is bad episode.

[Retrospective note: Ah, I see my past self is starting to catch up with me.]

Mind you, bad does not translate to unimportant. I suspect this is a distinction that I missed in the past. At present, I will say this might be one of the most important episodes of the series to date. A single line of dialogue from Gendo Ikari during the back half of this episode puts so much of the series into context. It’s a line that acts as a locus of intention for both the character and the series’ long arc.

But you don’t want a discourse on the man who would be Dr. No, at least not yet. You want to know who I think I am to suggest that anything to do with Evangelion is bad.

[RN: Fucking finally. Finally my past-self starts to show just an ounce of confidence in himself. He is no longer enthralled to the fear that people won’t like him if he says something mean about their sacred fucking cow. Good show, buddy. I’m very proud of you.]

And as such, I am eminently qualified to say that this episode has aged worse than a season one episode of Star Trek: The Next Generation. The first twelve minutes of this episode are entirely disposable because they deal with a 1990s interpretation of computer hacking. No good comes from a 90s imagining of computer hacking. I say this as a man who read the novelization of the 1995 “film” Hackers.

You think Star Trek has a lot of technobabble and jargon? I’ve seen jargon you people wouldn’t believe.

This episode keeps banging on about substandard construction in protein walls, contaminants infiltrating pipes, and infections spreading through dummy Eva bodies. Then the infection turns into a computer virus, I guess, which is actually an angel that starts hacking the Magi – the triad of networked AIs that run NERV and the Tokyo-3 Geofront. This is where things get serious. We know it’s serious because the writing throws around more 90s techno talk than a teenager running their first game of Shadowrun. In concept, I understood all of the words that Ritsuko and her tech team were bandying about, but I’ll be damned if the words assembled into anything meaningful. 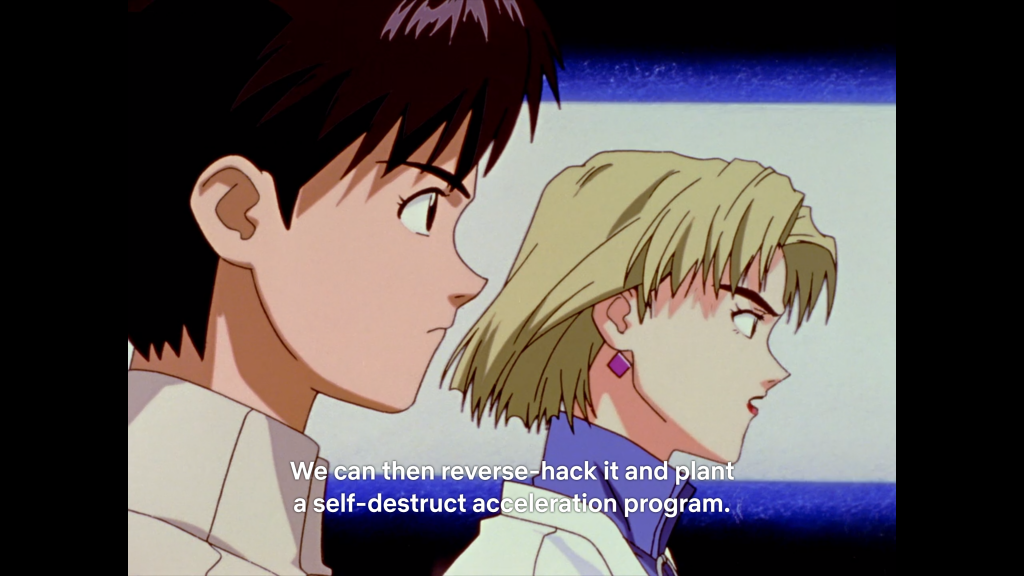 So let me save you a bunch of time and distill 12 minutes of whiff-whaff into three salient points.

Pay no attention to the potential implications of convincing an angel to co-exist with three supercomputers. The writing certainly seems content to drop this bomb amid so much exposition before getting on with its day. Rather than getting caught up in the details, because Evangelion clearly isn’t, let’s talk about Gendo Ikari.

The only reason to watch this episode, save for a vision of a super computer whose internal design fuses convoluted HVAC with ghoulish necromancy in a style befitting Terry Gilliam’s nightmares, is that Gendo tips his hand. After Ritsuko uses literal computer magic to halt the angel’s advance through the Magi, the adults of NERV gather for a quick strategy session. Where are the kids? Well, after stripping down to do a “how well can you pilot an EVA while naked test” their entry plugs were blasted up from the bowels of NERV HQ into a lake in the Geofront. Why were they naked? Don’t worry about it.

[Retrospective Note: they were naked because this show is all about giving the audience an opportunity for a leer. This self-evident genuflect to base fan service won’t stop many toddling intellects from writing manuscripts about vulnerability because of this scene.]

Also, Ritsuko’s mother uploaded her consciousness into the Magi, and Ritsuko both loves and hates her mother – just like Misato – just like Shinji. Well-adjusted people don’t work for NERV…or perhaps NERV breaks the well-adjusted. Though this revelation isn’t really important, either. It’s there in service of someone telling Hideki Anno that Ritsuko didn’t have much personality or depth to her character.

What’s important is that Misato and Ritsuko frame the angel as a fast evolving form of life. Gendo then weighs in, stating that the way to defeat the angel is to force it to evolve because, “the ultimate end of evolution is self-destruction.” 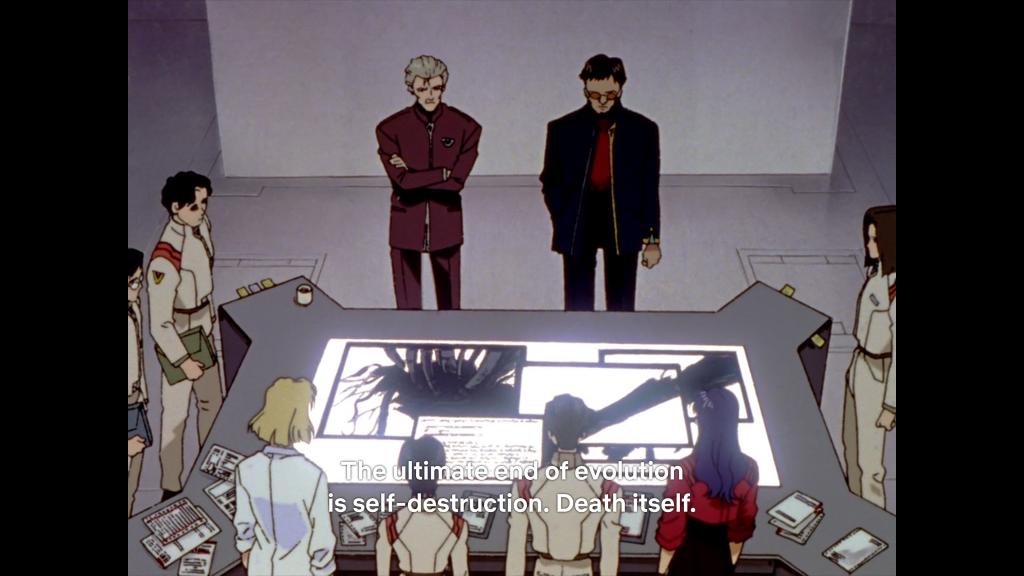 This is the moment when everything comes together. We know that Gendo and the colour coordinated council are working toward something called the Human Instrumentality Project. Thirteen episodes in, a first-timer still has no idea what this is. All they would know is that Gendo believes Instrumentality will save humanity. This requires reconciling evolution and science – both of which are touted as virtues within NERV’s hallowed halls – as Gendo’s twin enemies. He no doubt sees every step forward as one more movement toward entropy. Thus, Gendo must be working toward what he sees as an alternative to human evolution and its inevitable self-destruction.

Ergo, Instrumentality must be a step backwards.

With the benefit of foreknowledge (either from this series or from the one time I watched The End of Evangelion) I know the Human Instrumentality Project is a plan to remove the AT Fields that make humans unique beings and reduce all of us to a gestalt of LCL. There is no reason for anybody else to get this as important at this point in the series, though. That’s the trouble.

Setting aside that knowledge, the arrogance in Gendo’s world view, that evolution only leads to annihilation, is unmistakably dissonant from the people around him. He offers people like Ritsuko the ability to understand herself (and her mother because she is a computer now) through the very science that would eventually destroy humanity. Likewise, Gendo sold Misato and Shinji on a plan to use the Evas to destroy the angels and give humanity some hope for the future. Yet he readily admits that the future is fundamentally pointless. Even without knowing what comes next, the episode exposes Gendo as having a very deep, very complex agenda.

How in the hell did I ever twist myself into seeing Gendo as anything other than this series’ antagonist? He’s exactly one speech about “saving humanity from itself” away from being Ra’s al Ghul. If it weren’t for the fact that NERV was government funded and Gendo lacks a personality beyond “enigmatic asshole” it might be fair to compare him to the likes of Adrian Veldt.

What part of me saw him serving some greater good? Was it the part of me that was fixated on proving to myself that I wasn’t like Shinji? Was undergrad-Adam’s self-loathing so palpable that he latched on to the series’ antagonist because he presented as being in control and reasonably square with himself?

Evangelion: where one is never sure if making it about one’s self is a feature or a bug.

It is fascinating to see the duality of my twin selves collapsing into a single unified field. I don’t know that there’s more that needs to be said of this episode. Gendo fears humanity’s self-annihilation. Shinji is afraid everyone will hurt him. The kid is a perfect avatar for his father’s plans to arrest forward motion through abrupt and ultimate regression.

A good story would start dealing with that conflict at this point in the series. If the end point of Evangelion is Shinji rolling the dice on humanity to applause and congratulations, then the second half of the story should be the gradual build toward that moment. We all know that’s not going to happen. The writing is going to slap itself on the back for continually doubling down on events that should break Shinji’s psyche beyond the point of recovery. It’s further going to admire the problem of Gendo and Shinji being opposite sides of the same coin until it is literally too late to resolve the story through anything other than incoherent magic.

Past-Adam saw that coming, and correctly identified this episode as a critical juncture in the story.

Hideki Anno is not the only one who knows how to be self-congratulatory. At least I’m honest when I do it.