Hello again. Present-Adam is here to grace the top of the page. Once again, I’m going to let my past self run – mostly – without interruption. By this point in the process he and I were pretty much becoming one entity. See you at the end of the post for my two cents.

I’ve lost count of the number of times I’ve said Evangelion gets in its own way. Some part of me wants to do a CTRL-F through the Word document that houses this series, count said number, and drop the mic on this post. Yet here I am, after an episode that pretenses at being both emotionally and narratively poignant, still contemplating what the hell it is that this series wants from me.

So let’s go back to writer’s craft 101, and look at some of Evangelion’s constituent parts to try and understand what has brought us to this point.

It is an incoherent, asynchronous, Gordian knot told through a half-dozen inherently unreliable perspectives. Moreover, every character in this story is compromised, or traumatized, by their proximity to Gendo Ikari. So the only perspective that might make any cohesive sense is that of the series’ antagonist, and he is kept perpetually enigmatic and aloof from the events that he, himself, is engineering.

Bearing that in mind, we must consider that plot, alone, does not a story make. This is the reason why I roll my eyes at people who scream about spoilers. If plot surprises house a story’s only value, then I submit the story is a middling experience. So perhaps we need to look at Evangelion in terms of theme.

The most obvious thematic readings should center on religious mysticism and emotional trauma. There is no shortage of Judeo-Christian ephemera peppered throughout Evangelion. This particular episode shows off an Evangelion graveyard in the shape of Tree of Life, as per Kabbalah via sensei google. Here is my only-somewhat-rhetorical question on that point: what is an overarching theme of “religious stuff” trying to say to the audience?

I’m not qualified to speak on deep mystical readings, and efforts to do the work on that front have led to no shortage of dubious YouTube videos on tarot and the illuminati, fans on Tumblr shouting in esoterica, and various undergraduate theses on divinity. I’m not here for that, and if you’ve stuck with me this far, gentle reader, neither are you. Thus, I would ask what the audience is meant to take from exploding crosses, discourses on man making cities in the image of gods (or some such bullshit), trees of life, eyes of Ra, Marduk Institutes, and all the rest, on a very fundamental level? Is there a value statement on religion as something that inherently good or bad? Are we meant to see this as a retelling of a creation myth? Honestly, I don’t know. For all the side-conversations and diversions into navel gazing that bloat this story, I can not tell where Evangelion stands on religion beyond the notion that some people (e.g. Gendo) will use the idea of prophecy for their own ends. Also, religion sure is a thing.

Likewise, and I know I’m going to chap some asses with this one, I’m not sure if there is anything of particular depth when it comes to the idea of trauma and grief as a theme in Evangelion. All of the misery in both this episode and this series can be traced back to the fact that Gendo Ikari is essentially a Bond villain. Gendo manipulates everyone, and, in turn, everyone suffers for it. That’s not really a theme, though. It is a consequence of a character’s actions. And it is barely a plot device since the response to trauma from almost every character is to compartmentalize and carry on. Arguably, Shinji’s traumas are going to lead to the Human Instrumentality Project; that is a plot device.

When past-Adam is wrong, he commits to being wrong.

Make no mistake, trauma and sadness are perfectly valid themes. My argument here is that Evangelion’s refusal to explore anything in a textual fashion makes them weakly implied themes in this single context.

Consider Rei’s “death” in this episode as another case study in a theme that fails to launch. First and foremost Rei’s death is a fake out. When Rei dies in the episode – for all of three minutes before Gendo and Fuyutsuki resurrect her using the brainalizer – it leaves Shinji a traumatized mess. He tells Misato that he is sad, but that the tears won’t come. When Misato, Shinji’s surrogate mother/boss/mom crush, so much as touches Shinji’s hand, the kid recoils in horror. This is not trauma as a theme. This is trauma as a motif. This is something meant to evoke an emotional response in the character and audience.

It’s not saying anything in particular to the audience, so much as it is establishing a mood. It may be showing us that Shinji is traumatized from Rei’s death, but it’s not saying anything about trauma other than “Don’t have a dad who literally wants to use giant robot/soulless engineered human monstrosities to conquer the world…or turn the world into soup…or some other weird sort of misplaced Gen X anti-establishment bullshit.” It might also be saying something about the horrors of child birth given the way Rei’s Eva takes a turn for maternal body horror. But who has the time for that?

Misato’s attempts, or lack thereof, to comfort Shinji could be a discussion on bystanding/caregiving. After being rejected by Shinji and subsequently being rejected by her pet penguin, Misato ponders on if her desire to comfort Shinji was actually a selfish need for someone to validate her. This is a rather profound moment of self-reflection from this character. Yet there’s no commitment to it from the rest of the writing. The story, in true Evangelion fashion, has Misato put a bracket around the trauma and carry on with a literal deep dive into NERV’s bowels. This is why I have trouble with “trauma” as a theme in Evangelion. Themes require some sort of examination, reflection, and statement to be worth my time.

In lieu of exploring a theme, the episode seems much more preoccupied with explaining to the audience that Rei is a clone, possibly an alien, and that the dummy plug system emerged from using Rei clones and the Brainalizer. Also, it is apparently important that Ritsuko followed in her mom’s footsteps and either had a thing with or lusted after a thing with Gendo Ikari.

Look at that, we are back to the recurring motif, if not a full-blown theme, that Gendo makes people miserable. Misato, on seeing a crying Ritsuko, weeping over the affection she held for Gendo, speculates that sadness is what comes to all people obsessed with Evangelions. So, is that the theme? Obsession leads to sadness? Or is it that sadness comes to people who work for Gendo Ikari/Hideki Anno’s dad.

The gradual erosion of things that seemed obvious at the start of the series into a slurry of mixed imagery and half-baked ideas has made me cold to these characters, their problems, and whatever deeper point the story might be working toward. When Hideki Anno says that Evangelion can mean whatever the audience wants it to mean, I’m the rat bastard who sees such an attempt at universality as a lack of ambition that renders much of this particular enterprise meaningless.

I want there to be more to this series than “sad people are sad,” or that traumatized people have to put aside their pain in service of the people who hurt them. That is not a new theme.

Even in the 90s – even in 90s anime – that is an extant idea. Gundam Wing came out in the same year as Evangelion and it offered no shortage of series spanning arcs that explored how the Gundam pilots – all teenagers – were manipulated, traumatized, and weaponized by the colonies against the Earth Sphere Alliance.

If there’s more to this, then I’m not seeing it and it is not for a want of trying. The series is affective – no arguments there. I see elements of myself in some of the characters, but that familiarity declined with each passing episode. The writing’s endless emotional flaying pushed the characters from relatability. At this point they are little more than punching bags in service of the mystery box.

A note from a version of me who has finished watching the entirety of the series, for a third and final time, and is now free to connect the dots that past-Adam could not quite see:

My past-self really ran out of steam on this one. I can’t say as I blame him, either. There’s only so long you can beat your head against an insoluble problem before the sanity points start to run thin.

One of the points he alluded to, but didn’t flesh out, strikes as particularly relevant from the retrospective position: that of characterization within the story. Evangelion’s characters are changeable in a way that creates doubt in the relationship between the audience and the text.

I bought into the idea of Shinji as a child soldier in the early episodes because there was an arc to Shinji that led in that direction. Yet that structure is abandoned as the story brings in more of its slice-of-life elements. Shinji the steeley-eyed mecha man vanishes. What remains is a creature of petulance and mood swings. This makes Shinji very much a teenager, to be sure. Yet the transformation yields a character so driven by an author’s efforts to create a world of internal, but ultimately inaccessible, narrative that all of his actions become alienating. Alienating, at least, to the non-believer.

Someone who embraces the dogma of Evangelion accepts the nature of Shinji and the others without question or consideration. For all of the Catholic trappings to this story, it has a protestant tendency toward presuming that a personal relationship with the text and its truth is the end goal. The inner truth, so the dogma would argue, is the only one that matters so long as one believes. That’s well and good for those so inclined to have faith in Evangelion, but I’m an art critic. If a text asks me to believe in it, my job is to shrug and say ‘make me.’

For a few episodes, Evangelion was doing the work in response to that challenge.

By the third act it is all so much back peddling and chaos as the story collapses under its own weight. 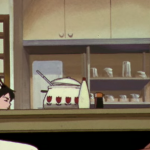