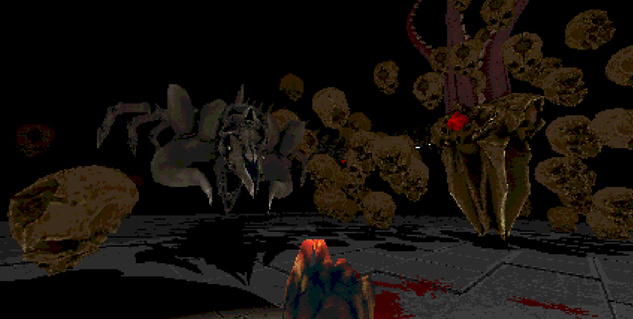 The arena is an island of cold rock, lit from above but hemmed in on all sides by darkness. What exists beyond the shadows? Only terrors.

Terrors with the power to pierce the veil and ladle the pain of your inevitable demise to thirsty, greater evils. Is there an exit other than death? The dagger, glowing in front of you, holds the answer.

Eldritch steel and mortal flesh fuse as your fingers wrap around the dagger’s handle. Infernal energy radiates a cold, faint hope on to the stones below. You are become death: an endless stream of entropy. In the realm of men, you could destroy nations and rend civilization. Here, in the arena, your power is a trifle. It is an exercise to heat your blood and season your meat with the spices of adrenaline, fear, panic, and despair.

There is a chittering of bone on stone. It begins.

The monolithic deathheads emerge. Four visions of desiccation joined into a single nightmare. Their hoods are molecule sharp. Stretching to the ground, supporting the lumbering engine of death, they form an eight-pointed vertex. Tentacles undulate upward from each skull. The antediluvian arms, massive, heaving, atrophied but alive, praise their dark lords as the monstrosity slowly rotates. A quarter turn and it groans, ejaculating the skulls of a thousand gladiators that came before you; the swarm is born.

One, ten, dozens, hundreds of daggers fly from your fingertips. Using the weapon comes as naturally as breathing. Skulls crack, falling to the stone, dissolving into dust. The remainder track you, slow and relentless. And then, more chittering, behind you this time. Another deathhead host emerges from the pitch, and its children hunger for you.

Devil Daggers is an exceptional game. Its simple premise and nostalgia-evoking graphics only accentuate an experience that is the perfect fusion of simplicity and brutality. Pick up the eponymous Devil Dagger, fight the endless legions of Hell, survive for as long as possible, and then die.

A talented player will last for all of forty-five seconds before this escalating challenge in spatial awareness breaks them upon the wheel. Stop moving in the arena? Die. Get overly confident? Die. Feint when you should charge? Die. Charge when you backpedal? Die. Fail to upgrade your Devil Dagger with the game’s one and only upgrade? Die.

Life is short, and death is inevitable. So why bother? Why bother with a game that makes the most quarter grubbing arcade cabinets of the 1980s seem kind and merciful by comparison? For a chance to pass The Excalibur Test.

In 1984 a movie called The Last Starfighter featured a seemingly impossible video game called Starfighter. This was no ordinary game. Starfighter was a recruiting tool, a way of testing humanity to see if any among us had the singular skills to join an interstellar version of the French Foreign Legion. Only the aspirant horror writer in me thinks that Devil Daggers is a way for the denizens of Hell to evaluate a mortal’s worth to lead their legions. However, the chance at being the chosen one, the person who pulls the sword from the stone, is what gives Devil Daggers so much of its appeal.

There are no “points” in Devil Daggers. A high score is measured by how long a player can survive. The game’s single Steam achievement dares players to endure for five-hundred seconds. Yours truly has managed the not unremarkable feat of surviving for 139 seconds. That places me well into the top quintile of people who have taken on the challenge of the arena. I doubt I’ll ever break two-hundred. As a thirty-four year old, my reflexes have likely decayed to a point where I won’t have what it takes to survive the game’s frantic pace at the three or four-hundred second mark. Still, a kernel of hope runs through Devil Daggers. Each fresh run through the game offers a new chance to pass the Excalibur test and become the chosen one.

To truly understand why this promise is intoxicating, a skeptic need only consider the quintessential axiom of post-Gen X ennui and anger: Fight Club’s immortal line, “you are not a special snowflake.” How long would it take to find someone on Facebook or Twitter opining these words, their snark bloated with righteous indignation? Devil Daggers is a five-dollar video game that offers a symbolic refutation of that fatalism. For all its brutality, the game teases a chance to feel special. It’s not simply built on the pixels and polygons of yore, but on the lure of being chosen. And with more than 35,000 people on the game’s leaderboard, Hell’s audience has no short supply of fodder chasing the intangible promise of being the one.

Ultimately, Devil Daggers is not simply a forum for reveling in the aesthetics of first person shooters in the 90s. It’s a reminder of a time when it was okay to cultivate the hope of being special, even if the world is going to crush you under the weight of its unstoppable onslaught.