*retrospective note: I guess I wasn’t quite ready to give in to the dark side. Gods I am a stubborn creature. It’s okay, six-months-ago-Adam, you can say it: the show sucks. The big emotional beats are manipulative. Hideki Anno is as manipulative as Gendo Ikari. Say it, my son, you’ll feel better about everything. You’re so desperately trying to be Captain Pike when maybe this situation calls for a little more Cayde-6.*

This is the episode where I entertain the notion that I have been too hard on my past-self. Sure, recent-Adam and young-Adam were kind of not in the right place to get the big emotional notes of what Evangelion is doing. However, I think both of those idiots can be forgiven for getting a bit lost along the way. Case in point: is the audience going to lock on to the toxic relationship between Shinji and Asuka when they are engaged in a matching leotard Dance Dance Revolution training montage?

Granted, mixed doubles DDR only happens in two scenes, so perhaps it is incumbent on the person taking a critical eye to Evangelion to do the work of seeing past a gimmick. Right then, let’s see past it…so, there’s this part when the penguin and Shinji really have to pee and Asuka is taking too long in the bathroom. Damn it. I couldn’t see past it.

*RN: Yes, that’s it. Strip away the pretense. See things for what they are.*

I’m struggling here because this episode also does a disservice to NERV’s working stiffs, who to this point have been reasonably professional. There’s no shortage of symbolism when Shinji and Asuka are not simply beaten by Israfel, the seventh angel, but are turned upside down and slammed hip deep into holes of shame. It’s a rout so complete that the UN takes command of the situation and drops a nuke on the angel. I’ll say that again, slowly: the UN nukes Japan – for a second time in this series – and the reaction from NERV’s senior staff is to mutter about the map having to get redrawn. 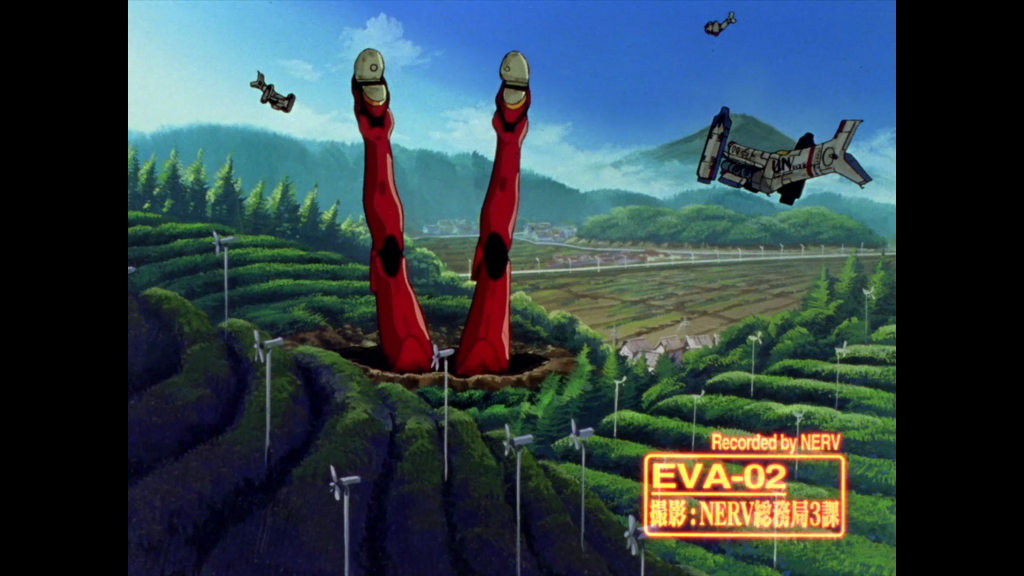 *RN: Technically, N2 mines are “non-nuclear” hence the name. However, I had to learn that on Wikipedia, and the imagery of the N2 mine is about as nuclear as one can get.*

I get the series’ internal history has half the world drowning due to climate change following the Second Impact. This means it is tonally correct for there to be a certain level of shikata ga nai mentality in observing a nuclear strike on an angel. Yet the gravity of this moment can come off as a throwaway amid Kaji and Deputy Commander Fuyutsuki bemoaning how NERV’s teenage pilots are making the organization look bad. If nuclear strikes are going to get overshadowed by extended shots of ass-end-up Eva units, then maybe I can be forgiven for thinking that this series is more frivolous than serious.

The defeat, complete with stacks of damage and expense claims filed against NERV, frames the primary conflict for the rest of the episode. Since Israfel can split into two beings, Shinji and Asuka need to get in perfect sync with each other to deliver a coordinated strike on the angel. Sounds pretty serious, right? It is…right until the episode pivots from Misato working through paperwork to Asuka moving in with Shinji and Misato.

Once again, we’re in a place where the levity is at odds with Shinji and Asuka’s tormented souls. The very first thing Asuka does as a roommate is unload boxes upon boxes of crap into Shinji’s room. There’s a symbolic defrocking as the “Shinji’s room” sign that Misato hung way back in episode two is thrown in a box and left in the hallway with the rest of Shinji’s meagre possessions. Behold Shinji the disposable person.

Except, I think I’m reading more into the symbolism than the episode is willing to put on screen. Whatever trauma Shinji might be processing takes a back seat to goofing about with Toji, Aida, and the class president. When all three show up at Casa Misato and see Shinji and Asuka in their matching DDR outfits, they all fly into fits of apoplexy. At one point Toji calls Shinji a traitor. Yet it only takes a single narrative beat for Misato smooth things over. She explains that the outfits are for a mission and everybody is back to laughing and having a good time. 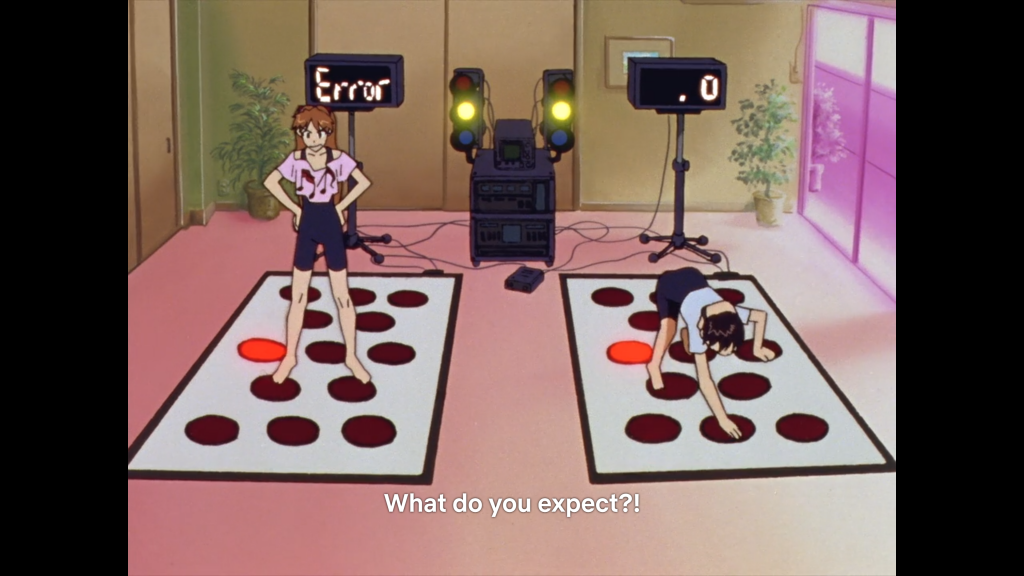 Meanwhile, at NERV HQ things have turned into a proper soap opera for the adults. In the span of about ten minutes, Misato goes from, “I hate Kaji so much and being in a relationship with him was the worst mistake of my life” to having a make out and aggressive grope with him in one of NERV’s elevators.

Also, recall that all of these shenanigans are possible due to NERV having its decisive weapons tossed ass-over-tea kettle across Japan as an antecedent to another WMD getting dropped on Japan. Pivot back to the kids and the camera is having a good leer at Asuka’s cleavage as she says her life is meaningless if she can’t be an Eva pilot.

Dear gods how I am nearly a thousand words deep on this review, and only now I’m talking about the camera’s literal and figurative gazing at Asuka? This episode opens on Aida and Toji giving a voiceover to a telephoto lens following Asuka around school and taking pictures of her in various activities and states of near-undress. Pan back to reveal Aida and Toji selling prints of their photos, with particular attention drawn to the more creepy, and naturally more expensive, shots. Figurative money shots, if you will.

Skip ahead to Asuka larking about Casa Misato with the camera locked on to her cleavage. It is supposed to be another reminder that Asuka compensates for her fear through bravado and aggressive use of sexuality. At the very least, the episode shows us that this is a put on when Asuka sleepwalks to Shinji and begins calling out for her mommy. Which then brings us to Shinji attempting to kiss Asuka after she collapses next to him.

What the hell am I supposed to do with this moment – a moment that is probably more decisive than the 62 second battle between Eva-01, Eva-02, and the seventh angel?

Is it utterly creepy, because Shinji is making a run at a sleeping woman teenager? Yup.

Was something like this to be expected, perhaps even forgiven in terms of Shinji’s actions, since Misato made thirteen-year-olds live together, eat together, sleep together, and train together? Ehhhh.

Does the act show how isolated Shinji is from the world that he can somehow alchemize Asuka’s abuse into an invitation for affection amid a moment of vulnerability? Well, somewhat.

*RN: Oh come off it, past-Adam. No, it does not. You don’t need to shovel this shit into a pleasing pattern for the sake of appeasing Evangelion apologists.*

Was it the best way to show the collapse of Asuka’s bravado and the extent of Shinji’s alienation? I don’t think so.

If there’s one thing this episode does, it is show the extent to which Evangelion can get in its own way. It plants the seeds of how the rest of the series will traumatize Shinji and Asuka, but it waters those seeds with all the nuance of a dude in a toga upending a beer keg. That is to say, one part of the series is subtle and nuanced, the other is John Belushi. How is anyone to be blamed for paying more attention to the leering, groping, weirdness? 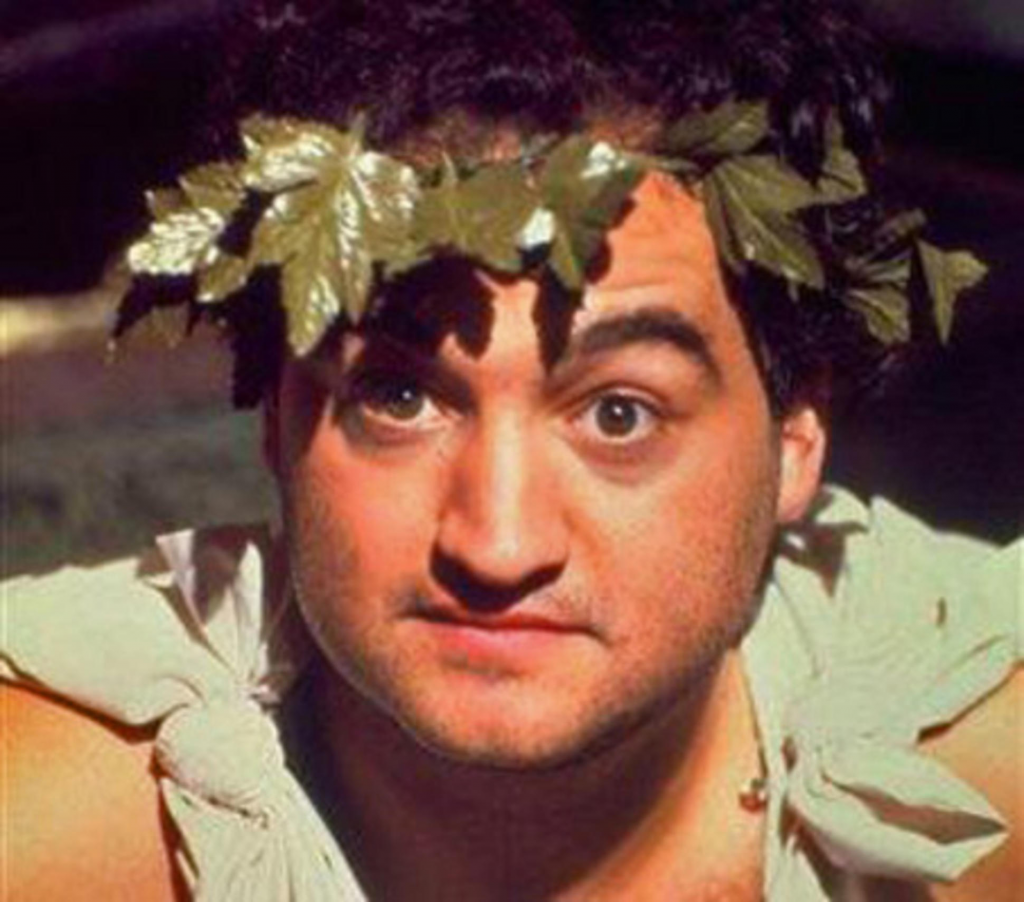 All the same, it’s too reductive to call this episode a write-off. Perhaps this episode is a herald of the show’s changing acts. In Act 1 NERV was a vehicle for competent super-villainy. Now, in Act 2, NERV begins a slow decline and collapse. Heralds, however, are supposed to be clear in their messages. And if this episode is a herald of things to come, then it is signaling a mess of trauma wrapped around pratfalls and inappropriate touching. I see what the series is trying to do; at the same time, these two approaches are not compatible.

Past-Adam really needed to take off the kid gloves. Because he was right about one thing – this episode does herald everything that comes next. The balance of Evangelion is a disjointed mix of wish fulfillment, demands to be seen, and sexual weirdness. If I live to be 103, I will never forget how hard I laughed during one of the inner-madness scenes where Misato and Kaji’s fucking is symbolized by Shinji glowering at a train going into a tunnel.

As I said, John Belushi.

Certainly, one is not wrong to say there is a lot going on under Evangelion’s surface. The same, however, could be said about a bog. Do you want to wade about in a bog? I don’t. Whatever hidden world I might find in the depths of a bog doesn’t change the fact that one is still in a bog, mucking about for meaning and asking the question, “Is what I’m looking for really worth all of this?”

At least the next episode is pretty good. Small miracles and all that.]