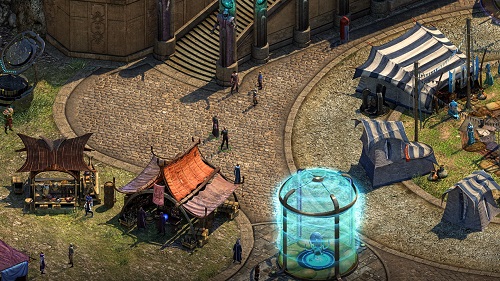 So how is looking for houses on your vacation going, Adam?

Shut up. That’s how. I’m on vacation, and I felt like playing some video games.

Steam tells me I’ve spent ten hours with Torment: Tides of Numenera. In case you weren’t paying attention to its 10,000 year-long dev cycle, this game is the spiritual successor to Planescape: Torment, which is a game decidedly not called, “Planetscape.” Don’t ever call Planescape, Planetscape. You’ll get such a telling off from Twitter.

So yes, it’s a CRPG with heavy narrative elements and the ability to discover a world of choices where the smallest details can have the largest consequences. Right, fine, we’ve heard it all before. And thus far Numenera seems to be doing a decent job of pushing all the buttons one would expect from a game whose ethos is rooted in the mid-to-late 90s. I’ll put a pin in the much more interesting question of if such a volume of “content” – I swear to Gozer I’ve read at least a novel’s worth of dialogue, narration, and general RPG fluff – is as effective as the more incisive and evocative storytelling of something like Sunless Sea. Instead, I’ll ask this question: does anybody else feel like Numenera has done more than borrow the engine from Pillars of Eternity? Also, don’t think I don’t have questions about how a game that raised shit tonnes in crowd funding before PoE was even announced somehow ended up using another game’s engine.

I get that both games are grown from Memberberries planted in the narrative shadows of Mass Effect and The Witcher, but both the conflict and protagonist of Numenera remind me of the approach Pillars took to building its world.

But Adam, Pillars is fantasy and this is science-fantasy.

Don’t you think I know that? I’m not saying that one game ripped the other off or that I can’t tell the difference between genres. The aesthetics are obviously different and Pillars seemed a hell of a lot more invested in letting me have a good time hacking and slashing my way through my problems. Still, a protagonist who can see into the souls of certain special people and a protagonist who taps into the gestalt (or maybe it’s a genetic memory) of an unspecified, but kingly, number of special people strikes some similar tones. It’s like reading The Running Man and then reading Battle Royale. Obviously they are different things, but they are also closely related to each other. At this point, I’m not sure if the deja vu is anything more than skin deep.

Nor am I convinced that all this world building is moving toward any sort of conflict I’m going to give a crap about. I have, however, been wrong about these things before, so I’ll reserve final judgement for later.