It’s Sunday morning, and I have finished watching the first season of Voltron: Legendary Defender.

First, I have to walk back an initial comment on how the show should do better in terms of representation. At a glance, it does look like five white dudes piloting the robot lions with Princess Allura left on the margins. It’s not. Shiro and Hunk are both people of colour of some fashion, and Pidge is a actually a woman. Allura, herself, is also a person of colour. So in terms of representing the world as we would like it seen in 2016, VLD is doing a fair job.

Second, the moment I got past the theme song being “wrong” and realized, “no, the theme song is fine. This Voltron isn’t meant to pander to your demand for nostalgia,” is the moment I really started enjoying the show. That took all of two episodes. Sure, VLD is a children’s show, but it is surprisingly well written. In fact, it’s better written than the original series, by far. It has a bit more of a hard edge than The Last Airbender, but more fun and less of a political consciousness than The Legend of Korra.

The new Voltron Paladins, unlike the previous iterations of the Voltron Force, are genuine and grow with their experiences. This character depth is helped by the fact that the 11-episode season is governed by a single, cohesive, plot arc. And even though the medium allows for some cartoonshness, there’s a great depth to everything that is going on. Emperor Zarkon and the Galra Empire are not some assemblage of finger-tenting idiot antagonists. They are the Galactic Empire – capable, organized, and fantastically powerful – and Voltron is the resistance. It’s a nice arrangement.

In 11 episodes of VLD, there are only two Robeast attacks. Dreamworks best move was unshackling the show from the audience’s expectations of what Voltron *ought* to be. It’s been a long time since I spent an entire Saturday watching cartoons, but Voltron Legendary Defender got the job done. As an adult, I may not get to have nice things on TV, but at least the kids can. There is some comfort in that. 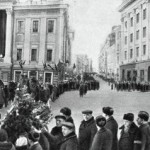 Stalin, Zarkon, and Depictions of the Strong Man