Following my battle with the chained ogre, I slipped through a hole in one of the many walls that divide the Ashina Outskirts. A recently acquired hand telescope let me survey my surroundings: four walls above a courtyard. I’ll admit “courtyard” might have been too kind of a word for what I saw. Stacked barrels rested against a wall, suggesting a space given over to more practical purposes. At best, the spit of stone, snow, and mud was a training pitch. Most likely, it was a storage depot where men happened to train. Despite this, General Tenzen Yamauchi stood with pride before his personal banner. The painted silk flapped gently in the wind. Almost a dozen of his retainers patrolled the walls and grounds around him. 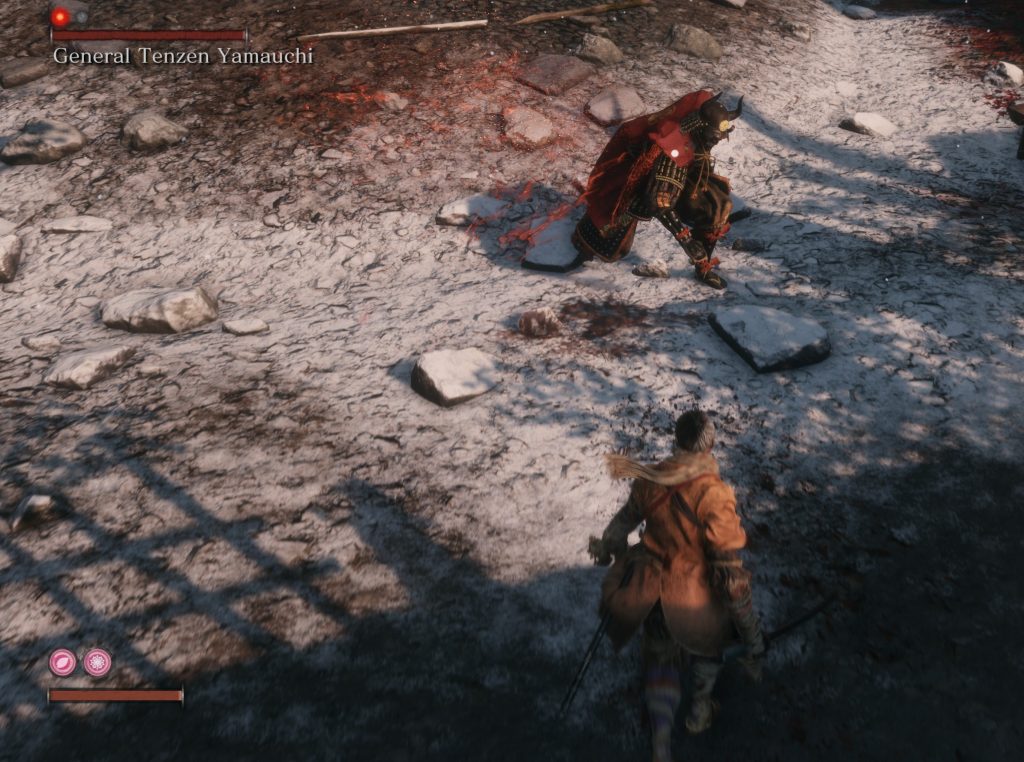 A Samurai looks his foe square in the eye. I stab them in the neck when their back is turned.

I snuck out from my vantage on to the left-most wall. Two retainers fell to Okami’s blade before the rest raised the alarm. My headphones rattled with what sounded like someone banging a pot with a wooden spoon. Gunfire sang from a matchlock. I ran back to the nearest Buddha statue to reset the world.

Once again, General Yamauchi stood before his banner. Retainers patrolled the walls, on the lookout for any who would bring harm to their master. The same two retainers tasted steel. I grappled on to the roof of a pagoda, thinking I could find a better vantage for Okami. The rifleman saw me and sparked off a shot. Six samurai gathered around the base of the pagoda and, once again, I ran back to Buddha.

General Yamauchi stood before his banner…and saw me stick my head through a hole in the wall. Fuck.

On the fourth effort the two samurai guarding the wall where the ogre was previously chained up decided to bring their A-game. I limped back to the Buddha statue with the thinnest tick of my life bar still intact.

By the fifth iteration I knew something had to give. Carving my way through the left wall to get to the General was a path to failure. My brilliant new plan: veer right. And on the right wall I saw a sleepy looking man clutching a copper pot and a stick. I crouched down and contemplated what was obviously a peasant pressed into the general’s service. If I took him down, I could work my way through the rest of the walls and not need to worry about bringing every retainer down on my head. If I took him down, I would be putting a half-starved peasant to the sword for my mission. 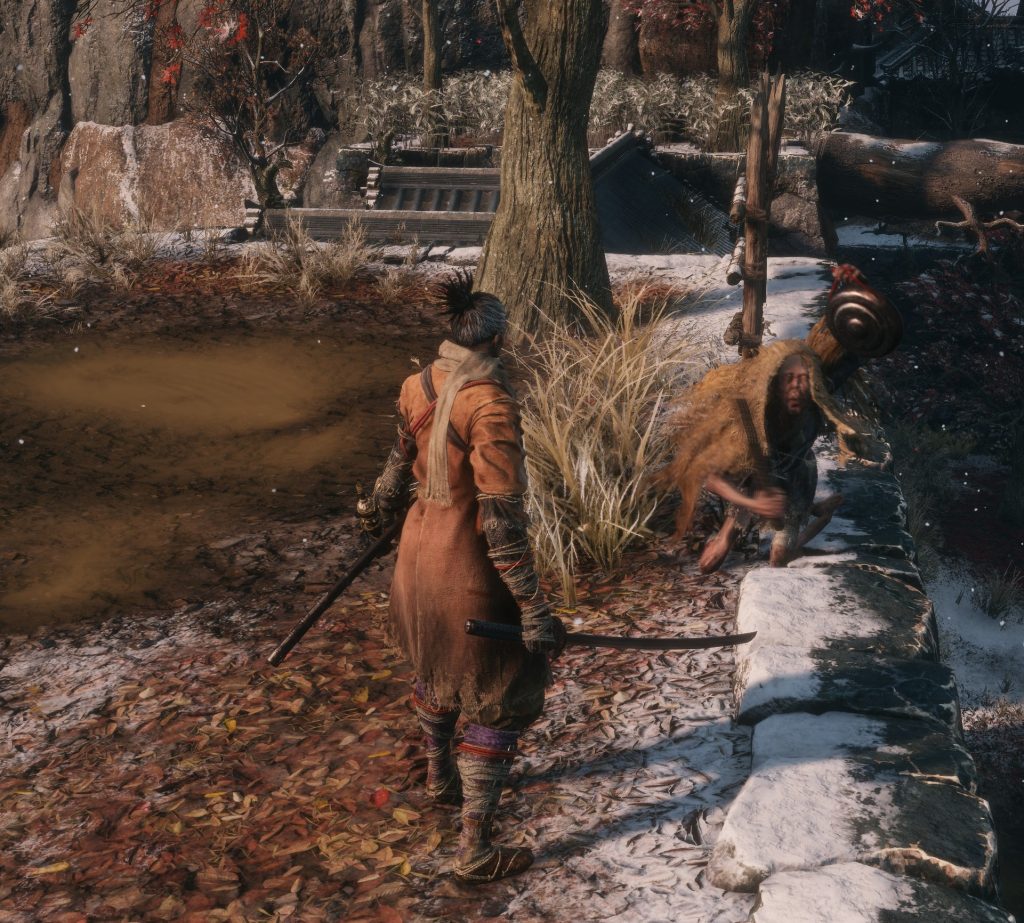 I’m not your enemy, Potman-kun, feudalism is your enemy.

Think on your sins, so says Sekiro.

It was easier to take down the rest of the guards having first dispatched Nagate Potman, a name I gave him as a way to immortalize the emotional beat of his death. Some fell at their posts. Others I led on a chase and used the game’s architecture against them. The dominos fell until it was only me and General Yamauchi. I stood next to Nagate’s corpse and watched the General walk back toward his stool.

“Now,” I thought to myself as I dropped off the wall, rushed to the general, and stuck my sword in his neck. It wasn’t honourable or fair, but I burnt that bridge when I killed Nagate. I had a choice then, a real choice beyond the tedium of good choice/bad choice dialogue wheels. I could have chosen to kill everybody but Nagate, leaving an obvious victim of a warrior-class dominated society free to go home to his wife, Yuki Potman, and his sons Mamoru and Gendo Potman. A samurai might have done just that. But Okami is shinobi – or so I tell myself to alleviate a now decidedly guilty conscience.

The fight was not flawless. I had to drain every charge in my healing gourd and use a resurrection after I mistimed Yamauchi’s back swing. But I was resolute I would win this fight in a single effort. Amid the clash of steel and blur of feints and counter-feints I noticed something in my fighting style. I didn’t need to check myself against button mashing. I was hanging back, keeping at a safe distance while I read his body language. I dashed a hair’s breadth ahead of his nodachi, striking only when the arc of his missed slashes left him off balance. When he thrust, I jumped on to his blade and buried in the dirt, stabbing through the joints of his armour.

Thus did General Yamauchi, and his retainers, fall before me. 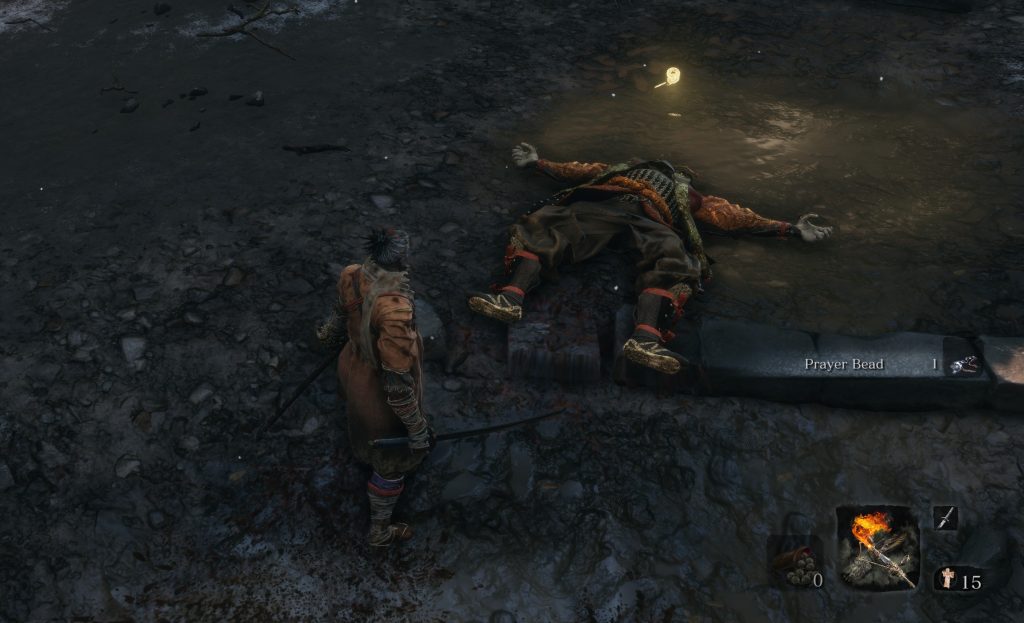 General Yamauchi, unburied and upturned in the mud

Technically, I know that the fallen samurai, and even Nagate, will be back following my next rest a Buddha statue. For narrative purposes, Okami and I have cleaved another bloody path forward. And on that note, nothing here feels like putting down hollows in Dark Souls. One could rationalize that brand of carnage through in-game lore.

Hollows were fellow undead who had long since lost any shred of humanity. They were reduced to shambling bodies, mindless in their eternal rage. Now I’m left to think on more tangible foes. I might rationalize the massacre with the knowledge that these samurai are complicit in the crimes of Lord Cenichiro. Then again, how many of them are trapped in a cycle of duty and obligation from which they can see no escape?

The valleys beyond General Yamauchi’s unburied corpse warn of spirits and phantasms. Perhaps they will prove a more morally simplistic foe.