Don’t worry, I’m not going to spoil anything. I’m putting this assemblage of stray thoughts here in lieu of doing a ten-tween long thread. Because, really, who likes reading ten-tweet long threads? I might like the content, but, come on people, medium.com is a thing for a reason. Or even better, your own blogs are a thing.com for a reason.

Thought 1 – I don’t know what sorcery has got us to the point where we can get away with F-bombs on basic cable, but I love it. Watching Shohreh Aghdashloo deliver Avasarala’s endlessly colorful dialogue is like poetry.

Thought 2 – I know the academy has problems with science fiction, and genre in general, but if the costume designer(s) for The Expanse don’t get some Emmy love, then it will be a blatant case of highway robbery.

Thought 3 – Does anybody else think that TV Amos comes off a little more…what’s the word…aggressively mercurial than in the books?

Thought 4 – The UNE flag has 3 stars above the Earth/Luna map. What do those stars represent?

Thought 5 – The show is being a lot more liberal with accelerations than the books. When the Roci was chasing Eros in the book, I don’t recall her getting much beyond a 7G burn. The HMS Wikipedia says that a typical human tolerance is around a sustained 5G. It speculates that more than a minute of a sustained 15G burn would have some serious consequences for the human body. Acceleration juice must be one hell of a drug. 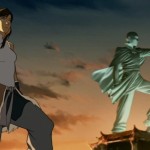